“This is the ritual law that Hashem has commanded: Instruct B’nei Yisrael to bring you a red cow without blemish, in which there is no defect and on which no yoke has been laid. Numbers 19:2 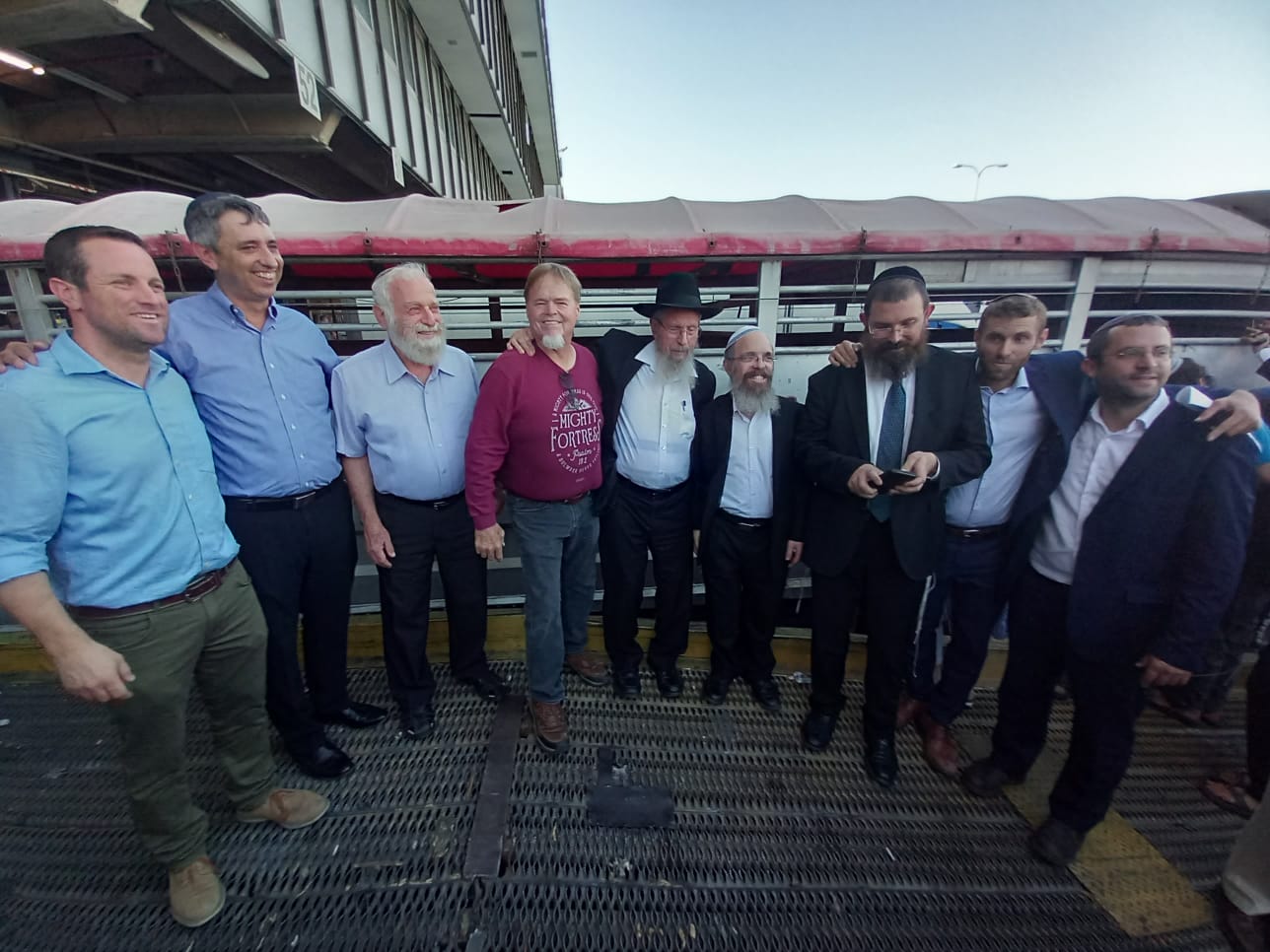 The Temple Institute and Boneh Israel made a huge step towards reinstating the Temple service on Thursday when five red heifers landed at Ben Gurion International Airport.

The red heifer was the main component in the Biblically mandated process of ritual purification for impurity that results from proximity or contact with a dead body.  Because the elements needed for this ceremony have been lacking since the destruction of the Second Temple, all Jews today are considered ritually impure, thereby preventing the return of the Temple service. The Temple Institute launched its  Red Heifer program about a decade ago, led by Rabbi Azariah Ariel. But even in Temple times, an animal that fulfilled the Biblical requirements was exceedingly rare. Failing to produce a suitable candidate from ranchers in Israel, The Temple Institute began investigating alternative sources for a red heifer.

Boneh Israel, an organization that connects Christian lovers of Israel to the Holy Land, stepped in to help. Led by Byron Stinson, a native Texan, Boneh Israel understood ranchers.

“I didn’t set out to do this, but right now, I am probably the best red heifer hunter in Texas,” Byron quipped. “The Bible says to bring a red cow to purify Israel, and I may not understand it, but I am just doing what the Bible said.”

“The prophecies came true, and the Jews are back in Israel,” Byron said. “Now they need to build a Temple. But it’s like buying a really nice car. If you don’t have the key, you aren’t going anywhere. The red heifer is the key to making the Temple work like it’s supposed to.”

Boneh Israel took out full-page ads in ranching magazines, explaining the situation to ranchers. They requested that any red calves be set aside.

“Several years ago, the farmer is a devout Christian who became intensely interested in the Biblical commandment,” Stinson explained to Israsel365 News.”He began breeding cattle for this trait. So when my team and I set out to search ranches in Texas for a red heifer, his were already better suited.”

One of the major difficulties was that the government requires tagging calves right after birth. The ear tag creates a hole in the calve’s ear, a blemish that disqualifies the calf for the Mitzvah. The farmer explained that because of COVID, the employee who normally puts in the tags did not come to the farm when these five calves were born.

A team of rabbis from the Temple Institute flew out to inspect the calves last year. The requirements are incredibly demanding, requiring that there be no more than two non-red hairs on the entire calf.  It must also never have been used for any labor or have been impregnated. The heifer must be two years and one day old to be suitable for the ceremony. Sometimes, a calf that is perfectly red when it is young develops black or white hairs as it grows older or may develop a blemish. Sometimes, the colored hairs fall out or disappear. Certifying the calf requires a complete and intensive inspection in which a rabbi knowledgeable in the laws goes over the entire calf with a magnifying glass.

Chanan Kupietzky, an Orthodox Jewish resident of Efrat, is the liaison between Boneh Israel and the rabbis of The Temple Institute.

“The Jews don’t need to be pure to build the Temple or to bring the public sacrifices,” Chanan explained. “On the other hand, purity will take it to the next level and will facilitate rebuilding the Temple and doing the service.”

“Education is essential to move forward, for the Jews and non-Jews,” Chanan said. “Boneh Israel is an Israeli organization whose main goal is education.”

The cows were between 5-8 months old. To be suitable for the red heifer ceremony, the cow must be two years and one day old so these heifers will be raised in Israel until they reach the proper age.

Chanan pointed out that last year was 5781 in the Hebrew calendar.

The Talmud has a precedent for the red heifer being provided by a non-Jew. The Talmud (Kiddushin 31a) tells the story of the non-Jew named Dama who would not wake his father, Netina, to get to the key under his pillow to retrieve the stones to sell for the breastplate of the High Priest at a price of 600,000 dinars. Dama forfeited this great sum simply so as not to disturb his father’s sleep. He was rewarded the following year by finding in his flock and selling a rare red heifer to the rabbis for the same sum.

From the time of Moses, who personally prepared the first heifer, until the destruction of the Temple, only nine red heifers were prepared. Nonetheless, this was sufficient to maintain the ritual purity of the entire nation for almost 2,000 years.According to Jewish tradition, there will only be ten red heifers in human history with the tenth heifer ushering in the Messianic era. Rabbi Moshe ben Maimon (Maimonides), the most renowned medieval Jewish scholar known by the acronym Rambam, wrote in his explanation of the mitzvah that “the tenth red heifer will be accomplished by the king, the Messiah; may he be revealed speedily, Amen, May it be God’s will.”

Israel365 News will be running a series of articles on this miraculous development in the Redemption. We would like to thank The Temple Institute for its incredible efforts in bringing this about. We would also like to thank Boneh Israel for their service to the Nation of Israel. People who wish to take part in this effort should visit the Boneh Israel website and the Temple Institute website.

NOTE: This article and its images and videos are the exclusive property of Israel365 News and may not be reposted or copied without written consent. To repost, quote the first hundred words of the article and then link to our website.