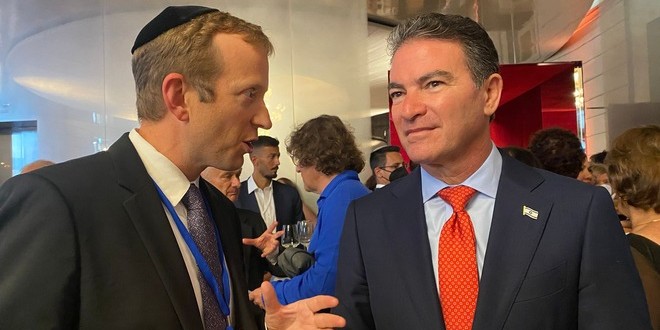 A few weeks ago, 1,500 Zionist leaders descended upon Basel, Switzerland, for the 125th anniversary of the First Zionist Congress. The inspiring celebration showcased Israel’s many miraculous achievements since the days of Theodor Herzl, and I was honored to be included. Yet, the organizers missed a major opportunity by leaving out two of Israel’s most important stakeholders: haredi Jews and evangelical Christians.

Dozens and dozens of Jewish leaders from the worlds of politics, business, philanthropy and more represented their constituencies and added their voices to important conversations about Israel’s future. However, not a single Christian Zionist or haredi Israeli Jew spoke about their crucial and complex relationship with the Jewish state.

Israeli media regularly calls for more haredi integration into Israeli society, yet the only haredim who were invited to speak in Basel were a hassidic judge from Borough Park and a Chabad rabbi from Ukraine. Perhaps in Herzl’s times, it was not clear that there would be a future for traditional Judaism, but today, the ultra-Orthodox community is growing twice as fast as the overall Israeli population and will represent more than 25% of the country within two decades.

If Zionist leaders truly want to integrate haredim into Israeli life, we must show respect to their communities by inviting their thought leaders and innovators to share their hopes and concerns for the future of Israel. So many of the panels and plenary sessions called for more respect and tolerance in the name of Jewish diversity, but it seems like the big tent of Zionism only has room for certain kinds of Jews.

At the same time, for decades, anyone concerned about Diaspora Jewry’s declining support for Israel has only been able to sleep at night thanks to the overwhelming support of evangelical Christians. While the percentage of American Christians who support Israel has been steadily declining in recent years, there are still tens of millions who do support the Jewish state. Rather than ignore these vital stakeholders, we must do much more to welcome them in and thank them for their friendship.

It’s hard to imagine that with their eyes on history, the World Zionist Congress organizers simply forgot about these two important communities. There was great attention paid to every detail, with special focus on the nuances of the 1897 Congress and repeated references to Herzl’s almost prophetic event.

Back in the 19th century, a handful of Christians helped make Herzl’s dream into a reality.

Reverend William Hechler was a minister with the British Embassy in Vienna and an early reader of Herzl’s The Jewish State. Hechler immediately became Herzl’s chief advocate and proceeded to introduce him to leading statesmen, including the German Kaiser Wilhelm II.

While the great Jewish financier Baron Hirsch told Herzl his grandiose plans were delusional, Hechler’s connections provided great legitimacy for the assimilated journalist with no previous credibility or standing in the Jewish community.

Herzl had a great deal of gratitude toward those Christians who assisted him along the way. Of the 200 delegates to the original Congress in 1897, there was a minyan of non-Jews invited to attend as special guests.

Although they were not given voting rights (nor were women), 10 Christians were present at the First Zionist Congress, including Henry Dunant. Dunant was a Swiss banker and humanitarian activist who founded the Red Cross. As early as 1866, more than 30 years before Basel, Dunant began advocating for the restoration of the Jews to Palestine. Herzl referred to Dunant as a Christian Zionist, which was the first time that term was ever used.

In addition to Hechler and Dunant, present in Basel were: Lt. Colonel C. Bentick from England; I.W. Bouthon-Willy of Vienna; daughter of the Protestant bishop of Jerusalem, Maria Kober Gobat, who contributed the gavel used to open the Congress; German Protestant missionary Pastor Dr. Johann Lepsius of Berlin; Baron Maxime von Manteuffel of St. Michele, France who maintained a training farm for young Jewish agriculturists; the Reverend John Mitchell; member of parliament and president of the Swiss National Council, Prof. Paul Speiser; and the author, Prof. F. Heman of Basel.

Over the past century and a quarter, Christian Zionism has moved from the sidelines to center-field, which is why their absence last week from the official World Zionist Congress event was particularly shameful. We missed a historic opportunity to thank them for their long-lasting support and to listen, and try to understand what it will take to ensure their support for additional generations.

What haredi Jews and evangelical Christians have in common is clear, and it makes many Israelis uncomfortable. Both groups are unabashedly religious and when it comes to the identity of the “Jewish state,” they are more concerned about the former, than the latter.

We ignore the fast-growing and vibrant haredi community along with tens of millions of Christian Zionists around the world at our own peril. For the sake of Israel’s future, we must stop living in the past and in our own echo chambers in order to truly strengthen Zionism for the next 125 years.