Men from your midst shall rebuild ancient ruins, You shall restore foundations laid long ago. And you shall be called “Repairer of fallen walls, Restorer of lanes for habitation.” 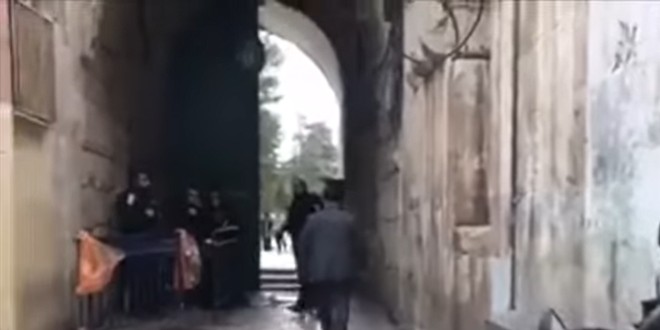 This morning marked Rosh Chodesh (the new month) of Elul, an auspicious day, so hundreds of Jew ascended the Temple Mount. Usually, Jews are restricted to one entrance to the site, but today, through a strange string of events, the Israeli police led a group of Jews through a different gate. One Temple Mount advocate believes the incident is hugely significant, establishing a precedent that exposes the lies of the “status quo.” More significantly, the incident presented a possible solution to a dangerous situation that has been ignored by authorities.

This morning, several hundred Jews lined up along the covered wood ramp that leads up to the Mughrabi Gate leading into the Temple Mount Compound. While one group of about fifty people toured the compound, six of the participants performed the Biblical mitzvah of prostrating themselves before God, which can only be performed on the Temple Mount. This violates the guideline set out by the Israeli police who stepped in to remove the entire group from the Temple Mount.

For unknown reasons, the police chose to lead the group through the Gate of the Tribes in the northeastern corner of the Temple Mount. Even more surprising was the police’s decision to return many of the people from the group through the same gate rather than prohibit their return or lead them back onto the site via the Mughrabi Gate.

Akiva Yoel Ariel, the Director of Community Relations for Beyadenu, a Temple Mount activist group, noted that this was the first time ever that a Jewish group entered by any other than the Mughrabi Gate. But, he noted, the most significant aspect of the event was what didn’t happen.

“There were many Arabs who witnessed this, and they did not react,” Ariel told Israel365. “The gates are all the same for the Muslims. There is no reason why we should be required to use only or specifically the Mughrabi Gate.”

Ariel noted that entering by the Mughrabi Gate poses a real and imminent threat to the public. Experts have long claimed the bridge leading up to the gate was unsafe. The wooden bridge connecting the Western Wall Plaza with the Mughrabi Gate was built in 2007 as a temporary replacement for an ancient stone and earth ramp that collapsed in 2004. Due to complaints by the Waqf, the bridge was never replaced. Last year, a structural engineer wrote an official letter to the Western Wall Heritage Foundation after finding “extreme dryness” and “many longitudinal cracks,” warning that the bridge was in danger of collapse.

“When visitors are forced to wait on the bridge, we can feel it swaying under our feet,” Ariel said.

“If we can leave by the Chain Gate, then why can’t we enter by the Chain Gate,” Ariel said. “We should be able to use the Iron Gate. Today we saw that the Gate of the Tribes is also available for entrance and exit. Lives are at stake here.”

The Temple Mount has twelve gates, one of which, Bab as-Sarai, is now closed to the public but was open during Ottoman rule. There are also six other sealed gates. Until now, only one, the Mughrabi Gate, was open to non-Muslims. The Mughrabi Gate was renamed the Hallel Gate by the Jews who are active in the Temple Mount in memory of Hallel Ariel, a teenage girl who was stabbed to death by a Palestinian in 2016.