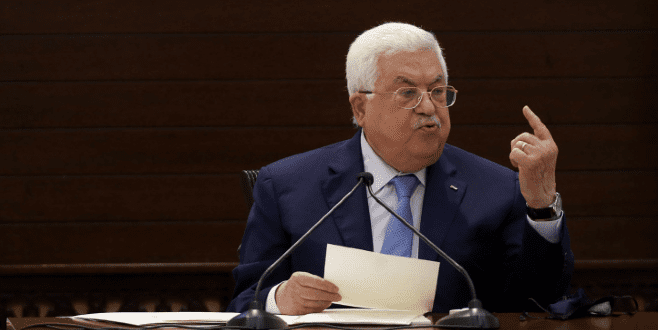 There’s something almost pathetic about the outrage generated after the latest comments by Palestinian Authority leader Mahmoud Abbas. In Berlin for a meeting with German Chancellor Olaf Scholz, who was standing with him, the Palestinian was asked about his role in funding the 1972 Olympic massacre of 11 Israeli athletes and coaches in Munich, and whether he ought to apologize on the 50th anniversary of that infamous crime. In response—and speaking in English so that there could be no doubt about his meaning—he said: “If we want to go over the past, go ahead. I have 50 slaughters that Israel committed … 50 massacres, 50 slaughters, 50 holocausts.”

Of course, this unrepentant and libelous comment deserves to be harshly condemned. Israeli Prime Minister Yair Lapid was entirely correct to say that for Abbas to falsely claim that the Jewish state had committed “holocausts” while standing on German soil “is not only a moral disgrace but a monstrous lie. Six million Jews were murdered in the Holocaust, including one and a half million Jewish children. History will never forgive him.”

Other condemnations, such as that of Scholz, who, to his shame, did not contradict Abbas when he uttered these words in his presence, were also angry and entirely justified.

But the fury about this seems both oddly misplaced as well as somewhat hypocritical, especially when it comes from those in Israel, Europe and the United States who have spent so much energy and time puffing up Abbas as a partner for peace and doing their best not only to appease him, but to pressure the Jewish state to accommodate his every demand.

This was no gaffe. Abbas’s long career has been nothing of a series of offensive actions, decisions and statements that should have long ago convinced the civilized world to shun him completely. After a lifetime of criminal behavior in which he has aided and abetted the slaughter of countless victims of terrorism, coupled with corruption and opposition to peace, the real question about this incident is why anyone should bother getting upset about a mere offensive comment from such a person?

After the fact, the P.A. issued a statement claiming that it condemned the Holocaust, although it did so without admitting that among those cheering it on at the time and providing help to Adolf Hitler was the Mufti of Jerusalem, Haj Amin el-Husseini, then the leader of the Palestinian Arab cause. Nor did it contain an apology but rather a claim that Abbas was referencing “massacres” of Palestinians committed by the Jews since the Nakba, or the founding of Israel.

Abbas has a personal connection to this issue in that the doctoral thesis he authored while studying at the Patrice Lumumba University in Moscow was a lengthy exercise in Holocaust denial, titled “The Other Side: The Secret Relationship Between Nazism and Zionism.” That is also something for which he has never apologized.

The 87-year-old Abbas served as an aide to Palestine Liberation Organization chief Yasser Arafat, who was also head of the Fatah Party that he now leads. Abbas played a number of roles in the terrorist network, including organizing the funding for its atrocities such as the Munich massacre.

Unlike his boss, Abbas preferred a more corporate image. That served him well when he succeeded Arafat as the leader of Fatah in 2004 after his death. The following year, he won election to a four-year term as president of the P.A. Since he has refused to hold another election—lest he be defeated by the Islamists of the Hamas terror group that rules the Gaza Strip—Abbas is currently serving the 18th year of that four-year term in office.

Shocked by the slaughter of the Second Intifada, the Palestinian terrorist war of attrition that had been Arafat’s answer to Israel’s offer of peace and an independent Palestinian state at the Camp David Summit in 2000, former President George W. Bush had cut off relations with the P.A. But with Arafat gone, the president was persuaded that Abbas would be the catalyst for peace the Palestinians had long needed and aid resumed pouring into the P.A.

Abbas was anything but a force for peace. Even though it was a cheap price to pay for the independent state the Palestinians had always claimed to want, Abbas was just as adamantly opposed to recognizing the legitimacy of a Jewish state, no matter where its borders were drawn, as Arafat had been. When then-Israeli Prime Minister Ehud Olmert offered an even more generous map of a Palestinian state in 2008, Abbas still wouldn’t say “yes” since peace alongside Israel has never been his goal. Despite the efforts of the Obama administration during its eight years in office to tilt the diplomatic playing field in the Palestinians’ direction, Abbas continued to torpedo negotiations. He was equally unwilling to talk to the Trump administration.

Rather than reform the P.A. as the United States and its European allies hoped, Abbas doubled down on Arafat’s legacy of intransigence. That meant that the official Palestinian media and the education system in the West Bank that he controlled continued to foment violence and hatred for Jews and Israel.

While sometimes making noises about wanting peace to Western audiences, Abbas has continually spoken to Palestinians about the need to reverse the 1917 Balfour Declaration and Israel’s illegitimacy, and followed in the Mufti’s footsteps by claiming that the Jews were going to destroy the Temple Mount mosques (namely, Al-Aksa), denied the historical connection of the Jews to Jerusalem and its holy places. He even said that “dirty Jewish feet” should not profane the city’s shrines, something that helped foment the so-called “stabbing intifada.”

Abbas plays a double game since he also authorizes security cooperation with Israel. But it should be understood that this enables the Israelis to guarantee his security against threats from the killers of Hamas and Palestinian Islamic Jihad.

Abbas, along with his family and friends, has grown wealthy by stealing vast sums of money that have poured into the territories in the form of aid from the rest of the world. His intransigence against peace keeps Fatah from losing out politically to Hamas in the bizarre Palestinian political culture in which violence and bloodshed provide legitimacy. But it is his corruption that has discredited his rule and the reason why he is afraid to hold another election.

At this point, there’s no longer any doubt that Abbas has done more to exploit and perpetuate the suffering of his people than anything he falsely accuses Israel of having done. A career criminal, his Berlin statement is just one more in a long litany of offensive statements and gestures.

Nor is there any indication that his refusal to make peace is anything other than what Palestinians, whose national identity is inextricably linked to a 100-year-old futile war against Zionism, want from him or any potential successor.

If a lifetime of hate, crime and corruption has not discredited him in the eyes of those who continue to call him a “moderate” and Israel’s preferred peace partner, why would anyone expect his talk of “holocausts” to change that? It won’t prevent him from being treated respectfully by President Joe Biden and a host of other foreign leaders who consider him as an equal and who regularly engage in pressuring Israel to mollify him. None of them have shown any willingness to follow in the footsteps of former President Donald Trump, who angrily demanded that Abbas stop funding terror in the form of the P.A.’s “pay to slay” program.

Seen from that perspective, it’s difficult to understand why anyone is even bothering to voice outrage against what Abbas said in Berlin. The point being: If you want Israel to make dangerous concessions to such a person, then don’t waste everyone’s time with pro forma condemnations of Abbas saying terrible things. His deeds are far worse than his words, and those who continue to demand that he be treated as a head of state are nothing but hypocrites.