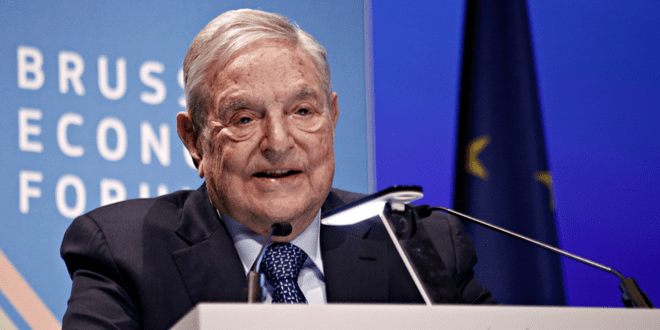 It’s long past the point in today’s hyper-partisan atmosphere where anyone should be surprised at how low and how dishonest political discourse can be. But is it really too much to ask that we reserve charges of anti-Semitism for cases where it actually exists?

That ought not to be hard since there are plenty of examples of both left-wing and right-wing anti-Semitism to talk about. There’s plenty of blame to go around when it comes to the problematic associations that dog both Democratic and Republican politicians that tie them to anti-Semites. But there is something particularly dishonest about the way the political left continues to insist that when you hear criticism of billionaire hedge-fund investor/philanthropist/political activist George Soros, what you’re really hearing is thinly disguised hatred of Jews.

The latest example was the reaction to a speech on the U.S. Senate floor by Florida Republican Marco Rubio. He was pleading for the body to devote some attention to the problem of the breakdown of law enforcement in America’s cities. While doing so, he referred to the large number of prosecutors whose campaigns were funded by Soros who are essentially destroying the criminal-justice system by refusing to enforce the law and put offenders in jail. But the response from left-wing Twitter, as well as pundits like The Washington Post’s Max Boot, was to claim that “Every time Republicans say ‘Soros’ you should hear ‘the Jews.’ Unfortunately, this repugnant rhetoric thrills the GOP base.”

What’s especially infuriating about this canard is not just the willingness to cry wolf in this manner at a time when there is a broad consensus that there is a rising tide of anti-Semitism sweeping across the globe. It is just how transparently dishonest this talking point is.

Soros’ Open Society Foundation is widely acknowledged as the largest political donor in the world, funding a host of left-wing causes and politicians in Europe, the United States and elsewhere, including Israel. But in recent years, he’s been especially interested in an effort to transform the justice system and to elect district attorneys who believe too many people are being prosecuted and jailed. The result has, as Rubio and many others have rightly noted, been a catastrophe for the quality of life in American urban centers as Soros-funded prosecutors have undermined the police and turned crime into a low-risk profession. Crime rates have soared, and police have been discouraged from doing their jobs since many DAs in cities like San Francisco and Philadelphia simply won’t pursue charges against any but the most serious of crimes—and not always even then.

The point about this is not just that Soros’s quest to “reform” the justice system has arguably done more damage to the country than anyone in living memory; it’s that he is proud of what he’s been doing. Only a week before Rubio’s speech, The Wall Street Journal published an op-ed from Soros in which he wrote: “This is why I have supported the election (and more recently the re-election) of prosecutors who support reform. I have done it transparently, and I have no intention of stopping. The funds I provide enable sensible reform-minded candidates to receive a hearing from the public.”

Not only is it not a smear to refer to “Soros prosecutors,” it’s something that the billionaire is willing to boast about.

It’s true that Soros has been subjected to some actual anti-Semitic attacks during his long career in business and activism. He’s also been falsely accused of funding the violent protest group Antifa and Black Lives Matter riots, although his support of other dubious left-wing activists, including those attacking Israel, is all too real.

He remains the archetype of the traditional trope about Jews and money, and supposedly dark forces manipulating the global economy. But it is equally true that Soros’s past record as a hedge-fund operator and currency speculator has resulted in actions that had devastating consequences. His 1992 gamble against the pound sterling virtually broke the Bank of England and cost British taxpayers more than 3 billion pounds. He did the same thing to Malaysia and Thailand in 1997, causing a regional financial crisis. That didn’t excuse the anti-Semitic responses from those who suffered losses but resentment of the way he profits from the misery of others is hardly unreasonable. That left-wingers who are otherwise appalled by the excesses of capitalism yet like the way he spends his money on politics reflexively defend him is hypocrisy on an epic scale.

It’s not just that the trope about criticism of Soros being anti-Semitic is false. It’s that a lot of the people who are quick to reach for this dishonest argument are themselves guilty of real anti-Semitism.

The most outstanding example is Randi Weingarten, the president of the American Federation of Teachers. Weingarten is a serious player in American politics since her union is one of the biggest donors to the Democratic Party PACS as well as a supporter of spreading toxic ideas like critical race theory that grant a permission slip for anti-Semitism. Last year, while trying to defend the egregious role her union played in keeping schools closed during the COVID pandemic doing incalculable harm to children, she actually blamed Jews for the problem, saying that they were “part of the ownership class” who, “wanted to take away the ladder of opportunity from those who do not have it.”

Yet this week Weingarten, who is herself Jewish, was spouting the Democrats’ talking point about how referring to Soros’s pet prosecutors is “how anti-Semitism takes root and spreads.” That’s dishonest but also evidence of deflection.

Boot is interested in using the sympathy that some on the American right have for Hungarian Prime Minister Viktor Orbán, a virulent critic of Soros for his involvement in his country’s politics, as proof that the GOP is both anti-Semitic and fascist. Orbán’s political stands in which he calls for an “illiberal democracy” and preserving the traditional ethnic character of his nation don’t translate well into the American political ethos. But as a democratically elected leader, he’s no fascist. Nor is he an anti-Semite, as Hungary’s Jewish community remains far more secure than those in liberal Western Europe.

Boot was once a conservative and an ardent defender of Israel before switching sides because of his antipathy for former President Donald Trump. His dislike of the GOP even led him to join the pack of left-wingers who attack the Jewish state and sympathize with their foes in the Gaza Strip at a time when such libels helped foment anti-Semitic violence in the streets of American cities in May 2021.

Yet for many on the left, it’s become commonplace to assume that anyone they don’t like, including Trump, is not just wrong but an anti-Semite, despite abundant evidence to the contrary. It’s also a way to distract us from the fact that a growing number of Democratic-elected officials, principally the left-wing congressional “Squad,” are open supporters of the anti-Semitic BDS movement, and like Weingarten, behind efforts to mainstream Jew-hatred under the guise of fighting “white supremacy.”

The long-debunked efforts to link criticism of Soros to anti-Semitism are not just a distraction from actual anti-Semitism. The persistence and the popularity of this line of attack render efforts to unite both major parties and Americans against this noxious form of hate all but impossible. The sad truth is that a country where an accusation of anti-Semitism has become not just a cheap political smear but a ruse to cover up the very real targeting of Jews is one where the guardrails against prejudice have disappeared.