Home » On Ben Shapiro and Aliyah 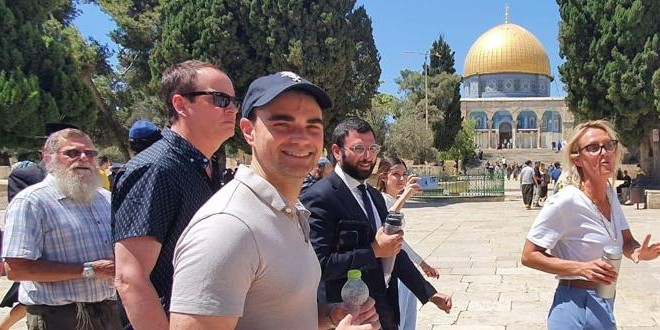 Founded nearly five decades ago in the United States, CPAC has become the largest and most important gathering of political conservatives in America, serving as both a platform and a laboratory for fresh ideas and policy prescriptions.

The initiative has expanded internationally, seeking to connect like-minded conservatives from different countries and backgrounds and build a global and influential network.

Headlining the event in the Jewish state was none other than Ben Shapiro, the whip-smart Orthodox Jew who hosts one of the most popular conservative podcasts and radio shows in the United States.

Over the years, Shapiro has demonstrated an almost fearless determination to espouse his views, never shying away from debate or confrontation, while delivering his message in cogent terms.

His impressive résumé, which includes learning to play the violin at a young age, publishing 11 books and graduating with honors from Harvard Law School, clearly indicates that he is, in short, a genius.

But even geniuses make mistakes, and when he was asked on stage at CPAC by Channel 12’s Amit Segal about aliyah, Shapiro offered up quite a doozy.

Pointing out the demise of powerful Jewish communities such as those that lived in Spain in the 15th century and Germany in the 20th century, Segal asked Shapiro, “Do you ever wonder if one day you’ll have to flee the United States?”

After noting that Diaspora Jews throughout history have always lived with concerns about their safety, Shapiro pivoted and made a point that is not only counterintuitive but also deeply troubling.

“The existence of the State of Israel,” he asserted, “is the single greatest guarantor of my loyalty to the United States…. Because Israel exists, that means the United States is going to be a more welcoming place for me, because Israel is there as a backstop in case anything should go wrong.”

This is nothing less than a complete inversion of one of Zionism’s most basic principles and fundamental goals.

To borrow a term from baseball, Israel is not a backstop for Diaspora Jewry; it is home plate. Rounding the bases of exile safely and reaching home is the ultimate goal, both for the individual and for the team.

All those who lived and died to establish a Jewish state, all those who dreamt of Zion down through the ages and prayed fervently to set foot on its sacred soil, would surely be aghast at the thought that their yearning and sacrifice was now being used to justify remaining in exile.

Indeed, the lifeblood of Zionism is aliyah, which is a source of ongoing strength to the Jewish people. And it is aliyah, not the American Constitution, that is the surest guarantee of a vibrant Jewish future.

Not satisfied with Shapiro’s response, Segal pressed him further, telling him that he had dodged the question, before bluntly asking, “Why won’t you make aliyah to the State of Israel?”

Here, too, Shapiro swung and missed, responding, “because the fundamental principles of the United States are good, eternally good, and worth upholding. And my fight to do that, as a Jew, is deeply important – not just to people who are not Jewish, but particularly to Jews.”

It was precisely this kind of thinking that Theodor Herzl, the father of modern-day political Zionism, sought to counter when he wrote, “Nothing prevents us from being and remaining the exponents of a united humanity, when we have a country of our own. To fulfill this mission we do not have to remain literally planted among the nations who hate and despise us.”

In other words, there is nothing to prevent Jews from promoting values worldwide from the safety of their own national home. This is even truer today, when the Internet and other means of technology make it possible to reach audiences across the globe no matter where one is located.

I SINCERELY do not mean to pass judgment on Shapiro’s personal decisions about where he chooses to live or to raise his family. Immigration is neither simple nor easy, and I do not believe that it is my right or anyone else’s to criticize others on this issue.

But as a prominent Jewish thought leader, and particularly one who proudly sports a yarmulke and does not shy away from identifying as an observant Jew, Shapiro is sending a very wrong message to his legions of followers by unwittingly diminishing the importance of aliyah.

Just imagine if tens of thousands or even a few hundred thousand of Shapiro’s American Jewish listeners could be swayed to move to Israel and the vast impact that would have on Israeli society and the Jewish future.

So, rather than turning Zionism on its head and using it to strengthen the Jewish presence in the Diaspora, Shapiro would do well instead to recall the exhortation of Joshua bin Nun to the people of Israel some 3,000 years ago, “How long will you be remiss in coming to possess the land which the Lord, the God of your fathers, has given to you?” (Joshua 18:3).

“How long will you be remiss in coming to possess the land which the Lord, the God of your fathers, has given to you?”

Despite the passage of so much time, those words still resonate, calling out to every Jew wherever he or she may be to finally and lovingly come home.