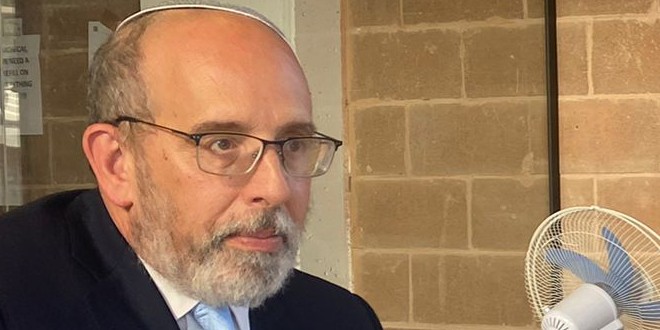 Rabbi David Fine, a religious oleh from the US who now resides in Modiin, has announced his candidacy for the Religious Zionist Party primaries. The right-wing party is headed by MK Betzalel Smotrich and hopes to steal many seats from Netanyahu’s Likud party. The party’s primaries are set to take place ahead of the upcoming Knesset elections.

The 54-year-old Fine served as a pulpit rabbi in Milwaukee and Kansas City prior to immigrating to Israel in 2008. The father of four is considered to be a pillar of Modiin’s sizeable English-speaking community. Upon arriving in Israel, Rabbi Fine developed a program that trains Israeli rabbis to be community leaders, a concept he laments doesn’t exist in Israel.

Describing himself as a political junkie since he was a kid, Fine, a long-time Aliyah advocate, believes that as a Member of the Knesset, he can help advance the needs of Israel’s new immigrants hoping to build their new lives in the Promised Land.

In an exclusive interview with Israel365 News, the rabbi acknowledged that as a Knesset Member, he likely would not have a lot of influence on security and defense matters. But he does believe that he can improve Israel’s economy.

Rabbi Fine also expressed concern regarding the “Jewish character of the State of Israel,” which he believes is “at risk.” When asked to elaborate, the rabbi feared that on the issues of Shabbat and keeping kosher, Israel is being “influenced by the progressive ideals that the rest of the world are.” He added that the festering trend among American Jews becoming more progressive in their political leanings is “a great threat.”

Vowing not to be a “yes man” for party leader Smotrich, Rabbi Fine is advocating for Sundays as a day off. In Israel, the current weekend only consists of Saturdays and, for some, Fridays. But Rabbi Fine believes that the extra free day can “solve a lot of problems in Israeli society.” He also hopes to integrate more olim into society for employment, a problem he believes needs more attention from the government.

Rabbi Fine claims that the biggest obstacle to Aliyah is housing prices which he hopes to tackle. However, he admitted that he doesn’t yet have a plan to reduce housing prices, acknowledging that he has to do his “homework.”

Regarding his approach to policy-making, Rabbi Fine intends to take the same approach he took as a community leader, which involves “listening and learning before you react.”