Nations 9th of Av: Bringing the prophesied change from feasting to fasting

Home » Nations 9th of Av: Bringing the prophesied change from feasting to fasting 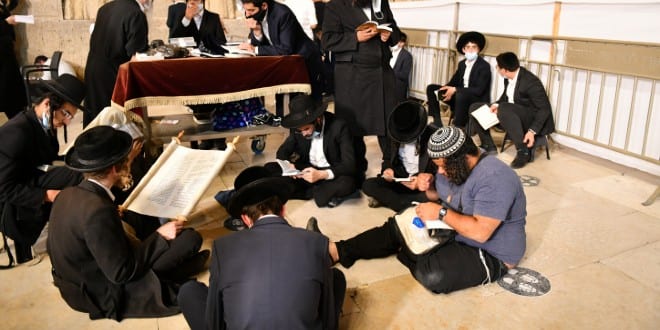 A Christian initiative attempts to reconcile the tragic history of Jewish-Christian relations in a manner that may be the catalyst to bring about the prophesied change, turning the austere fast day of Tisha B’Av into a day of feasting and joy.

A Christian initiative begun about five years ago by Bob O’Dell, the founder of Root Source, attempted to address the long history of difficult relations between Jews and Christians. The event held concurrently with the Jewish holiday will include 25 hours of prayer and fasting by participating Christians. The event will be broadcast on Zoom and streamed live on YouTube. A live event will bring Jews and Christians together in Independence Park in Jerusalem for a live reading of Lamentations. There will then be a walk of the walls of Jerusalem and an ascension to the Temple Mount with Rabbi Yehudah Glick.

Steve Wearp, one of the organizers of the Tisha B’Av event and the founder of Blessed Buy Israel, emphasized that the event was a Christian event that did not come to replace or mimic the Jewish Ninth of Av.

Tisha B’Av, the ninth day of the Hebrew month Av, begins on Saturday evening and ends on Sunday evening. Coming at the end of a three-week period of austerity, the day commemorating the destruction of both Jewish temples is observed as a day of fasting. The day is also identified with a long list of tragedies that befell the Jewish people, including the Biblical spies’ evil report about the land of Israel, the tragic  Bar Kochba revolt against the Romans, and even the expulsion of Jews from England in 1290 and Spain in 1492.

“The Lord has blessed me with a heart for Israel, and I want to see the restoration between the Jewish and Christian communities,” Steve said as an explanation for his involvement. “We need to repair the damage done by Christianity over the past several millennia. Tshuva, repentance is not just an action. It is incumbent upon us to actually change things for the better and to bring healing to the relationship without any arrogance or agenda. We need to be a blessing in order to receive a blessing.”

Wearp believes the first step in repentance is an acknowledgment of responsibility, what he describes as “taking ownership of your past,” as per a verse in Proverbs:

He who covers up his faults will not succeed; He who confesses and gives them up will find mercy. Proverbs 28:13

Toward this end, they have posted an online declaration based on a list of atrocities carried out by Christians against Jews, focusing on those occurring on the ninth and tenth days of the Hebrew month of Av. Bob O’Dell, Christian co-founder of Root-Source, a web-based initiative that facilitates Israeli Jews teaching Christians worldwide.

“I don’t think Christians really understand this history, and many times, they will disassociate from it, saying that those weren’t real Christians or it wasn’t really Christianity. These acts were done by Christians saying they were doing hideous things against the Jewish people in the name of God. I think it was based in jealousy. Of course, they were taking God’s name in vain. but this is how the world experienced it and still perceives it.”

“The rabbis say that the Temple was destroyed because of the baseless hatred that existed in Israel at the time. But there has been a baseless hatred that Christianity has had toward the Jewish people. My hope is to replace that with a baseless love that has no agenda, conditions, or strings attached. We have to accept Jews precisely as they are. This is how we, as Christians, can help fix the destruction of the Temple.”

Wearp admits that reconciling after 2,000 years of difficult history is daunting, but he notes that it is hugely important for Christians.

“We need to come with a humble heart, recognizing that God has called the Jewish people to fulfill a calling and a destiny. Our role, as Christians, is to lift them up so they can accomplish that task. This is what we can do, and that will transform the fast days to feast days.”

Wearp cited Psalms as describing a process of dialogue between the nations and the Jews resulting in the praising of God:

“Our mouths shall be filled with laughter, our tongues, with songs of joy. Then shall they say among the nations, “Hashem has done great things for them!” Psalms 126:2

“We need to turn our faces to Jerusalem and tell the Jewish people that we want to ascend with them together. The geula (final redemption) is not ushered in by the Jewish people alone, but it’s dependent upon the nations taking our place.”

“A lot of Christians are finding that they no longer have a place in normative Christianity. By loving Israel, by recognizing that we are living the Prophecy, we are having an identity crisis.”

“The problem is that we also don’t have a place alongside the Jews yet. The Jewish people need to teach us, to guide us. We need a much closer relationship. But we can’t barge in. The Jews need to open the door to say that we have a place at the table. That is what we are waiting for.”

More information about the 9th of Av event can be found on the website.