Silver is Mine and gold is Mine—says the lord of Hosts. 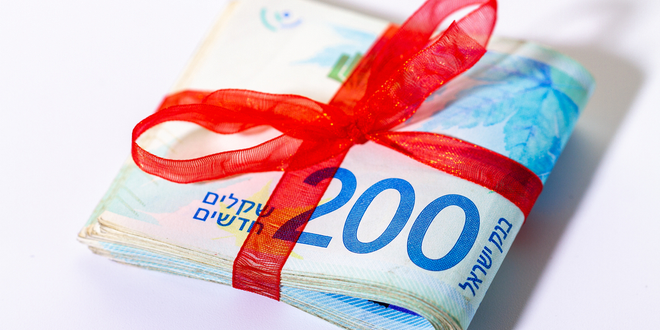 A new Israeli law will go into effect on Monday prohibiting cash payments of over $1,760 (6,000 New Israeli Shekel NIS) in cash or bank checks for transactions between a person and a business. The ceiling for transfers between private individuals will be $4,400 (NIS 15,000) instead of the current amount, almost $14,700.

Since January 2019, Israeli businesses and consumers have been subject to limits on cash payments under the Law for the Reduction in the Use of Cash. Previously, the use of cash up to $3,200 could be used in business deals. The ceiling for car transfers will remain the same at nearly $14,700.

The reason behind the new law was explained by Tamar Bracha, who is in charge of executing the law on behalf of Israel’s Tax Authority, to The Media Line.

“We want the public to reduce the use of cash money,” Bracha said. “The goal is to reduce cash fluidity in the market, mainly because crime organizations tend to rely on cash. By limiting the use of it, criminal activity is much harder to carry out.”

According to Globes, there will be a grace period of two years before the Tax Authority starts imposing fines on those who engage in cash deals of up to almost $2,500.

Transactions with charitable institutions and trade with Palestinians from Judea and Samaria who are not Israeli citizens are exempt from the new law, but a detailed report to Israel’s Tax Authority will be required.

Free-loan societies (gemachim), widely used in the Haredi community, will be exempt from the law in keeping with the demand of ultra-Orthodox lawmakers.

It is expected that in the future, laws will be passed prohibiting the stockpiling of more than NIS 200,000 shekels (USD 58,660) in cash at private residences.

In June, the Bank of Israel announced that it would test the feasibility of a retail central bank digital currency (CBDC) later this year, with results expected by the end of 2022. A CBDC, like other digital payments, would be easy to trace and monitor.

One of the obvious downsides is the new regulations make it difficult or impossible for people without bank accounts to handle their finances, effectively criminalizing most financial activities. At the time the legislation kicked in, there were over a million citizens without bank accounts in Israel.

The law has also been criticized for being racist, creating a loophole for Palestinians.

These laws restricting the use of cash are being passed in many countries and are expected to become more common in the future.

Israel is tightening their ban on using physical cash above certain thresholds, including between private citizens.

I think this trend will probably continue in other countries over time. https://t.co/8WcmHmfshL pic.twitter.com/k3WQj4jAnb

Lark Davis, a crypto influencer with one million followers on Twitter, made this prediction on Saturday.

From Monday, Israel will ban cash payments over $4,400! That means you cannot pay cash for a used car, designer bag, or any other higher ticket item.

Not the first or last country to introduce such restrictions.

According to media reports, the Israeli government is in the process of creating a regulatory framework around digital assets.

Rafi Farber, an Israeli economist and financial journalist who blogs and videos under the pen name The End Game Investor, combines Torah knowledge with financial wisdom. He was critical of the new measures.

“In a cashless system, inflation is more extreme and faster. It means that the government, or whoever has access, can track everything. Everything, even the smallest transactions, will get taxed. A teenage babysitter will have to pay taxes.”

“This is absolutely anti-Bible,” Farber added. “Jewish law goes into great detail about how to handle finances and transactions. Charging interest is a grave sin. If this facilitates interest, then it is expressly forbidden. The Temple was based around the silver half-shekel, which had to be a specific weight of actual silver.”

“According to Jewish law, money is silver,” Farber added. “But this isn’t about silver or money. The whole idea of centralized currency is geared towards control of all the money which is theft. And that is clearly forbidden. This is all geared towards tyranny which is the ultimate idolatry.”