MIT researchers propose ‘solution’ to climate change: Blocking the sun with shield the size of Brazil

And in that day —declares my God— I will make the sun set at noon, I will darken the earth on a sunny day. 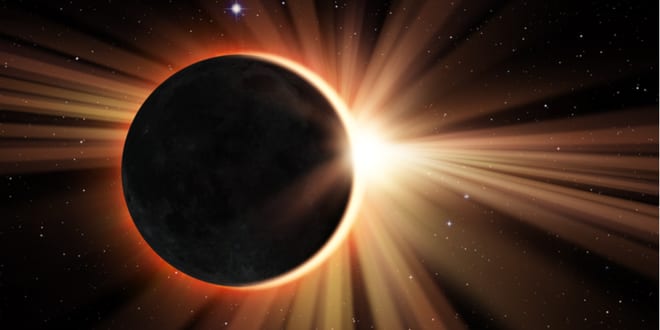 An interdisciplinary group of scientists at the Massachusetts Institute of Technology is exploring the possibility of using a space-based solar shield, dubbed the space bubble, to reduce the effect of incoming radiation on Earth’s surface to combat climate change. The idea, part of a solar-geoengineering approach,  was inspired by a concept initially proposed by astronomer Roger Angel. He first proposed a swarm of small spacecraft unfolding smaller shields using thin reflective films. Other ideas include creating a cloud of dust from asteroids, which poses the problem of keeping the material confined.

According to scientists, deflecting 1.8% of incident solar radiation before it hits the planet could fully reverse the current effects of global warming. To achieve this, scientists propose a craft the size of Brazil composed of frozen silicon bubbles. Being constructed in zero gravity would permit the bubble to be incredibly thin. The process is supposed to be easily deployable. The researchers claim the bubbles can be intentionally destroyed by breaking their surface equilibrium, making them fully reversible while significantly reducing space debris.

Researchers note that unanticipated negative consequences could arise. They also note that the shock of sudden termination of the geoengineering program could also have negative effects, so they recommend dismantling the bubble gradually. Studies identify the needed lifetime in a range from 50 to 200 years.

Implementation could happen before the end of the century, when the most severe consequences of climate change are currently predicted. In terms of cost, an initial estimate was suggested as approximately 0.5% of global GDP over 50 years.

The space bubbles could be manufactured directly in outer space, forming an extensive deflective raft positioned at the Lagrangian Point, a location between the Earth and the sun where the gravitational influence of both the sun and the Earth cancel out. The bubbles would be positioned to balance Earth gravitation, Sun gravitation, and solar pressure. The researchers note that space bubbles are preferable to other geoengineering concepts that are based on introducing gases or other materials into the atmosphere since the bubbles are non-intrusive and do not interfere directly with the biosphere and would therefore pose fewer risks to altering fragile ecosystems.

For now, the project is a working hypothesis, but the interdisciplinary team hopes to secure support for a feasibility study that would involve further lab experimentation and analyses.

The research team is also investigating the public policy questions, including whether geoengineering presents a “moral hazard” by undermining support for climate mitigation policies and encouraging people to see the shift away from fossil fuels as less important.

Other geoengineering proposals include sucking carbon dioxide from the air, pumping gas into the stratosphere to reflect some of the sun’s heat, brightening marine clouds to make them more reflective, and modifying the earth’s albedo with white roofs or reflective coverings for deserts.

Another geoengineering project,  funded by multi-billionaire Bill Gates and called the Stratospheric Controlled Perturbation Experiment (SCoPEx). The final plan involves more than 800 special aircraft carrying millions of tons of calcium carbonate (a compound used commonly in cement and medicinally as an antacid) into the stratosphere. The idea is to mimic the effects of massive volcanic eruptions, which have lowered global temperatures in a phenomenon known as volcanic winter. A test of the system that was scheduled last year was canceled.

Yuval Ovadia, whose videos on Nibiru have garnered hundreds of thousands of views, is skeptical of scientists using geoengineering to save the world.

Ovadia compared geoengineering to the Tower of Babel.

“They think they can control men and god, heavens and the earth,” Ovadia noted. “Men in that age were on a very high spiritual level. They knew much more practical Kabbalah and could manipulate nature by using Lashon hakodesh (holy language). What they could do in the era before the Tower of Babel made today’s science look silly. That is how they were able to build a tower to heaven, something modern technology still cannot accomplish. So God came down and messed up their language so they could no longer manipulate nature.”

“Great deeds are not forbidden, but they require a purity of purpose, an attachment to the Divine,” Ovadia said. “This is a way in which those who only seem good but are actually not are weeded out. Who took part in the Tower of Babel? The very wealthy and the engineers, just like this new project to block out heaven.”

Ovadia noted that this very scenario was described by the autistic children in Jerusalem, who are frequently consulted by rabbis for their prophetic ability.

“The children said that scientists act as if they are God as if they are in charge of the world and its destiny,” Ovadia said. “This is precisely what God hates the most. So he turns their own efforts against them.”