The makers of idols All work to no purpose; And the things they treasure Can do no good, As they themselves can testify. They neither look nor think, And so they shall be shamed. 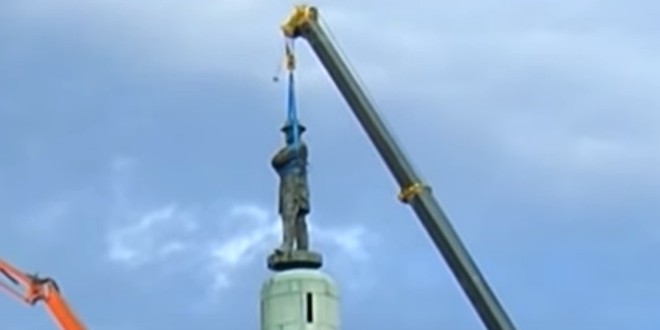 George Soros has invested $32 billion via his Open Society Foundation in extreme left-wing political initiatives, but it is now clear that he is branching out into the arts. One project has brought a pagan African voodoo goddess to the center of New Orleans.

The statue, created by noted American sculptor Alexander Doyle, was installed in 1884.  The monument was listed on the National Register of Historic Places in 1991. It was included by New Orleans magazine in June 2011 as one of the city’s “11 important statues”.

The historic statue was replaced with a modern sculpture by Simone Leigh called “Sentinel.” The sculpture depicts a snake wrapped around the slender, spoon-like body of a female. The woman is a stylized depiction of the water deity Mami Wata, while the spoon is a symbol of status in Zulu culture.

In a statement, Naima J.  Keith and Diana Nawi, artistic directors of the 2021 New Orleans triennial, wrote: “Ultimately, Simone felt, and we agreed, that because the original placement of the Robert E. Lee atop the pedestal was one of power and domination—the statue loomed over the city, symbolizing the tyranny of white supremacy—that her work should be closer to the level of the individual.”

Mami Wata, also known as Mammy Water or La Sirene, is a water spirit venerated in Africa and the African diaspora in the Americas. Mami Wata spirits are usually female but are sometimes male. Mami Wata is frequently depicted with a snake wrapped around her waist.

According to the pagan beliefs associated with the idol, she demands sexual fidelity from her followers while representing sexuality and promiscuity. Her followers claim that she wants her followers to be healthy and well off, while at the same time, they blame the spirit for misfortune such as treacherous ocean currents or illness. While believed to be infertile, barren mothers often call upon the spirit to cure their affliction.

The pagan goddess was featured in the 2019 novel, The Water Dancer by Ta-Nehisi Coates.

The location was also renamed Egalité Circle. The statue was placed at the site in January and is set to be removed this month as other works of art will be put on display. The site is the focus of a project featuring seven artists whose works will be put on display.to commemorate new Orleans’ triennial. The displays were supported by a $2 million grant  Mellon Foundation grant.

An additional $500,000 will come from the Open Society Foundations, George Soros’s philanthropic organization that funds projects related to “human rights” that was established in 2019. The Open Society Foundation is an international grantmaking network founded by billionaire business magnate George Soros, with branches in 37 countries ported with expenditures in excess of $11 billion since its establishment in 1993.

Soros donated over $1 million to Obama’s 2012 presidential campaign and over $8 million to Democratic campaigns during Hillary Clinton’s unsuccessful bid for the White House. In 2020, Soros was one of Joe Biden’s largest contributors, donating at least $500,000 to his campaign.

These efforts are not universally supported, and in September 2017, a petition to have him branded a “domestic terrorist” garnered over 100,000 signatures in two weeks.

If the billionaire is a country, it has a vibrant foreign policy. Soros influenced the collapse of communism in Eastern Europe in the late 1980s and early 1990s. But this influence is sometimes unwelcome.  Soros-backed pro-democracy initiatives have been banned in Kazakhstan and Turkmenistan. Due to his political activities,  Russia passed a special law prohibiting NGOs from taking money from foreigners. In 1997, Soros closed his foundation in Belarus after it was fined $3 million by the government for “tax and currency violations.”Since 2012, the Hungarian government has labeled George Soros as an enemy of the state due to his political involvement in the European refugee crisis. Soros is known as “The Man Who Broke the Bank of England” because of his short sale of US$10 billion worth of pounds sterling, which made him a profit of $1 billion during the 1992 Black Wednesday UK currency crisis. In November 2018, Soros was accused by Turkish President Recep Tayyip Erdoğan of supporting and financing “terrorists” in the 2013 Gezi Park protests.

In March 2017, six US senators sent a letter to then-Secretary of State Rex Tillerson asking that he look into several grants the State Department and the US Agency for International Development (USAID) have given to groups funded by “left-wing” Soros. According to the Heritage Foundation, the letter expressed specific concern about Soros’s influence on Macedonian politics, a concern which has also been expressed by members of the Macedonian government. Soros was accused of using his organization to destabilize the Macedonian government.