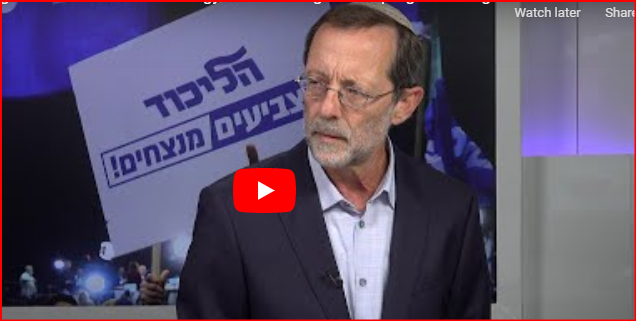 In the Israeli political arena, Moshe Feiglin, the leader of the libertarian Zionist party Zehut, is known as an intellectual ideologue who stands strong for his principles.

For this reason, he has met with limited success.  He was running in the Likud primaries. He represented Likud in the Knesset between 2013 and 2015, after which he left to form his own political party.  In July 2021, Feiglin returned to the Likud and is currently running in the party’s primaries.

In a recent interview with Israel National News, Feiglin emphasized the need to prioritize the identity of Israel as a Jewish state over its identity as a democracy.

“We saw that when the leadership of the Israeli state is being stolen from the Likud, from the Jewish majority, what we get instead is a ‘state of all its citizens,” “Feiglin explained, using the term as a pejorative. “That quickly becomes a state of all its Arabs. We tasted a bitter taste of what it means in the last year.”

Feiglin was referring to the addition of Mansour Abbas, the head of the Arab Ra’am party, to Prime Minister Naftali Bennett’s coalition. It marked the first time an Arab party had been part of the ruling coalition. Bennett’s right-wing base felt betrayed by the move, and the coalition was ineffective while making massive concessions to its Arab contingent.

“In the dark Oslo years, when we brought Arafat and the PLO to Israel, something sneaked inside from the back door, and we didn’t notice. They added the word ‘democratic’ to the name of the state. Why did they do this? Because through this definition they added to the definition of the state, they started to create a state of its citizens.”

Feiglin stated what seems to be his credo and call sign.

“Israel is a Jewish state,” he said unequivocally.

Feiglin clarified that the leftists were interested not in Israel being a democratic state but in importing radical leftist agendas from the US.

“These progressive agendas, we are seeing them in Israel in so many aspects,” he said. “Without anyone understanding what was going on, it took over the Israeli agenda, in the educational system, in the army, and of course in the justice system and of course in the media. Slowly but surely, they manipulated the Jewish state. The Jewish identity is the whole reason why the state was created in 1948. Not one Palmachnik [original Israeli settlers] gave his life, screaming, ‘I am giving my life for the democratic state.’

Feiglin noted that during the 2,000-year exile, when Jews expressed their longing for their homeland, it was for a Jewish state and not a democratic one.

“Of course, Israel is a democracy, and that is how we should function,” he said. “But the basic ethos that the state was created for was only one; that the Jewish nation came back to its homeland and created a Jewish state.”

“We should stop being afraid to say that,” Feiglin stated, noting that it is for this reason he has chosen to run on the Likud list.