Riding the Bus While Jewish

Home » Riding the Bus While Jewish 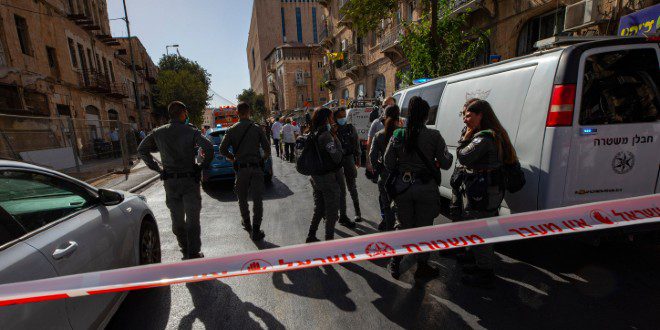 Another day, another stabbing.

Doesn’t it seem like that has become the standard news from Israel? It’s all too easy to fall into the trap of getting used to recurring violence and treating it as something routine, starting to think “That’s just how it is,” and then turning the page or changing the channel.

But this week’s stabbing in Jerusalem, like every terrorist attack, had unique elements and lessons that deserve a closer look.

Let’s start with the site of the attack. It was on a civilian bus, making its ordinary stops along the streets of Israel’s capital city. As it reached one of them, a Palestinian Arab man suddenly stabbed a Jewish passenger.

Pause right there. Mideast “experts” and J Street types are always claiming that Jews provoke Arab violence. How, exactly, did this bus passenger provoke the stabber?

The victim was not establishing a settlement. He wasn’t “occupying anybody.” He wasn’t “obstructing peace.”

Civil-rights activists in the United States have coined the term “driving while black” to describe unjust arrests of African-American motorists. I guess the victim on the Jerusalem bus didn’t realize that to some Palestinian Arabs, it’s a crime to ride a bus while Jewish.

The Jerusalem Post and other Israeli media agencies published a photograph of the blood-stained weapon lying on the ground after the attack. It was a screwdriver.

A screwdriver is not nearly as sharp as a knife. In order to stab somebody, the attacker would have had to use much more force than if he had used a sharp blade. And, of course, in order to carry out any kind of stabbing attack, the terrorist has to be within inches of his victims.

I’m pointing this out because it’s important to recognize something about the psychology of stabbers. A Palestinian Arab terrorist who plants a bomb in a movie theater never sees his victims at all. A terrorist who shoots people with a rifle or machine gun doesn’t have to look into the eyes of the people he is trying to murder. But this screwdriver terrorist had to be right up against the person he was stabbing.

To commit such brutal violence, a terrorist has to possess a profoundly cruel and barbaric mentality. It’s not that terrorists who use bombs or machine guns are any less barbaric. But there’s something about such an up-close act of violence that illustrates an attacker’s viciousness in a way that more “anonymous” types of murder can disguise.

Now let’s consider the broader implications of the attack. If a Palestinian Arab state was established next to Israel—as the U.S. State Department and the United Nations are constantly demanding—this is what Israelis would face: an entire sovereign country representing the mentality of the screwdriver terrorist.

How do we know that a state of “Palestine” would act in the spirit of such stabbers? Because the Palestinian Authority regime itself constantly says so. The official P.A. news media relentlessly praises stabbers and holds them up to Palestinian society as heroes and heroines.

Since the stabber was shot dead by an armed bystander, his family will receive a lifetime of monetary payments from the P.A. If the stabber had survived, then he would have been paid a salary by the P.A., as it pays all imprisoned terrorists. The P.A.’s policy of paying terrorists is a statement about the values that Palestinian Arab society holds dear and that a state of “Palestine” would embody.

It’s been said before, but it has to be said again. If the attacker had been a Jew and the victim had been an Arab, the assault would be on the front pages of newspapers around the world. Americans for Peace Now and B’Tselem would be shouting about “settler violence.” (Of course, the bus was driving through Ramot, a part of northern Jerusalem that is beyond the 1967 lines, so the critics would have called it a “settler bus.”) The Biden administration would express “concern” about “the escalating violence.”

But since the attacker was a Palestinian Arab and his victim was a Jew, the international community is silent. And that silence speaks volumes.