For I Hashem am your God, Who grasped your right hand, Who say to you: Have no fear; I will be your help. 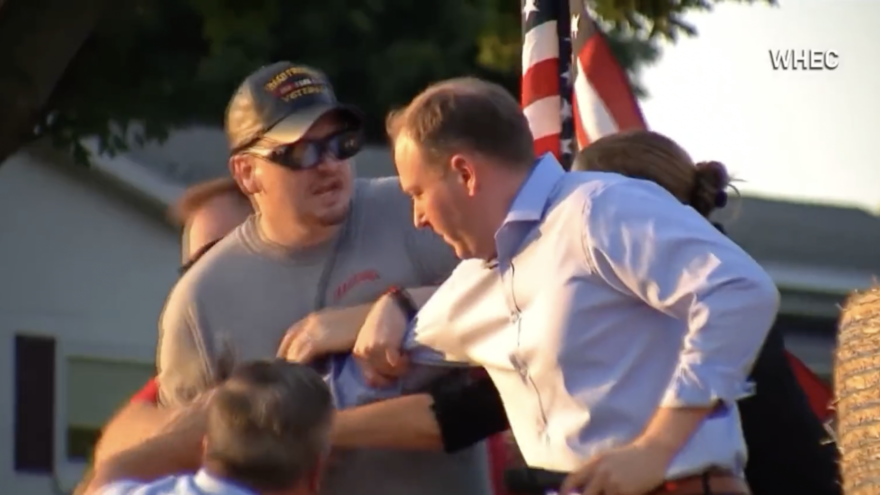 Zeldin was campaigning in Perinton, New York, outside of Rochester, where he was making a public speech at a V.F.W. post. According to a video of the incident, a white male wearing a baseball cap, a gray T-shirt and dark shorts, climbed onto the flatbed trailer on which Zeldin was speaking and pointed the weapon at his neck.

The assailant can be heard telling Zeldin, “you’re done,” multiple times. Zeldin grabbed the attacker’s wrist before AMVETS national director Joe Chenelly intervened, according to Fox News, and pulled the man to the ground along with Zeldin. Several other attendees and security also assisted Zeldin.

Zeldin was not injured and finished his speech after coming back on stage.

In a series of tweets after the incident, Zeldin thanked those who expressed concern and law enforcement.

“I’m ok, and [candidate for lieutenant governor Alison Esposito], and all other attendees are safe. The attacker is in custody,” Zeldin tweeted. “Grateful for the attendees who stepped up quickly to assist and the law enforcement officers who quickly responded. I’m as resolute as ever to do my part to make NY safe again.”

“Thank you to everyone who reached out following tonight’s attack in Fairport,” he said. “Someone tried to stab me on stage during this evening’s rally, but fortunately, I was able to grab his wrist and stop him for a few moments until others tackled him.”

Police arrested the attacker and according to 13 ABC News, the Monroe County Sheriff’s Office’s Major Crimes Unit is investigating the incident. At press time, law enforcement agencies have not released the attacker’s identity or his motivation.

According to the New York Times, the stop was part of a general election campaign kickoff bus tour across the state called “Unite to Fire Hochul,” in which reeling in crime is a key campaign issue for Zeldin.

“My team has informed me about the incident at Lee Zeldin’s campaign event tonight. Relieved to hear that Congressman Zeldin was not injured and that the suspect is in custody,” Hochul tweeted. “I condemn this violent behavior in the strongest terms possible—it has no place in New York.”