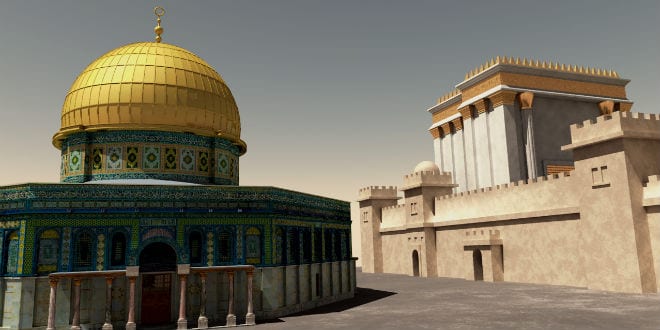 President Joe Biden’s recent visit to Israel and Saudi Arabia resulted in the major announcement of a strange symbolic step towards normalization between the regional superpowers: direct flights between the two countries for Muslim pilgrims. “I want to see the day when I can depart from Ben-Gurion to Jeddah to fulfill my religious obligation” of pilgrimage to Mecca, said Israel’s Regional Cooperation Minister, Esawi Frej.

Unlike economic steps towards mutual prosperity that highlighted normalization with the UAE, how do flights to the Hajj bring Israelis and Saudis closer together or advance peace?

In fact, direct flights for Muslim pilgrims and the implicit recognition of Saudi Arabia as the official location of Islamic worship could be the most meaningful step toward regional and world peace. Such recognition will lead Muslims and others to recognize the Temple Mount as Judaism’s holiest site and set the stage for the rebuilding of the Third Temple.

To be sure, the rebuilding of the Beit Hamikdash, destroyed nearly two thousand years ago by the ancient Romans, as a step towards peace seems counterintuitive.

It is said that, “Jerusalem binds people together” (Psalms 122:3) and nothing seems to unite Jews, Muslims, and even Christians, then the nearly universal opposition to the building of the Third Temple in the contested city.

Long ago, after Jesus famously overturned the Temple’s money tables, Christianity essentially wrote the Temple out of their theology. Even today, some of the most pro-Israel Christians still see the Temple as a relic relegated to ancient history. At the Christians United for Israel summit taking place in Washington this week, you will not hear any calls for the rebuilding of the Temple from the thousands of enthusiastic Evangelicals.

Muslims are, for the most part, united in their opposition to any Jewish claims to the Temple Mount. Since the Six Day War in 1967, the Palestinians have used any pretense of Jewish presence anywhere near the Temple Mount as a sign of “Judaizing” and have instigated countless riots, protests, and attacks as a result.

Strangely and sadly enough, it’s not just Muslims and Christians, but many Jews are also united in their opposition to the rebuilding of the Beit Hamidash.

One of the first decisions early Reformers made in updating Judaism for the modern age was removing all references to the ancient Temple from their services 150 years ago. They not only changed the prayers, but the Reformers also rebranded their houses of worship from ‘synagogues’ to ‘temples.’ “Berlin is our Jerusalem” they cried, insisting that they had no religious aspirations to return to Israel, certainly not to worship in a cultic Temple.

Ultra-Orthodoxy too, for the most part, over the past century has highlighted minority opinions that the Third Temple would literally fall from the sky. Accordingly, they have insisted that there is no place for a man-made Beit Hamikdash in our earthly realm, until the Messiah arrives, riding upon a donkey. This is why, with all their genuine religious fervor, Ultra-Orthodox Jews prefer to pray at the Western Wall, then to ascend the Temple Mount.

Jerusalem sure has a strange way of uniting people together!

Nevertheless, despite the abundance of opposition, the rebuilding of the Temple is absolutely vital for the sake of peace, and therefore it is imperative that we explore ways to build it.

With so much violent instability in the world today, we must pursue peace in this Middle East aggressively. As I’ve argued before, Palestinian activists are desecrating the Temple Mount and holding the region hostage by fear-mongering in the Arab world, spreading lies that Israel wants to destroy Al Aqsa. Under the failed custodianship of the Waqf, Jordan benefits from the instability and violence on the mountain by maintaining the false narrative that the absence of a Jewish presence is necessary to uphold order.

Therefore, in the spirit of the Abraham Accords, as articulated powerfully in Aryeh Lightstone’s new book “Let My People Know,” a radically new strength-based approach must take hold.

Normalization with Saudi Arabia elevates the royal kingdom as a true partner for peace as the official representative of Islam, the home of Mecca and Medina. Direct flights between the two countries could take place daily, with extra flights on Fridays and during Ramadan, on a low-cost carrier like the shuttles that commuters take to fly from Washington DC to New York City. These direct flights would enable Palestinians to embrace their Islamic heritage with easy trips from Ramallah to Jedda for a few hundred shekels!

With Palestinians given easy access to the Great Mosque of Mecca, Israel could assume sovereignty over Har Habyit. The Jewish State would continue to respect the sanctity of Al Aqsa and the Dome of the Rock by building a Jewish Temple on the Mount without damaging these two holy sites. Many peaceful and practical plans could accommodate this seemingly complex terrain.

However, to move this ambitious plan forward, the Jewish community must first normalize the Third Temple for today’s day and age.

As the Hebrew prophets said repeatedly, the purpose of the Temple is not about animal sacrifice, it’s about humbling ourselves before the Almighty. “For I desire mercy, not sacrifice; obedience to the Lord, rather than burnt offerings.” (Hoshea 6:6)

Western Civilization today is at a crossroads.

Terrifyingly, we are veering once again towards global nuclear conflict, with no solution in sight. Alarmingly, we are witnessing the cracks spread throughout the seemingly impenetrable world order maintained by liberal democracies. Insanely, we are participating in the polarizing cultural battles that are tearing apart our fragile communities.

Yet, we must not despair because the Beit Hamikdash could be that most unlikely of solutions that reminds us all, Christians, Jews, and Muslims of our own human limitations, making room for our Heavenly Father. The Third Temple must be that unifying force for all of humanity, that shows respect to all faiths in a manner the world doesn’t yet recognize, a true “house of prayer for all nations” as relevant today as it was when King Solomon built the first one 3,000 years ago.

This will not happen if we continue to deny what is obvious, if we allow the canceling of our history, or if we give in to weakness. True transformation will only occur when we turn in reverence to the Book of Books, recognized by hundreds of millions of people around the world today, as it has for thousands of years.

The Bible calls upon the People of Israel to return to the Land of Israel, where we will assume our historic destiny to be a “light unto the nations.” By taking on that role and transforming the State of Israel into the world’s spiritual superpower, with a Jewish Temple rebuilt in the heart of Jerusalem, we will revitalize the spirit of Judaism and inspire Christians and Muslims as well.

If just enough secular and religious Israelis get behind the construction of a Temple in Jerusalem – a vision articulated by Theodore Herzl more than 125 years ago – rest assured that those currently vying for the Prime Minister’s office and seeking to assemble a broad coalition, will find peaceful ways to make it happen.

Previous religious and political leaders have not articulated a compelling vision for the future of the Jewish State, and as we begin the three-week mourning period for the Beit Hamikdash, we can only pray that the next generation will.

Normalization with Saudi Arabia has presented us with exciting new opportunities to reimagine the role the Jewish people are meant to play in the third millennium, by transforming Jerusalem into the holy city it is destined to be.