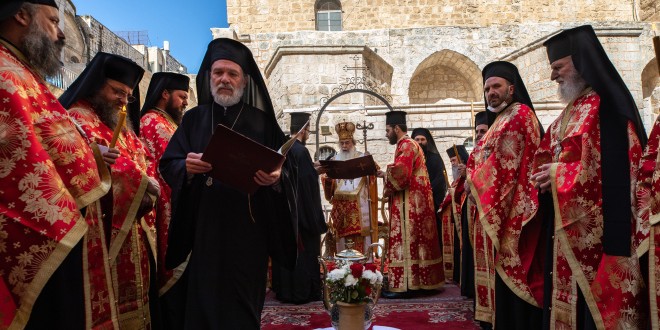 US President Joe Biden meeting with the Greek Orthodox Patriarch of Jerusalem, Theophilos III, at the Church of the Nativity in Bethlehem, Palestine. pic.twitter.com/wcvc3ad1ER

In a letter reportedly written to Biden, the Patriarch wrote: “The main way to the Church of the Holy Sepulchre is under serious threat from extremist Jewish forces who have targeted the Christian quarter with the goal of altering the historic, demographic and geographic nature and validity of the site and terminate the Christian presence in the city.”

According to the report, the letter continues: “It is saddening that these groups are supported, in part, by right-wing figures in Israel’s political sphere. They are, together, trying to disrupt the longtime status quo in the city.”

This accusation echo claims the Patriarch made last Christmas.

“Our presence in Jerusalem is under threat,” he wrote at the time in a Times of London column. “Our churches are threatened by Israeli radical fringe groups. At the hands of these Zionist extremists, the Christian community in Jerusalem is suffering greatly,” he said. “Our brothers and sisters are the victims of hate crimes. Our churches are regularly desecrated and vandalized. Our clergy are subject to frequent intimidation.”

These claims are clearly counterfactual, as according to Israel’s Central Bureau of Statistics, the country’s Christian population actually increased last year by 1.4 percent. Indeed, Israel is the only place in the Middle East where Christians are flourishing.

As Honest Reporting points out, the Christian charity Open Doors explicitly attributed the steep decline of Christians in the area to “Islamic oppression,” explaining that “Islamic extremist militants” in the Palestinian Authority-administered “West Bank” were causing Christians to fear violent attacks.

In fact, the two-state solution, which would create a Palestinian state inside Israel’s borders, is a massive threat to the Christians of Israel. In 2005, when Israel unilaterally withdrew from Gaza, there were approximately 5,000 Christians living there. After Hamas seized control, its affiliates began targeting Christians with kidnappings, murders, forced conversions, and attacks on churches and Christian-owned businesses. Now, fewer than one thousand Christians remain in Gaza.

It should be emphasized that Jews are prohibited from living in or even entering these areas, so the decrease in the Christian population cannot be blamed on “settler communities.”

It should be noted that Greek Orthodox Church is involved in ongoing court battles surrounding properties they own or sold in Jerusalem.