17th of Tammuz: Record number of Jews ascend to the Temple Mount to commemorate Jerusalem’s destruction

Thus said the lord of Hosts: Take courage, you who now hear these words which the Neviim spoke when the foundations were laid for the rebuilding of the Temple, the House of the lord of Hosts. 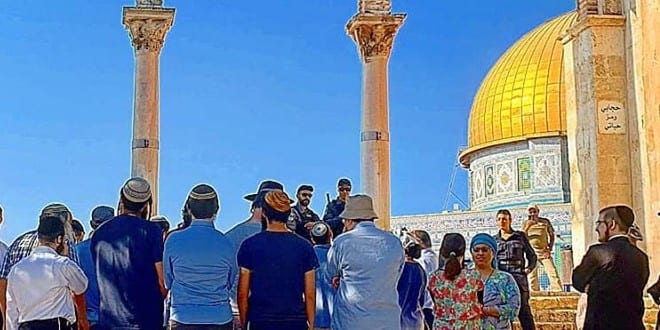 On Sunday,  Jews ascended to the Temple Mount, fasting to commemorate the breach of the walls of Jerusalem that led to the destruction of the Second Temple.

Saturday was the Seventeenth of Tammuz, but if it falls on Saturday (as it did this year), the fast is postponed until the following day.

Ascending to Judaism’s holiest site is a powerful rite for Jews, requiring immersion in a mikveh (ritual bath), and wearing leather shoes is forbidden. Despite Israeli law mandating religious equality at the site, The Israeli police routinely prohibit Jews (and Christians) from praying. Jews may only enter from one gate during limited hours and only after a rigorous background and security check.

“This is a 50% increase from this day last year,” Elboim said. “Everything went very well. Jews succeeded in praying and even in performing the Kohanic priestly blessing.”

Quds News Network posted a video that was masked by Twitter as containing “potentially sensitive content.” This mask is usually used to prevent viewers from seeing violence or other disturbing images. In this case, the “sensitive content” was a video of Jews standing silently in prayer.

“Scores of Israeli settlers entered the holy site in groups and performed rituals and Talmudic prayers there under the protection of Israeli police officers,” WAFA wrote. Other Arab sites described the rituals as “racist” in nature.

In memory of the destruction of the Temple, Gal Nina Armon posted a video from two years ago showing how Judaism’s holiest site was transformed into a waterpark as dozens of Arab children arrived with water guns.

Temple Mount activist Tom Nisani from Beyadenu noted sadly that this type of desecration is commonplace, taking place on a daily basis, as his Twitter feed can attest. Soccer games and water fights are common but so are contests that have men riding plastic crates down the slick stone ramps of the Temple Mount Compound. In one bizarre video, masked Arab men can be seen dancing and playing while they organize an assault on Israeli police on the Temple Mount.

Learning how to be a good Terrorist pic.twitter.com/DjTVqnCAfT

“They play there, which is painful enough, but then they immediately turn their places of prayer into staging grounds for conflict,” Nisani said. “I can’t think of any other religion that treats its holy sites in such a manner. Certainly, Judaism does not. They hate us for treating the holiness of the site with respect.”

It is sadly ironic that Nisani is currently prohibited by the police from entering the Temple Mount. His crime? Collecting garbage, the Arabs had intentionally scattered at the site.