Fighting Back by Planting Trees and Staying True to the Bible 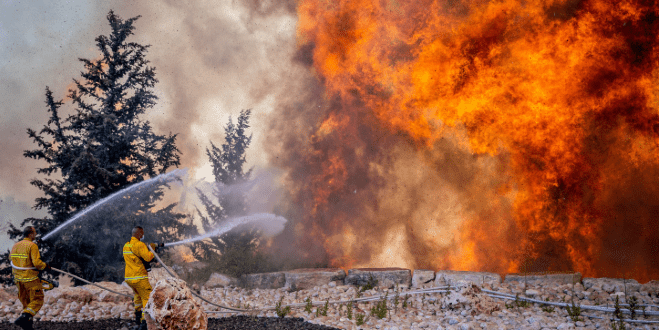 In recent years, Arab terrorists have discovered a new way to inflict pain upon the Jewish state: starting disastrous forest fires. Every year, when the dry season kicks in, Arab terrorists ignite tens of forest fires with the goal of inflicting as much damage as possible upon Israel’s natural environment. These devastating arson attacks have left some of the most fertile areas of the Promised Land completely scorched to ashes. In one attack in 2019, Arab arsonists destroyed  794 hectares of land, displacing the entire community of nearly 60 families in the town of Moshav Modi’in. The catastrophic blaze destroyed over two-thirds of its houses, melting power lines and water pipes and scorching the gardens they had planted with their own hands for over 40 years.

Last summer, on August 3, 2021, arsonists targeted the Shoresh forest, located in the hills just outside of Jerusalem, burning down 3,200 trees. Thankfully, the local residents are resilient and have mobilized to replant the forest anew. Israel365, an organization supporting many important causes in Israel, is currently working together with the Shoresh community to raise the necessary funds to replant the forest.

Replanting, however, is particularly complicated this year. According to the Jewish calendar, this year is a “Shemitah year,” a Sabbatical year, when the Bible states that farming in the land of Israel must come to a screeching halt, to allow the land to ‘rest’:

“But in the seventh year, the land shall have a Shabbat of complete rest, a Shabbat of Hashem (God): you shall not sow your field or prune your vineyard.” (Leviticus 25:4)

Over the course of this Sabbatical year, Israel365 has supported Israeli farmers to help them fulfill the Bible’s command.

Although Shoresh residents do not consider themselves religious, they have agreed to wait until the Sabbatical year is over before replanting the trees. Thankful for the support of Israel365, they have decided to give God’s word a chance.

With the Sabbatical year drawing to a close, Israel365 would like to show the people of Shoresh that God does not abandon those who adhere to his commandments. The organization is raising funds to replant the Shoresh forest with 1,200 trees as soon as the Sabbatical year ends this Fall.

With the goal of preventing future forest fires, Israel365 is utilizing a new method of planting a forest called ‘thinning.’ By reducing the number of trees in the forest, “thinning” restores more natural forest structures by reducing tree density and creating natural gaps in canopies. The reduction in the number of trees also reduces pressure in forested areas that are susceptible to disease.

Israel365’s donor relations chief Yisrael Glass said: “With the help of our generous donors, not only were we able to commit to planting thousands of trees in Israel, we were able to help an entire community observe the special commandment of the Sabbatical year, allowing the land to rest. These trees that we plant in Israel are not a short-term investment, and they give the Jewish people a stronger hold on the land. We will, God willing, continue to give more and more and plant many more trees in Israel while we keep the word of God.”

To help Israel365 Replant the Shoresh Forest, click on the image below.