A prince who lacks understanding is very oppressive; 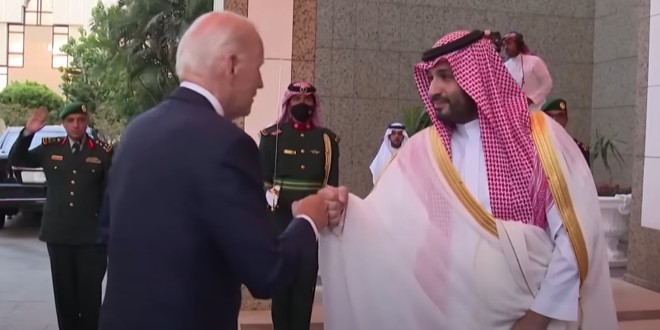 After snubbing Israel for two days in favor of paying homage to the Palestinian Authority, President Biden left the Holy Land for Saudi Arabia on Friday, where the tables were turned, and the Saudis snubbed the President of the United States.

Before traveling to Israel, Biden’s office informed Israel that the standard ceremony at Ben Gurion International Airport honoring visiting dignitaries would be curtailed. Handshakes were also going to be proscribed due to COVID concerns, and pundits conjectured that the ‘shake-less’ Israel visit was in preparation for a Presidential snub of the Saudis who had fallen in disfavor due to the murder of Saudi journalist Jamal Ahmad Khashoggi in 2018. Biden refused to call Crown Prince Mohammed bin Salman for several weeks after he took office as per his campaign promise to turn the Saudi allies into a “pariah.” But a trip to Saudi Arabia was scheduled after a visit to Israel.  This change of heart was due to the record high gasoline cost at the US pumps. Biden had already called the Saudis to increase oil production, but they had not returned his call. Just a few weeks before his first trip to the region, Biden announced that he would not meet with Crown Prince Mohammed bin Salman on his visit to Saudi Arabia. The president was going to meet with the Saudi prince, but there would be no handshake.

A shadow was cast over the meeting from the outset when the Saudis set the venue in Jeddah and not in the capital Riyadh. In stark contrast to his visit to Israel, Saudi media downplayed the presidential visit, presenting it as a minor aspect of the GCC+3 summit for regional leaders.

In this context, the intended message of the informal fist bump was lost.

“The fist bump between President Biden and Mohammed bin Salman was worse than a handshake,” Fred Ryan, the publisher and CEO of the Washington Post told the BBC. “It was shameful. It projected a level of intimacy and comfort that delivers to MBS the unwarranted redemption he has been desperately seeking.”

In what was clearly an attempt at saving face, Biden raised the issue of Kashoggi at his first meeting with Prince Salman. The prince responded with a challenge, raising several humanitarian questions. He asked why the US was not pursuing justice in the killing of Palestinian-American journalist Shireen Abu Akleh. The prince also emphasized the torture of prisoners by US troops in Iraq’s Abu Ghraib prison.

The main mission of the meeting seemed to have failed as the Prince reportedly informed the president that his country was already producing oil at maximum capacity but may be able to increase from 12 million barrels per day to 13 million by 2027. In a speech attended by Biden, the prince added that Biden’s agenda to entirely eliminate the use of fossil fuels in favor of renewable energy was destructive and counterproductive.

“Adopting unrealistic policies to reduce emissions by excluding main energy sources will lead in coming years to unprecedented inflation and an increase in energy prices, rising unemployment, and a worsening of serious social and security problems,” Prince Salman said.

The summit held in Jeddah was also attended by leaders from six Gulf Arab states and Egypt, Jordan, and Iraq.

The diplomatic rift between the Biden administration and the Saudis was emphasized after the kingdom recently announced its decision to open its airspace for all civilian overflights from Israel. At a press conference with Crown Prince Salman on Friday night, Biden presented this as a personal success, being “a big deal, not only symbolically but substantively.

“This is the first tangible step on the path of what I hope will eventually be a broader normalization of relations” between Israel and Saudi Arabia, Biden added.

Israel’s interim Prime Minister Yair Lapid parroted this sentiment, saying in an announcement on Friday night that he welcomed the move “opening Saudi airspace to Israeli airlines” as “the first official step in normalization with Saudi Arabia.”

“I thank the Saudi leadership for the opening of Saudi airspace. This is only the first step,” Lapid added.

But these claims were refuted the next day.

“No, this has nothing to do with diplomatic ties with Israel,” Saudi Foreign Minister Prince Faisal bin Farhan said in a press conference after the summit on Saturday. “The issue of overflights is a decision we took… in the interest [of] providing connectivity between countries in the world, and we hope that it will make some travelers’ lives easier. It’s not in any way a precursor to any further steps.”

In short, Biden could not grab credit for a peace deal as President Trump had rightfully done after negotiating the Abraham Accords.

The Saudi Foreign Minister added that his country’s “requirements for peace” with Israel are “a two-state settlement with a Palestinian state in the occupied territories with east Jerusalem as its capital.”

But even if an agreement is negotiated between Israel and the Palestinians, Biden has been pursuing several policies that are creating friction with the Saudis. Biden is working to reinstate the Obama-brokered Joint Comprehensive Plan of Action (JCPOA), the deal with Iran that gave them billions of dollars while paving the way for their nuclear program to produce weapons in the near future. Biden has also curtailed aid to Saudi’s military response to attacks from the Yemenite Houthis, an Iranian proxy.

Alienating Saudi Arabia has implications in the international arena. In a Washington Post op-ed published last week, Biden argued that improving US-Saudi relations was essential to position the U.S. “in the best possible position to outcompete China.”

In a sense, this competition was already lost well before this presidential visit to the Middle East. In 2016, China and Saudi Arabia signed a “strategic partnership” tied to “stable long-term energy cooperation,” which has resulted in bilateral trade that was valued at $65.2 billion in 2020.