New York Times slammed for being consistently biased against Israel

For the wicked and the deceitful open their mouth against me; they speak to me with lying tongue. 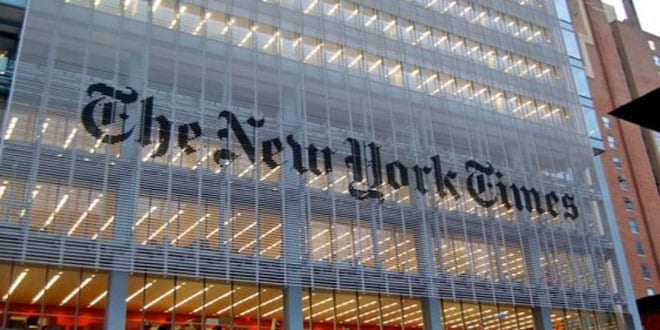 As the largest newspaper in the US city with the largest Jewish population, the New York Times should not have a problem with an antisemitic bias in its reporting. But multiple media sources, including two media watchdogs, have recently called the NYT out for its antisemitism. It should come as no surprise that despite claims that anti-Zionism is not antisemitism, in this case, it is.

In a recent exposé published by the Hebrew language Ma’ariv, journalist Lilac Sigan wrote about the NYT’s reporting on Israel in the first half of this year. Sigan concluded that the NYT “disproportionately focuses on Israel, is overly selective in which Israel-related stories it reports on, and fails to provide its readers with the proper context in its coverage of news surrounding Israel and the Palestinians.”

“After six months, it can already be determined with confidence that there is an excessive preoccupation with incidents in which Israel harms Palestinians,” Sigan wrote. “During the first half of 2022, Israel received 832 mentions in New York Times reports while other Middle Eastern nations received far less attention. Turkey was mentioned 619 times, Iran received 518 mentions, and Syria appeared 498 times.”

“Meanwhile, the US-designated Hamas and Hezbollah terrorist organizations were mentioned only 37 and 22 times respectively.”

“Not only does the New York Times seem to pay an inordinate amount of attention to Israel, but, from an examination of its Israel-related articles published in the first half of 2022, the publication seems to hold a predominantly negative view of the Jewish state.”

Of the 118 pieces written about Israel, 53% portrayed Israel in a negative light, 34% were neutral, and only 13% were positive.”

Honest Reporting, a media watchdog website, added to Sigan’s conclusions, citing the NYT’s reporting on the death of Al Jazeera reporter Shireen Abu Akleh who was killed in the crossfire of a firefight between IDF troops and terrorists in Jenin. Despite accusations that an IDF soldier fired the fatal bullet, this has remained unproven, most notably because the PA refuses to cooperate with any investigation. This has not prevented the NYT from blaming Israel.

“During the month-and-a-half between Abu Akleh’s death and the end of the period under analysis, The New York Times published 14 articles concerning the incident in question, including a thorough “investigation” that found Israel responsible for killing Abu Akleh,” Honest Reporting wrote. The reporting on Abu Akleh represented 13% of all stories about Israel in the newspaper during that period.

“It was unusual for the NYT to invest resources in such a report after CNN, the AP, and The Washington Post had all released similar findings,” Sigan wrote.

When commenting on the NYT coverage of Abu Akleh’s death, Sigan noted that “16 journalists have been killed so far in 2022 (including Abu Akleh), with the NYT reporting on seven of these deaths. However, of these seven journalist deaths, the Times has devoted 14 articles to the killing of Abu Akleh while writing a total of 13 pieces about all the other journalists combined.”

But do expect more anti-Israeli PR added to an already over-exhausted story. I can understand why the Palestinian Authority would be interested in extending this, but why would @nytimes ? Do these proportions make any sense to you? pic.twitter.com/mPLyJhVqob

Even more disturbing were the omissions of Israel-related stories. “

“There were 124 explicit threats against Israel, including rocket fire, aircraft infiltration, terrorist attacks and attempted terrorist attacks, violence, and vandalism carried out against Jewish holy sites,” Sigan wrote. “ The story about the Iranian cell that tried to kidnap and murder Israelis in Turkey, for example, was reduced to one trial in an article that dealt with the dismissal of the Iranian intelligence chief. The Hezbollah drones from Lebanon that were sent to attack the Israeli gas fields and shot down were not reported, as were all of Hezbollah’s threats in the matter.”

Sigan cited 24 incidents of Palestinian terrorism, incitement, and violence against Israelis and another 64 stories that dealt with the Palestinian Authority and Hamas’ corruption and cruelty towards Palestinians that all went unreported by the NYT. This included the arrest of 64journalists, the torture and murder of prisoners, and anti-American demonstrations. The NYT also did not report on the Palestinian Authority siding with Russia in its invasion of Ukraine, a story that indeed would have been immensely important to New York readers.

She also noted 122 mentions of “antisemitism” in the NYT during the first half of 2022, but not a single one dealt with Palestinian antisemitism.

Sigan also points out that, in contrast to the NYT’s negative portrayal of Israel, there were almost no negative articles about the Palestinians.

Sigan noted that when the newspaper had no choice but to report on Palestinian terrorism, it refused to describe the perpetrators as “terrorists,” referring to them as  “Arab assailants.”

Sigan also focused on the NYT’s use of historical context. Sigan pointed out that in the first six months of 2022, the terms “Israel” and “1967” and “Israel” and “occupation” appeared a total of 101 times, giving context to the articles. There were no mentions of the illegal Jordanian occupation preceding 1967 or the Arab aggression leading up to the Six-Day War and Israel’s conquering of the region.

Sigan’s conclusion is grim, claiming that the extreme bias of media like the NYT “encourages both sides to stay in conflict and fixation” while misinforming the public.

“An opinion must be formulated on the basis of complete information, otherwise, it does not express knowledge and reason; only propaganda,’ Sigan wrote. “When there is incomplete information, an opinion is not formed out of freedom. Any opinion is merely obsessive repetition and reflects inadequate education that the reader is not even aware of. Journalistic coverage driven only by an agenda does not educate the masses. It only produces ignorance, no matter which side of the political map it comes from.”