On that day, Hashem made a covenant with Avram, saying, “To your offspring I assign this land, from the river of Egypt to the great river, the river Euphrates: 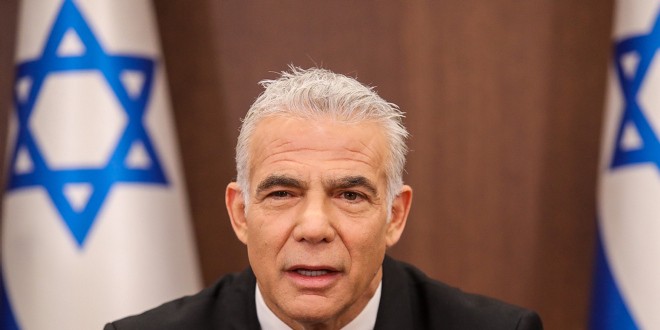 On Sunday night, Hadshot HaMeitav reported on the social media platform Telegram the newly appointed Israeli Prime Minister Yair Lapid has agreed to meetings to renew talks with the Palestinians to create a “two-state solution.” The report cited Kan 11 News reporter Roy Kase who cited a report published by the Egyptian Presidential Office quoting a phone conversation between Lapid and Egyptian President al-Sisi:

“It was agreed to work to organize bilateral and multilateral meetings that would include Israel, Egypt, and the head of the Palestinian Authority in the near future to re-energize the peace negotiations process,” the report read.

The Egyptian announcement stands in contrast to the benign statement by the Israeli government:

“The two leaders discussed bilateral and regional matters and emphasized the importance of the peace agreement between Egypt and Israel, which laid the foundation for the countries’ strategic relations and is a central pillar of regional stability,” the Israeli statement read. “The two expressed their commitment to continuing to develop relations, including in the economic sphere.”

“President El-Sisi reiterated that Egypt will continue its efforts to achieve just and comprehensive peace, based on the two-state solution and references of international legitimacy, opening up prospects for cooperation and development for all the peoples of the region.”

“It is no secret that I support a two-state solution. Unfortunately, there is no current plan for this. However, there is one thing we all need to remember. If there is eventually a Palestinian state, it must be a peace-loving democracy,” Lapid said at a meeting of the European Union Foreign Affairs Council, attended by 26 EU foreign ministers.

“We cannot be asked to participate in the building of another threat to our lives,” he said.

Lapid has opposed expanding or building Jewish communities “that will prevent the possibility of a future two-state solution.”

A two-state solution would create an unprecedented Palestinian state inside Israel’s borders that is ethnically cleansed of Jews, with its capital in Jerusalem. Even if the state is established with the Palestinian Authority in power, Hamas currently commands popular support and could take over as it did in Gaza.

The recent revelation comes on the eve of President Biden’s visit to the region. Biden’s administration had reestablished relations with the PA that were cut off under President Trump.

Yair Lapid, head of the Yesh Atid party, was appointed the interim Prime Minister less than one month after Naftali Bennett’s coalition dissolved and will remain in the post until elections in November. His social agenda is anti-Haredi and anti-religious as he pushed for increased public transportation on Shabbat and instituting a civil marriage track in Israel.

He criticized Netanyahu for alienating American Democrats and is suspicious of American evangelical support of Israel.

“The fact that the [Israeli] government completely identifies with the conservative, evangelical faction of the Republican party is dangerous,” he was quoted as saying.