Twitter-verse on fire over whether Anne Frank had “white privilege”

But Hashem said to Shmuel, “Pay no attention to his appearance or his stature, for I have rejected him. For not as man sees [does Hashem see]; man sees only what is visible, but Hashem sees into the heart.” 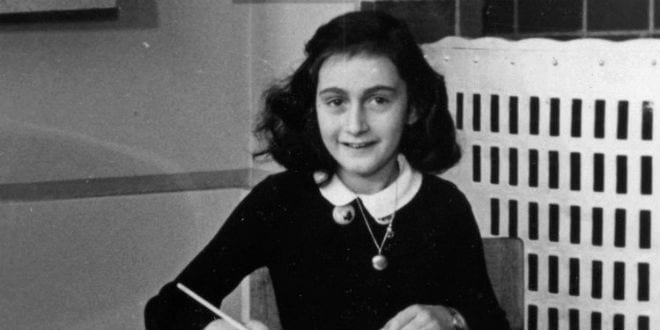 Seventy-seven years after she was murdered by the Nazis, Anne Frank is trending on Twitter for the most bizarre reason; an online debate is raging over whether the young Jewish girl was murdered despite having “white privilege.”

One tweet made the claim, “Yeah, Anne Frank had white privilege. Bad things happen to people with white privilege also, but don’t tell the whites that.”

Anne Frank was murdered for not being white

Six million Jews were murdered for not being white

Congressional candidate Irene Armendariz-Jackson (R-Texas) was even more critical, tweeting, “I cannot believe I log on to Twitter this morning and see Leftists unironically debating whether or not Anne Frank had white privilege. At what point do we just stop and realize they’ve lost their minds?”

TMZ covered the story, explaining the “twisted theory” behind the contention:

“Unclear how this toxic discourse first started, but it seems to stem from a warped notion that Jews had the benefit of their skin color to go unnoticed in public, if only temporarily, during that bleak time in history … while POC, historically, haven’t been able to do so.”

This bizarre concept that the Nazis were somehow challenged to discern who the Jews were and were forced to deliberate six million times about who went into the gas chamber is actually mainstream.

In February, Whoopi Goldberg, co-host of “The View,” caused general consternation on her show on Monday night when she dismissed the racism of the Nazis.

“Let’s be truthful about it,” Goldberg said on the show. “The Holocaust isn’t about race,” she insisted several times. “It’s about man’s inhumanity to man.”

Her co-hosts pointed out that the Nazi ideology was an explicitly white supremacist and Nazis “considered Jews a different race.”

“But these are two white groups of people,” Goldberg said. “The minute you turn it into race, it goes down this alley.”

She was suspended and ultimately apologized. TMZ suggested that classifying Jews as white and privileged is an attempt to portray them as non-victims, somehow associated with white supremacists and even Nazis.

In a similar manner, in January 2017, not-yet Vice President Kamala Harris rewrote history and reclassified Anne Frank in a stunning display of Holocaust ignorance when she tweeted, “During the Holocaust, we failed to let refugees like Anne Frank into our country. We can’t let history repeat itself.”

Anne Frank was born in Germany in 1929, but in 1934, her family fled to Amsterdam, Netherlands, after Adolf Hitler and the Nazi Party gained control over Germany.  By May 1940, the Franks were trapped in Amsterdam by the German occupation of the Netherlands. Anne lost her German citizenship in 1941 and became stateless. As persecutions of the Jewish population increased in July 1942, they hid in concealed rooms behind a bookcase in the building where Anne’s father worked. Until the family’s arrest by the Gestapo on 4 August 1944, Anne kept a diary she had received as a birthday present and wrote in it regularly. They were taken to concentration camps, and at the age 15, Anne and her sister died in Bergen-Belsen.

Her diary was found after the war and, in 1947, was published under the title The Diary of a Young Girl and has since been translated into over 70 languages.

White privilege is a term that has been adopted by the left-wing to describe the alleged societal privilege that benefits white people over non-white people. It is supposedly rooted in European colonialism and imperialism and the Atlantic slave trade.