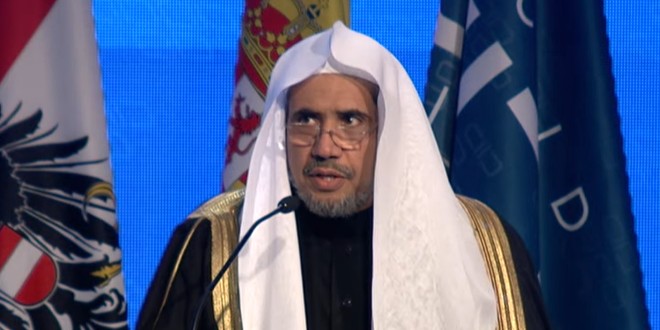 Sheikh Dr. Mohammed bin Abdul Karim al-Issa, a Saudi Arabian politician and the head of the Muslim World League, gave the main sermon and led prayers at the culmination of the annual hajj pilgrimage at the Nimrah Mosque on Mount Arafat outside Mecca on Friday.

His sermon was markedly universal: “All people, whether Muslims or not, respect those with good manners, for sound conduct, is a high human value,” he said. “Love and compassion should prevail in our dealings, and it is part of our faith that we all together unite,” he said, adding that cooperation can preserve the Muslim community’s cohesion.

“This proves the fact that Islam is an all-encompassing spirit that includes goodness to all humanity. Our Prophet has said: ‘The best people are those who are the most beneficial to people.’”

King Salman bin Abdulaziz Al Saud honored al-Issa with the sermon was significant as he is considered a leading global voice on moderate Islam as well as a key figure in the fight to combat extremist ideology. Al Issa has invited rabbis to Saudi Arabia and visited Yeshiva University in New York, which is known in the country as the “Zionist imam.” This extends into his advocating for relations with Israel and Jews. The American Jewish Committee has called Al-Issa “the most powerful voice in the Muslim world promoting moderate Islam.” Elan Carr, the former U.S. Special Envoy to Monitor and Combat Anti-Semitism, said Al-Issa “has chosen a future of tolerance and affection, where Jews and Christians can be embraced by their Muslim brethren.”

In January 2020, Issa led a delegation of Islamic scholars to visit the Auschwitz concentration camp in Poland during the 75th anniversary of its liberation. In a speech on how Muslims and Jews can work together, Al-Issa stated that the Muslim World League is proud to stand “shoulder to shoulder” with the Jewish community to build better understanding, respect, and harmony.

“To be here, among the children of Holocaust survivors and members of the Jewish and Islamic communities, is both a sacred duty and a profound honor,” Al-Issa said during his visit.

“The unconscionable crimes to which we bear witness today are truly crimes against humanity. That is to say, a violation of us all, an affront to all of God’s children.

Standing at Mount  Arafat is one of the four pillars of Hajj and the most important ritual of the annual pilgrimage. An estimated one million Muslims are participating in this year’s Hajj in Mecca.

This comes just before President Biden’s visit to the region. A recent article in MEMRI reported that  Saudi Crown Prince Muhammad bin Salman is pushing to change the conservative policy of his father, King Salman bin ‘Abd Al-‘Aziz, towards Israel. Bin Salman regards Israel as a potential ally and believes that forming ties with it can serve the kingdom’s economic, political, and security interests.

If Saudi Arabia normalizes relations with Israel, it would conform to the prophecy of a pre-Messiah reconciliation between Isaac and Ishmael based on the verse in Genesis in which Ishmael and Isaac come together at Abraham’s funeral.

And Yitzchak and Ishmael, his sons, buried him in the cave of Machpelah, in the field of Ephron, the son of Zohar the Hittite, which is before Mamre. Genesis 25:9

Rabbi Shlomo Yitzchaki, the preeminent medieval French commentator on the Torah known by the acronym Rashi, interprets this verse to mean that Ishmael made peace with Isaac, allowing his younger half-brother to precede him at the funeral.

The Talmud in Baba Batra (16b) predicts that this will have implications for the end of days relating that Ishmael and Yitzchak will have a tenuous relationship, but in the end of days, they will come together as ‘banav’ (his sons). Saudi Arabians consider themselves to be the Sons of Ishmael, and the prophecy can very well be speaking about them.