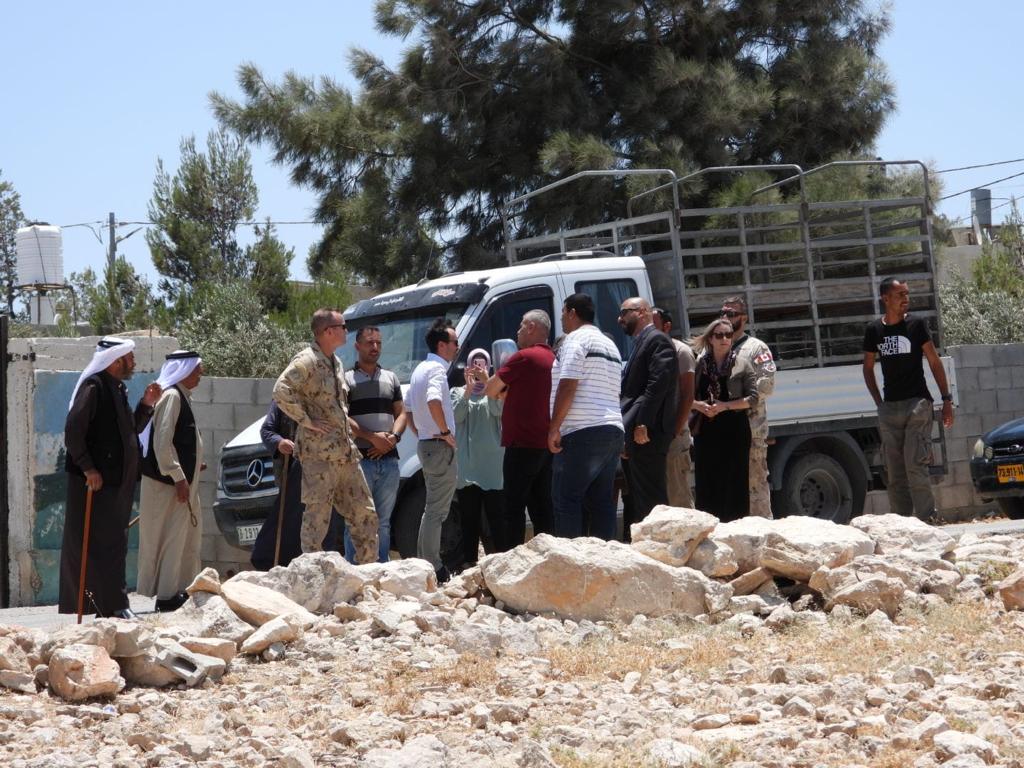 Last Thursday, Regavim, an NGO that monitors illegal Arab construction, reported that a Canadian general accompanied by a delegation including two uniformed military personnel toured a structure built illegally by Arabs on land belonging to the religious Jewish community of Maon in the southern Hebron hills. While there, the Canadian military delegation met with officials from the Palestinian Authority.

The structure was built overnight in Area C, under complete Israeli civilian and security control according to the 1995 Oslo Agreements on land designated for agricultural use by Maon. Residents of Maon alerted the Israeli security administration about the illegal construction while it was underway but to no avail.

Area C includes more than 100 Jewish settlements with an estimated population of more than 400,000 Jewish Israelis. The Coordinator of Government Operations in the Territories in 2012 estimated the number of Arabs living in Area C at 90,000, noting that it was about 3% of the Arab residents of Judea and Samaria. The Palestinian Authority has been engaged in a massive building effort in Area C in blatant violation of the Oslo Accords to take over the region. Much of the illegal Palestinian building is being funded by European sources.

Regavim reported that between 2019 and 2021, the Arabs built 5,097 new illegal structures in areas under the full control of the State of Israel. The total number of illegal Arab buildings in Area C is 72,274. During the same period, Palestinians illegally appropriated  7,125 dunams of land, bringing the total to 93,071 dunams, meaning that Israel is rapidly losing lands in Area C to illegal construction projects executed by the PA.

According to the residents, the IDF Coordinator of Government Activities in the Territories has pledged to enforce the law in the area, but this has not been done so far. The Canadian delegation was also hosted by the Central Command Chief, General Yehuda Fox, meaning that its presence in the area is known and sanctioned by IDF officials.

The Arabs have been aided by anti-Israel groups and Palestinian Authority agents.

The Canadian military personnel was part of Operation PROTEUS, Canada’s contribution to the Office of the United States Security Coordinator (USSC). Other countries contributing to PROTEUS are the Netherlands, Turkey, and the United Kingdom. According to its website, PROTEUS was established to meet U.S. commitments under the Middle East Roadmap for Peace with the stated purpose “to help the Palestinian Authority Security Forces (PASF) build their capacity.”

The Roadmap for Peace was advanced by President George W. Bush in 2003 to counter the Intifada. The PA accepted it, but in the face of ongoing Palestinian violence, the Roadmap was rejected by the Israeli government and was never implemented.

When contacted by The Jewish Press, the Canadian Embassy responded that they were acting on the instructions of the United States’ State Dept.

The Canadian delegation also met with leaders from Surif, located 25 kilometers northwest of the city of Hebron near the settlement of Karmei Zur in Gush Etzion. The Arab delegation alleged that Jewish settlers had attacked them. The alleged attack was reported in November 2021. Another alleged attack in March came in the wake of a Palestinian terrorist attack in Hadera that killed two Israeli policemen.
Surif is a known hotbed of terrorists. In 2005, a senior Hamas leader was captured by the IDF in the town, and one year later, a terrorist cell of four men was captured.

Regavim’s CEO Meir Deutsch criticized the visit by the Canadians:

“Imagine if IDF Chief of Staff Kochavi were to walk around the Canadian border wearing a uniform with ranks on his shoulder and reinforcing criminal border smugglers,” Deutsch said. “Is Canada planning to start a war with Israel?”

“We call today on the foreign ministry to summon the Canadian Ambassador for a reprimand and demand that it be made clear that such an intervention is a fatal blow to international relations. Such gross interference is insane,” Deutsch said.

“Israel acquiesces to PROTEUS interference because they have access to Gaza and can do things Israel cannot,” Khan said. “This happens quite a bit with international observers siding with the enemies of Israel. In this case, visiting illegal structures is outside of the Canadian mandate and a violation of Israeli sovereignty. The state of Israel should behave like a sovereign nation and demand to be treated like a sovereign nation.”

“There is one easy solution,” Khan said. “After the victory in 1967, the state of Israel refrained from extending Israeli law and sovereignty over Judea and Samaria. We were afraid of our own strength. Israel has put a lot of energy into extending its hand in peace, but the Palestinians have refused it time after time. We need to express our sovereignty over these regions. If in the future, there is a good faith expression by the Palestinians for a peace agreement, we can relinquish territory. But keeping them in limbo and allowing the Palestinians to do what they want is not going to bring peace and will only lead to more violence.”