Devora, wife of Lappidoth, was a Neviah; she led Yisrael at that time. 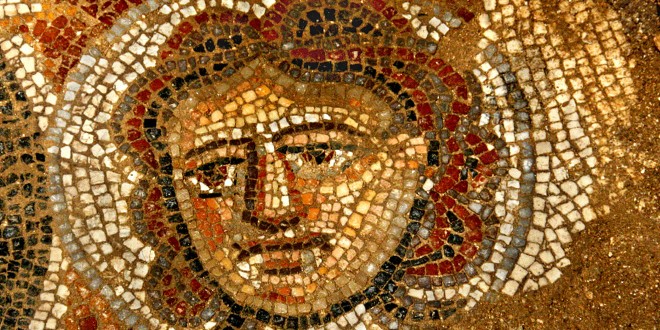 A prominent archaeologist has just announced the discovery of the world’s oldest depiction of Biblical Devorah and Yael.

Prof. Jodi Magness,  a professor of religious studies at the University of North Carolina-Chapel Hill, headed a team of specialists and students to  Huqoq in  Israel’s Lower Galilee to explore 1,600-year-old mosaics in a synagogue. This was the tenth season the team explored the site after the last two seasons were canceled due to the pandemic.

This season, the team unearthed a section of the synagogue floor decorated with a large mosaic panel divided into three horizontal bands (called registers), which depicts an episode from the fourth chapter of the Book of Judges. The chapter describes the victory of the Israelite forces led by the prophetess and judge Devorah and the military commander Barak over the Canaanite army led by Sisera. The Bible tells that after the battle, Sisera took refuge in the tent of a Kenite woman named Yael, who killed him by driving a tent peg through his temple while he slept.

The upper register of the newly discovered Huqoq mosaic is in three parts: The first shows Devorah under a palm tree, gazing at Barak, who is equipped with a shield. Only a small part of the middle register is preserved, which seems to show Sisera seated. The lowest register depicts Sisera lying dead on the ground, bleeding from the head, as Jael drives a tent peg through his temple.

“This is the first depiction of this episode and the first time we’ve seen a depiction of biblical heroines Devorah and Jael in ancient Jewish art,” Magness said. “Looking at the book of Joshua, chapter 19, we can see how the story might have had particular resonance for the Jewish community of Huqoq, as it is described as taking place in the same geographic region – the territory of the tribes of Naphtali and Zebulon.”

The ancient village, located 12.5 km north of Tiberias and uphill from Capernaum and Magdala, is surrounded by cist graves, rock-cut tombs, a mausoleum, quarries, agricultural terraces and installations, a winepress, and an olive press. Two large ritual baths are hewn into the bedrock on the eastern and southern periphery of the ancient village.

Hukkok (Hebrew חקק) is mentioned in the Bible in Joshua 19:34.

Also found among the recently discovered mosaics is also a fragmentary Hebrew dedicatory inscription inside a crown, flanked by panels measuring 6 feet tall and 2 feet wide, showing two vases that contain sprouting vines. The vines form medallions that frame four animals eating bunches of grapes: a hare, a fox, a leopard, and a boar.

Other previously discovered panels depicted the Biblical scenes of Samson and the foxes (Judges 15:4) and Samson carrying the gate of Gaza on his shoulders (Judges 16:3).

Another section of the mosaics depicted a Hebrew inscription promising a reward to those who perform good deeds, surrounded by human figures, animals, and mythological creatures, including putti or cupids.

Another panel shows what Magness claims is the “first unbiblical story ever found decorating an ancient synagogue.” The mosaic depicts the legendary meeting between Alexander the Great and the Jewish high priestץ

The story of this meeting is told in the Talmud, which relates that when Alexander the Great and his conquering legions advanced upon Jerusalem, they were met by a delegation of elders led by the High Priest Shimon Ha Tzaddik (Simon the Righteous). When Alexander saw Shimon approaching, he dismounted and prostrated himself before the Jewish Sage. To his astonished men, Alexander explained that each time he went into battle, he would see a vision in the likeness of this High Priest leading the Greek troops to victory. In gratitude and out of profound respect for the spiritual power of the Jews, Alexander was a kind and generous ruler. He canceled the Jewish taxes during Sabbatical years and even offered animals to be sacrificed on his behalf in the Temple.

The mosaic floor of the north aisle is divided into two rows of panels depicting two of the spies sent by Moses to explore Canaan carrying a pole with a bunch of grapes, labeled “a pole between two” (from Numbers 13:23). Another panel of the mosaic shows a man leading an animal on a rope is accompanied by the inscription “a little child will lead them” (Isaiah 11:6).

The mosaic panels in the nave, or main hall, include a depiction of Noah’s Ark, a depiction of the separation of the Red Sea, a Helios-zodiac cycle, Jonah being swallowed by three successive fish, and the Tower of Babel.

In 2019, the team discovered panels in the north aisle that frame animal figures identified by an Aramaic inscription as the four beasts representing four kingdoms in the book of Daniel, chapter 7. A large panel in the northwest aisle represents Elim, where the Israelites camped near 12 springs and 70 date palms after leaving Egypt and wandering in the desert without water (Exodus 15:27).

“The mosaics decorating the floor of the Huqoq synagogue revolutionizes our understanding of Judaism in this period,” said Magness in a 2018 press release. “Ancient Jewish art is often thought to be aniconic or lacking images. But these mosaics, colorful and filled with figured scenes, attest to a rich visual culture and the dynamism and diversity of Judaism in the Late Roman and Byzantine periods.”

The mosaics were removed from the site for preservation, and the excavated areas were backfilled. Excavations are expected to continue in the summer of 2023.