Hashem will call every creature to account for everything unknown, be it good or bad. The sum of the matter, when all is said and done: Revere Hashem and observe His commandments! For this applies to all mankind. Ecclesiastes 12:14 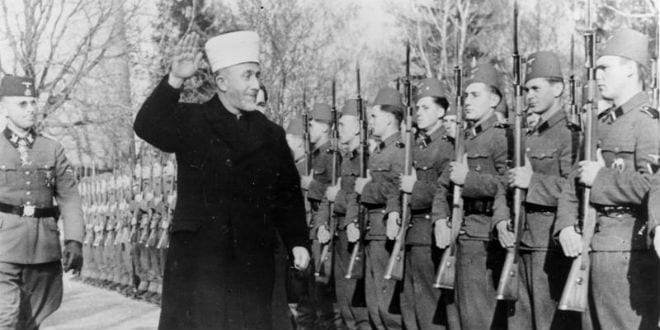 As the scion of the al-Husayni family of Jerusalemite Arab notables, Husseini was considered an important ally by the British authorities during the mandate period.

It is undeniable that during World War II, many Muslims allied with Germany, and hundreds of thousands of them fought for the Nazis. Husseini contributed to the Nazi war effort by setting up Bosnian Muslim battalions attached to the Waffen-SS. These soldiers fought Partisans in Bosnia and massacred civilians there. Husseini also tried to convince the Axis authorities to bomb Tel Aviv and extend the “Final Solution” to the Jews in North Africa and Palestine. When he was informed of various Nazi plans to exchange Jewish lives for goods or large sums of money, he strenuously lobbied against them.

“The most important collaborator with the Nazis and an absolute Arab antisemite was Haj Amin al-Husseini, the mufti of Jerusalem,” researchers said, noting that al-Husseini and Heimlich Himmler, the Nazi leader, attributed the greatest responsibility for the effort to exterminate the Jews, met numerous times toward this end.

“The Allied defeat of Rommel at the end of 1942 had prevented the extension of the Holocaust to Palestine,” the researchers concluded.

It is also well-documented that al-Husseini met with Hitler in 1941, requesting and receiving a promise not to permit Jews fleeing Europe to arrive in Palestine, a plan that the English and American governments were initiating. This undoubtedly led to many Jews being unable to flee and dying in Nazi death camps, with some scholars arguing that Husseini made the Holocaust inevitable by shutting out the possibility of Jews escaping to Palestine.

So great was al-Husseini’s hatred for the Jews that he incited the Palestinians in the British Mandate to conduct pogroms. After leading an Arab revolt against the British, he fled to Iraq in 1941, where he incited violence against the large Jewish communities there.

He continued his antisemitism after he was exiled to Iraq, where, in 1941, he helped instigate anti-Jewish riots called the Farhud.

The admiration al-Husseini had for Hitler was mutual. While he denounced Catholicism as a weak, effeminate religion, Hitler praised Islam as a strong, aggressive, martial religion.

Research has shown that the Holocaust almost spread to the Holy Land. In 2006, historians at the University of Stuttgart concluded from their studies of Nazi archives that a unit of SS troops stationed in Athens was tasked with following invading frontline troops in Palestine and then rounding up and murdering about 500,000 European Jews who had taken refuge there as a Middle Eastern aspect of the Final Solution.

Husseini wasn’t even initially a Palestinian nationalist. Until 1921, he strongly supported a Greater Syria, not an independent Palestine. To establish a Palestinian claim to the Holy Land, Husseini launched an international campaign in Muslim countries to gather funds to restore and improve the Temple Mount, which had been largely ignored and neglected under Ottoman rule. The claim that Jews threatened the Muslim structures at the site originated with Husseini.