He said, “What shall I pay you?” And Yaakov said, “Pay me nothing! If you will do this thing for me, I will again pasture and keep your flocks. 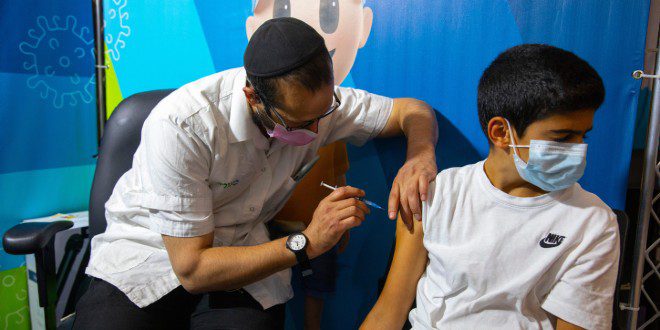 Although the Pfizer and Moderna vaccines against the Coronavirus given to children aged five to 11 have been recognized by the US Food and Drug Administration as safe and effective in preventing serious illness, it has been found to prevent infection with the Omicron variant in just 51% of youngsters – a similar figure to that recorded in adults.  Protection against infection among children with symptoms was 48%.

Neither of the vaccines has been tested against new subvariants that are circulating around the world. The clinical trials were largely conducted when the Omicron variant prevailed. Two subvariants, BA.4 and BA.5 are becoming dominant.

Both Pfizer and the Moderna pharmaceutical company have just developed a special vaccine against the Omicron sub-variants that constitute almost all infections today, but they have not yet been approved by the FDA. When the major COVID-19 strain was the Delta, the Pfizer vaccine offered protection against infection and serious disease to 91% of those who got the three shots.

“The protection provided by the vaccine was not uniform across all age groups in the study,” said Prof. Ran Balicer, chief innovation officer of Clalit Health Services (Israel’s largest health maintenance organization” who headed the research. The data show that better protection was recorded in the younger age group (ages five to six) compared to the older age group (11-10),” he said. “We are presenting the data to the public so that every parent can make an informed assessment and make a decision.”

After the FDA approves giving the existing Pfizer vaccine – approved for everyone from age six and up – to infants aged six months through five years but in smaller doses, it will soon after be provided to all parents who want their children to get the shots.

The Clalit study was conducted from November 2021 to January 2022, when the Omicron strain was common in Israel. Researchers from Harvard University in Boston, Padua University in Italy and the University of London in the UK participated.

“Previous studies we have shown have shown high efficacy of the first doses of the vaccine in the prevention of symptomatic Delta strain among adolescents, Balicer continued. “It is difficult to determine which part of the decrease in infection protection can be attributed to the reduced dose of the vaccine, and which part can be attributed to differences in vaccine efficacy compared to the Omicron strain compared to Delta. There is no doubt that the reality now is more complex than before.”

The FDA’s advisory panel on COVID-19 voted unanimously (21-0) last week to recommend the Pfizer and Moderna vaccines for infants aged six months through children aged five. Parents who want it for their young children may be able to start getting it this week. States have already ordered millions of doses, and White House officials have said shots could roll out as early as next week. The advisory panel stated last year that the existing vaccines prevent serious complications and deaths among those who receive three shots.

Officials from the US Centers for Disease Control and Prevention said that more than half of young children hospitalized with Covid-19 had no underlying medical conditions. During the Omicron wave in the winter, young children were hospitalized at a higher rate than older children and adolescents, and their illness tended to be at least as severe. More than 200 American children ages six months through four years old who could not be vaccinated due to the lack of approval have died of Covid, according to death certificate data.

“There are so many parents who are absolutely desperate to get this vaccine,” said pediatrics Prof. Jay Portnoy of the University of Missouri-Kansas City medical school. “I think we owe it to them to give them the choice.”