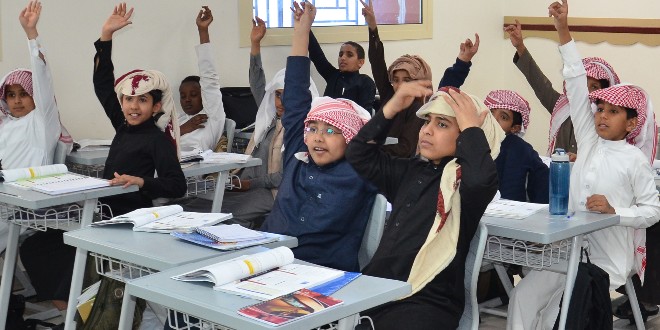 Antisemitism was by in large deleted from Saudi Arabian textbooks, The Institute for Monitoring Peace and Cultural Tolerance in School Education (IMPACT-se) revealed in its annual report on education in the Kingdom.

The report, published last week, discovered that content that portrayed Jews as insubordinate and teachings of antisemitic stereotypes, including Jews being wealthy, was eliminated from the country’s curriculum.

Riyadh has experienced a trend of progress in deleting antisemitism from its curriculum recently, IMPACT-se reported.

The institute said that verses in the Koran of Jews turning into monkeys were eliminated and the antisemitic trope that one of Zionism’s objectives is a “global Jewish government.”

Additionally, Koran verses against befriending Jews and Christians as well as condemning homosexuality have all been deleted over the last three years.

Additionally, an entire textbook chapter on jihad was removed from the curriculum.

The previous year, a unit entitled “the Zionist danger,” which touched on a range of topics delegitimizing Israel’s right to exist, was eliminated.

The report also revealed that Israel is still nowhere to be found on maps displayed in textbooks, and Zionism is still called “racist.”

Saudi students are taught the falsehood that “Zionists” intentionally tried to burn down the Al-Aqsa Mosque in 1969, propaganda that was eliminated from Qatar’s curriculum. Additionally, a verse in the Koran that compares Jews to “book-carrying donkeys” was not removed.

“Reaching for international standards of tolerance in school education will prepare Saudi children and those in other countries that use Saudi textbooks with the skills to positively interact with the different cultures and worldviews,” Sheff said. “Particularly Jews, who were greatly demonized before the reforms.”