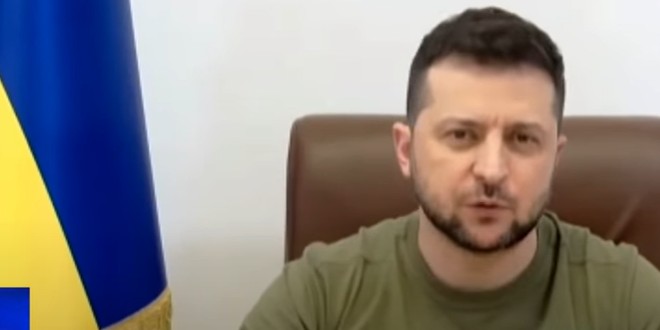 Ukrainian President Volodymyr Zelensky addressed the Hebrew University of Jerusalem in a live speech from Kyiv last Thursday, expressing frustration that Israel is not doing more to help Ukraine defend itself against Russian invasion.

The speech was broadcast on the university’s social media channels and followed by a short question and answer session with students and staff.

“When the war will end, and I believe it will,” Zelensky said, “we will have to look into one another’s eyes for many generations to come. That’s why I wanted to speak with you, the current generation, today.”

Zelensky singled out Israel a number of times for not doing more to help Ukraine. “This is about values,” he said. “Anyone who seeks to destroy another country needs to be held accountable. Unfortunately, we have not yet seen Israel join the other countries that are boycotting Russia.”

“Tell me how can you not help the victims of such aggression?” he asked the audience. “I’m asking this question because I know that you are not indifferent. You do care, as do hundreds of millions of people around the world.”

“We appreciate the support we’ve received from the citizens of Israel and now ask for support from Israel’s government as well,” he said. “Please help the Ukrainian people in their distress.”

Israel has sent protective gear to Ukrainian emergency responders and was the only country to operate a field hospital in the country this year, which treated some 6,000 patients. In addition, Israel has absorbed thousands of Jewish and non-Jewish Ukrainian refugees.

Diplomatically, Israel has changed its stance, voting for condemnations of Russia at the United Nations after refraining from doing so at first. The IDF has contributed by sending helmets, flak jackets and body armor to Ukraine.

During the Q&A session after Zelensky’s speech, several Hebrew University students asked what could be done to keep the world’s attention on news of the war in Ukraine. Another student, born in the Ukrainian city of Kharkiv, proudly told Zelensky that her father is in Ukraine fighting against the Russians.

Moved by this, Zelensky said, “Ukraine’s warriors and civilians need medication, drinking water, fuel. People forget that there is a war going on in Ukraine.”

“No matter where you are, where you study, you can help those that are fighting,” he said. “We have many student volunteers who are collecting donations online to send food and medication to our cities under attack. We also have student volunteers writing on social media to make sure the world doesn’t forget about the war and to spread the truth to the world.”

Zelensky, who is Jewish, spoke of his and his nation’s ties to the Jewish people, noting, “My office is located in the very center of Kyiv. Nearby is the house where Golda Meir grew up. Not far is where Shalom Aleichem lived. This is the heritage of Ukraine. … It isn’t just historical facts. It’s real human life that has brought our cultures together.”

Zelensky lamented the impact the war has had on national monuments in Ukraine, including the one at Babi Yar honoring Jewish victims of the Holocaust.

“The Russians even bombed Babi Yar,” he said. “We all remember and treasure these sites. This is all under threat. How can you preserve memorial places during an all-out war?”

Zelensky noted the difference between the calm and attentive Hebrew University auditorium and the current state of Ukraine’s universities.

“2,000 academic institutions in Ukraine have been destroyed,” he said. “Can you imagine it, sitting in your lovely auditorium in Hebrew University?”

He added, “Week after week, the Russians are trying to hide the fact that they’ve been burying dead Ukrainian civilians in unmarked graves. They’re killing and raping and torturing innocent civilians along the way. … By our estimates, more than 12 million Ukrainians have been displaced. We haven’t seen these numbers since World War II.”

In his remarks, Hebrew University President Prof. Asher Cohen said Zelensky’s address “is a seamless continuation of our policy to not remain indifferent when innocent people are killed, families are destroyed and life is put on hold by an unjust and unnecessary war.”

Cohen said people cannot “remain passive” and “we must do everything in our power to reach out and help the people of Ukraine.”

Looking ahead, Zelensky was optimistic about Ukraine’s candidacy for European Union membership.

“We’re moving towards a new future, closer to the European family,” he said. “Soon we will be part of that family. This is for our children—to become a European state that will be part of the E.U. This will provide us with strong protection.”