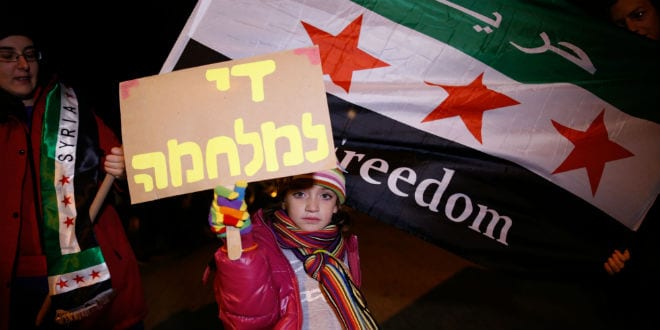 Syria is in the crosshairs of renewed focus. This takes place in the context of Russia’s conflict in Ukraine and Russia-US tensions, as well as Israel-Iran tensions. Part of the new focus is known, but recent reports seem to point to shifting tectonics on Syria and raise questions about what might come next.

At the center of the Syria issue is that the country has been “in play” for the last decade. Before the Syrian civil war, there were efforts in the US and the West to normalize the Assad regime and bring it in “from the cold” so that it would be part of the West, rather than part of the Iran-Russia alliance system. The regime was even considering a deal regarding the Golan Heights.

However, the Syrian civil war led the regime to rely more on Hezbollah, and Iran’s Islamic Revolutionary Guard Corps entered Syria to help the regime. Russia intervened in 2015 at the invitation of Damascus to help defeat the rebels. With the rebels mostly defeated by 2018, it was Turkey’s turn to intervene. Syria became like Germany was to Europe during the Thirty Years’ War – a place where countries intervene and where the locals pay the price.

The Turkish intervention has now destroyed part of northern Syria, ethnically cleansed Kurds, Yazidis and Christians and given extremists a huge foothold in Idlib and Afrin. The US intervention backing the SDF led to the defeat of ISIS in eastern Syria. Iran has taken over areas of influence from Albukamal to south of Damascus, Deir Ezzor areas, as well as tentacles stretching to Aleppo and T-4 base. Russia has forces in Latakia and Damascus.

Israel is conducting its campaign between the wars in Syria against Iranian entrenchment. Iran is moving proxies to Syria, as well as drones and other threats. Prime Minister Naftali Bennett has vowed to confront the “head” of the Iranian octopus in the region.

Reports have spread rumors that Russia may reduce its forces in Syria. Iran could backfill the areas where Russia may reduce forces. That would destabilize parts of Syria. Foreign reports say Israel bombed Damascus International Airport recently and that the regime is now repairing the airport. This was one of many recent Israeli strikes reported in foreign media.

New reports show that all the focus is turning to Syria now. Not only has NBC said Iran has carried out dozens of attacks against US forces since last October, including attacks in Syria and Iraq, it has hinted that the US didn’t respond.

Russia is now escalating in Syria. “Escalating,” as The Wall Street Journal headline calls Moscow’s actions, is in contrast to the articles that said Russia might leave. Russia has threatened US-backed Syrian rebels based at Tanf garrison near the Jordan border. Another Journal report said the US secretly reviews Israel’s plans for strikes against Iranian targets in Syria.

The report discussed matters that were already partly known.

The US approves of Israeli strikes, and there is coordination with the US, the report said. The US is concerned that strikes could impact its role in the anti-ISIS mission. Concerns about this have been openly and publicly stated in US government reports going back several years.

James Jeffrey, who served as the Trump administration’s Syria special representative and envoy for the anti-ISIS mission, told Al-Monitor in December 2020: “We also had the Israeli air campaign. The US only began supporting that when I came on board. I went out there and we saw Prime Minister [Benjamin] Netanyahu and others, and they thought that they were not being supported enough by the US military, and not by intelligence. And there was a big battle within the US government, and we won the battle.”

He previously said in an article at the Washington Institute: “While Syria used to be an independent state allied with the Islamic Republic, it is now entirely reliant on Tehran and can no longer act independently. Israel faces a fundamental threat from this northern coalition, and the American security system has been unable to act effectively against it.”

He also told an interviewer in late 2018: “We understand why Israel feels itself existentially threatened by Iranian long-range systems in Syria. And we support fully Israel’s efforts to protect its national security.”

His comments show that the previous administration sought to increase coordination with Israel, and once Israel was under the US Central Command area of operations, this became more logical and easier to accomplish.

All eyes have now turned to Syria again, with the crisis in Ukraine and other issues in the region. It remains to be seen if the new focus on Syria will lead to a shift in Iran’s tactics and how the coordination with the US continues to potentially grow in relation to Iran’s threats.