Biden Will Do Everything He Can to Help Lapid

Home » Biden Will Do Everything He Can to Help Lapid 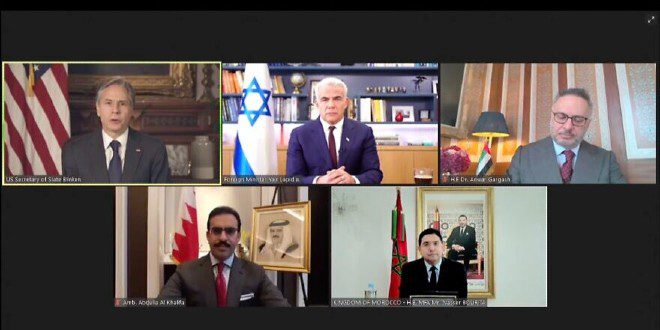 The latest developments in Israeli politics provided President Joe Biden with a good excuse to postpone his visit to Israel next month. With the collapse of Israel’s coalition government this week, the country is saddled with an interim government headed by an unelected prime minister in Yair Lapid who is about to launch his campaign to hold onto the office. Scheduling a visit by the leader of Israel’s sole superpower ally at the start of what promises to be a bitterly fought election campaign will make it clear that Washington is far from neutral when it comes to the outcome.

And that is exactly the impression that Biden is hoping to leave when he goes to the Jewish state in July.

Far from being an unwelcome development, the exit of Naftali Bennett from the prime minister’s office is good news for the Biden administration. It viewed Bennett—the leader of a small party that was actually to the right of the Likud and former prime minister Benjamin Netanyahu—as a necessary evil. Since his decision to throw in with Lapid and the ragtag coalition of parties from the left, right, center and one Arab Islamist faction was the only reason that Netanyahu was ousted, Biden and his foreign-policy team treated him with kid gloves over the course of his year in Israel’s top job.

The administration was itching to bash the Jewish state over every new home built in Jerusalem or Judea and Samaria, as well as for every ginned-up dispute about the Palestinians involving Israeli self-defense against terrorism. It was also less than enthused over Jerusalem’s ongoing campaign to sabotage Iran’s nuclear program that was being conducted even as the Americans were desperately trying to convince Tehran to cut a new and even weaker deal. But they passed on every opportunity to do so, signaling that their preference was for the Bennett-Lapid coalition to somehow cling to power. Bennett repaid their courtesy by declining to push openly for Americans to speak up against the new push for appeasement of Iran, thereby undermining critics of Biden’s feckless policy among both Democrats and Republicans.

According to the coalition agreement, Bennet’s fall means that Lapid will become premier until a new one can be elected. That provides Biden with a far more accommodating Israeli counterpart. Not only can Lapid be counted on to back the administration when it comes to Iran, but his support for the intellectually bankrupt two-state solution approach to the Palestinians would allow the Biden team to revive the same delusional peace-process policies most of them pursued when serving under former President Barack Obama.

That is, if he can hang on to the prime minister’s office.

While Lapid’s Yesh Atid Party remains the second-largest in the Knesset and is likely to hold onto that distinction in the next election, it will still rank far behind Likud. The notion that Netanyahu’s corruption trial, which drags on endlessly despite the weakening of the already flimsy case against him during the course of its first year, will hurt him has already exploded. There doesn’t seem to be any scenario in which Lapid can put together a 61-seat majority, even if parties like Avigdor Lieberman’s Yisrael Beiteinu, Gideon Sa’ar’s New Hope or even Bennett’s Yamina—all of which oppose the new prime minister’s views on security and the Palestinians—stick with him.

Lapid’s best chance to keep Netanyahu out of office is another stalemate, much like the results of the four elections that were held between 2019 and 2021. As the caretaker prime minister, Lapid can hold onto his new title, much as Netanyahu did during that period, as long as there is no duly constituted new governing majority.

And to achieve that goal, he can count on any help that Biden is able to give him.

Despite the righteous indignation that Americans feel about the thought of other nations intervening in their politics—such as the outrage that the hoax/conspiracy theory about the Russians colluding with former President Donald Trump to steal the 2016 election generated among Democrats—the United States has a long history of trying to influence democratic elections elsewhere, especially in Israel.

In the last 30 years, presidents from both American political parties have sought to prevent Likud governments from being formed. President George H.W. Bush did his best to help Yitzhak Rabin topple Yitzhak Shamir in 1992. President Bill Clinton did everything but canvas door-to-door in Tel Aviv in a vain quest to aid Shimon Peres’s doomed effort to defeat Benjamin Netanyahu in the months after Rabin’s assassination. He had better luck three years later when Ehud Barak knocked off Netanyahu in 1999.

A decade later, in his first months in office, Obama openly plotted to prevent Netanyahu from forming a coalition after the 2009 election and then spent the next years trying unsuccessfully to ensure that his government fell. In fact, Obama never stopped scheming against Netanyahu as his opposition to efforts to pressure the Jewish state to make dangerous concessions to the Palestinians, coupled with his campaign against the Iran nuclear deal, made his defeat something of an obsession for that administration. Indeed, in one of the more brazen acts of intervention, the Obama State Department even helped funnel cash to efforts that helped Netanyahu’s opponents under the guise of funding “pro-democracy” efforts in Israel.

By the same token, former President Donald Trump did all he could to help Netanyahu in the three elections held in 2019 and 2020 with both unprecedented pro-Israel policies and giving his ideological ally the benefit of stage-managed events that touted the Abraham Accords.

So, there will be nothing new in Biden seeking to put his finger on the Israeli electoral scale for Lapid. Still, the next prime minister needs to be wary of the American embrace. The more that Biden makes his distaste known for a Netanyahu comeback—and a snub of the opposition leader next month is a given—the more ammunition it will provide the Likud Party.

Netanyahu lost office because Israelis were no longer deeply divided on security issues since a consensus that stretches from the center-left to the right believes that there is no peace partner, as well as for the necessity of the country doing everything in its power to stop an Iranian nuclear weapon. The more Biden makes obvious his preference and that a new right-wing/religious coalition will result in American disfavor, the more it will impress upon Israeli voters that another stalemate will mean that policies they regard as dangerous will be pursued—something not true of the Bennett-Lapid government that was too weak and divided to do anything important. That would make it clear to the electorate that allowing Lapid to stay in office means issues of war and peace—and not how tired they are of Netanyahu and his family—should be the decisive factor in the outcome.

All of this means that the Israeli section of Biden’s tour will be even more closely watched than it might have been had Bennett hung on. Yet Biden and the rest of the Obama alumni that run U.S. foreign policy these days should remember that the more they bashed Netanyahu in the past, the stronger he became. A repeat of that formula might be just the thing to enable the Democrats’ bête noire to secure the 61 Knesset seats that he needs to win the election outright. If he does, that will undoubtedly mean a new period of tension and conflict between Washington and Jerusalem. But this wouldn’t be the first time Israeli voters demonstrated that they don’t like taking instructions from American politicians.