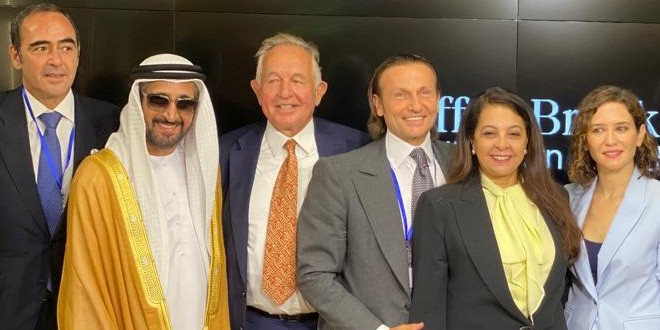 Just over three decades after the Madrid Peace Conference, the city hosted the first Madrid and The New Middle East Business Summit to promote investment and trade relations between the United Arab Emirates, Israel and Spain. The Summit was composed of various conferences and round tables with prestigious representatives from the business and financial worlds of the three countries, and was attended by close to 200 businessmen interested in developing commercial and investment operations between the nations.

The initiators and founders of the summit are two renowned businessmen from Madrid, David Hatchwell, President of EXCEM Group and Borja Gervás, President of Access UAE,  both with extensive experience in the territories of the UAE and Israel, respectively.

Isabel Díaz Ayuso, President of the Community of Madrid, inaugurated the historic event, and emphasized the importance of positioning Madrid as a leading economic hub, while promising to continue to work to cooperate on initiatives related to digitalization, cybersecurity and entrepreneurship. “Madrid will always defend freedom, rule of law, and prosperity, and will always be thinking about the future,” she said, emphasizing Madrid’s economic relations with both the UAE and Israel.

Ambassadors of Israel, Rodica Radian Gordon, and of the United Arab Emirates, Majid Hassan Mohamed Hassan Al Suwaidi, spoke at the conference: “A future of shared prosperity for the Middle East”.

“Three decades after the historic Madrid Peace Conference, this city and Spain as a whole, with its rich Jewish and Muslim history and record of coexistence is once again leading the way towards closer relations amongst nations in the Middle East,” Hatchwell said. “There is a great importance placed on peace between governments, but more importantly peace is made between peoples, and the business sector has a great role to play in this respect”.

“We hope that for the next Summit we can count on more participating countries like Bahrain, Oman and Egypt, among others”.

The round table “Joint investment opportunities in the UAE, Israel and Madrid” was moderated by Alfredo Bonet, member of the Executive Committee of Madrid Open City, and included the participation of Minister of Economy, Finance and Employment, Javier Fernández-Lasquetty, who highlighted that “the Community of Madrid aspires to become the technological hub or epicenter for the concentration of companies in the sector in Southern Europe”.

The common element of the rest of the conferences was the identification of synergies between the Middle East and Spain, with special emphasis on the sectors of Infrastructure, Mobility, Smart Cities, Health, Agri-Food Technology, Cybersecurity and New Technologies, Cryptos and Mining.

Begoña Villacis, Deputy Mayor of Madrid, explained how she valued both the public and private sectors, highlighting the need for both sectors to cooperate rather than compete. “Israel, UAE and Spain want to work with trust and confidence, generate trade, and maintain friendship. In Madrid, we are a space offering great opportunities, and investors are realizing this. All those who want to start projects here are welcome,” Villacís concluded.

Madrid and The New Middle East is supported by the Community of Madrid, through Invest in Madrid, the Madrid City Council, the Embassy of Israel in Spain, the Embassy of the United Arab Emirates in Spain, Madrid Open City, Access UAE, Zakut Innovation Hub, EXCEM Group, Energer, EMT, Astara, the Spain-Israel Chamber of Commerce and Industry, the Madrid Chamber of Commerce and Spanish Business Council of UAE.