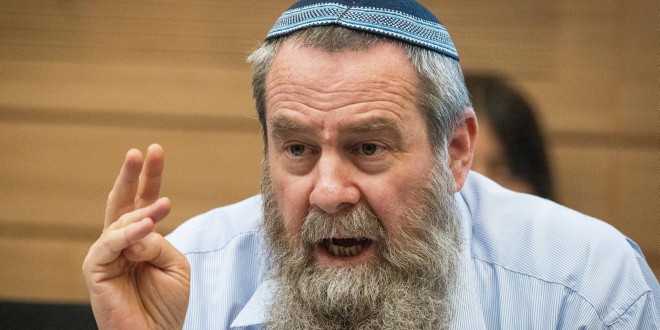 In an interview on Monday, MK Avigdor “Avi” Maoz (Religious Zionist Party) was asked about the coalition breaking up, forcing new elections. Maoz requested that US President Biden cancel his planned visit to Israel next month as it would influence the upcoming Israeli elections. The Biden administration has confirmed that the visit will occur as scheduled. But it should be noted that it is customary for the US to time these visits so as not to precede elections. It should also be noted that the Democratic party has conspicuously violated this custom regarding left-wing Israeli candidates and Democratic administrations have a history of actively meddling in Israeli elections.

Maoz is right-wing and a frequent target of anti-Israel left-wing groups in the US.

In the interview with Hebrew-language Arutz Sheva, Maoz expressed his belief that the dissolution of the Bennett-led government was a “positive step for the People of Israel.”

“Either we will go to elections, or we will form a real un-neutered right-wing government from the existing Knesset,” Maoz said. “Both of these alternatives are for the good of Israel.”

“They are both better than this bad government,” he added.

He was asked about the arrangement in which Yair Lapid, Foreign Minister under Bennett and the head of the Yesh Atid party, will serve as the interim Prime Minister until the elections.

“This is problematic for Israel,” Maoz said.

“This visit interferes with the Israeli elections system,” Maoz said.

Maoz’s warning is firmly based on past experiences, as meddling in Israeli politics is a tradition in the Democratic party. In 1996, President Bill Clinton acknowledged that, in the wake of the assassination of Prime Minister Yitzhak Rabin in 1995, he interfered on behalf of Shimon Peres against Benjamin Netanyahu.

In 2013, Obama’s State Department provided One Voice with almost $350,000 in grants. Soon after the end of the grant period, OneVoice embarked on a political campaign titled “Victory 2015 (V15),” a campaign seeking to defeat Prime Minister Benjamin Netanyahu in the March 2015 elections. Because of its tax-exempt status, OneVoice is legally prohibited from campaigning against Netanyahu directly. V15 was assisted by Jeremy Bird, President Obama’s deputy national campaign director in 2008 and national campaign director in 2012. A U.S Senate investigation concluded that none of the money was used to influence Israel’s elections.

At the time, Israeli law prohibited large contributions to political parties from foreign sources, but since V15 was not a political party, the interference was considered legal. Israeli campaign laws have been modified as a result of what is now considered a loophole.

At the same time, the U.S. State Department initiated a program that brought leaders of Arab communities in Israel to the U.S. to “learn how to vote.” The Arab parties support left-wing coalitions in Israeli governments.

Interestingly, when Netanyahu addressed Congress in March 2015 in opposition to the Iran deal, then-President Obama opted not to meet with him.

“As a matter of long-standing practice and principle, we do not see heads of state or candidates near their elections to avoid the appearance of influencing a democratic election in a foreign country,” the White House stated as an explanation.

Though this may have been an accurate representation of his administration, this clearly was not a platform of the Democrats. In 1996, prime minister Shimon Peres was fighting a close campaign against Netanyahu. Peres was invited by then-President Bill Clinton to the White House on April 30, less than a month ahead of the May 29 elections.

Biden seems to be following this tradition. An article in Tablet Magazine in March 2021 asserted that US President Joe Biden was interfering in Israel’s elections “by strong-arming the Emiratis into publicly distancing themselves from Bibi (Netanyahu).”