Archaeologists discover ancient board game Goliath may have played

While he was talking to them, the champion, whose name was Goliath, the Philistine of Gath, stepped forward from the Philistine ranks and spoke the same words as before; and David heard him.

Home » Archaeologists discover ancient board game Goliath may have played 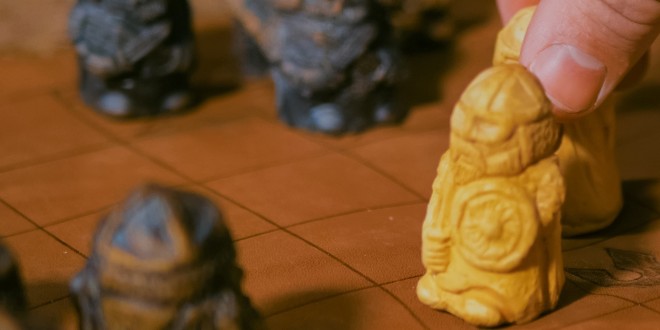 Archaeologists were researching a Bronze Age excavation at Tell es-Safi when they found fragmentary finds of the 4,500-year-old gameboards and game pieces. The site, located about 22 miles northwest of Hebron, is believed to have been Gath, the home of David’s Biblical Philistine nemesis, Goliath.

“The most common board game in Bronze Age Canaan was the Game of 30 Squares, known as Senet in Egypt,” wrote the authors in the initial research report in 2017, identifying the pieces from Gath as a version of the game still largely popular in Egypt, Sudan, South Sinai, and the Negev. “Because the earliest Egyptian example comes from a Predynastic tomb at el-Mahasna (dated to c. 3500 B.C.E.), some scholars believe that Senet originated in Egypt and was later introduced into Canaan as the Game of 30 Squares.”

The word senet is a form of the Egyptian verb “to pass.”

“The senet game is a racing game, and the goal is to win by being the first to reach the final squares on the board,” lead author Dr. Shira Albaz, the manager of Bar-Ilan University’s Tell es-Safi/Gath Archaeological Project, explained. The aim is to be the first to maneuver one’s pieces around a formalized track to reach the last square on the board. Proceeding in a serpent-like fashion, players move the pieces on the first row from left to right, from right to left on the second, and so forth. Everyone’s turn is determined by throwing dice or casting sticks.

Three boards were found, one double-sided, possibly serving children on one side and adults on the other. Researchers also reported finding a Canaanite version of Senet called “30 Houses”. This game has also been found at digs in Megiddo, where three board games date to circa 3600–3100 BCE. Additionally, evidence of 55 board games was discovered in the Early Bronze Age II levels (circa 3100–2500 BCE) at Arad.

The find included four gameboards made of soft chalkstone, multiple dice made out of worn and polished astragalus or ankle bones, throwing knucklebones, and several other carved pieces made from baked clay and animal bones. According to the article titled, “Daily Life and Cultural Appropriation in Early Bronze Age Canaan: Games and Gaming in a Domestic Neighborhood at Tell eṣ-Ṣâfi/Gath, Israel,” gameboards and pieces artifacts from the Neolithic period onwards have been found in the southern Levant. The layer in which the boards were found dates to 2800–2600 B.C.E. The site was abandoned immediately afterward.

Research at the site first began in 1997, and Dr. Albaz has been studying the site since 2009. At the behest of director Prof. Aren Maeir, Albaz focused on researching the everyday life of the past inhabitants rather than the monumental buildings and events.

“When we found the second gameboard and the pieces of games, we said there is probably something here, so let’s try to investigate and see if there are more potential game pieces and boards,” Albaz told Times of Israel. “We started to see if we could understand which game was being played, the role of games in daily life — and did people have time to play?”

Though some scientists believe that Early Bronze Age society was a subsistence culture, Albaz believes the culture was far richer and diversified.

“They must have taken breaks and time for resting… and not only for breaks from work and life but also for fulfilling the self,” Albaz said.

The board games were not readily evident during the excavation and were discovered when dismantling the courtyard walls.

“In the beginning, I thought it was a regular stone, but when we checked, we saw the carving, washed it, and understood it was really a board game,” said Albaz.

Archeologists began digging in 1996 but never found evidence of a city standing at the time that a young shepherd named David faced off against a heavily armored Philistine giant from the city of Gath. Nonetheless, they are now sure that the city at Tell es-Safi was inhabited by the Philistines as far back as 5,000 BCE.  Researchers have yet to find any conclusive evidence naming the site explicitly as Gath but Tell es-Safi is the best candidate.

The 11th-century BCE city was outstandingly large and would have covered an area of 123.5 acres. This establishes Gath as a major regional power already in the early Iron Age in a manner consistent with the Biblical narrative. The settlement was destroyed by the Aramean King Hazael around 830 BCE, as described in the book of II Kings.

Archaeologists also found indications of a catastrophic earthquake in the 8th century BCE, in what the team says could be the disaster mentioned in the Book of Amos.

Though many archaeologists assert that the Biblical account of Goliath is fictitious, in 2006, lead archaeologist Aaron Maier presented his find of the “Goliath Inscription”:  a Philistine inscription from the mid-ninth century BCE, the oldest ever discovered,  which was found at Tell es-Safi. The inscription included two names, the first consists of four Semitic letters: TWLA [Hebrew font, alef-lamed-vav-tav], which Maeir said may be the equivalent of the name Goliath.  Although it was written with Semitic letters, the name was known to be Philistine.

In his report, the archaeologist insisted that the inscription could not be referring to an actual historical person named Goliath.

“Maeir stresses that the Goliath of the inscription from Gath is not the Biblical Goliath,” the report read. “Most scholars regard the Goliath story as legend rather than history.  The inscription does, however, give a real-life context to the story, and it demonstrates that the name Goliath was probably in circulation in Gath about a century or so after the legendary battle between David and Goliath, according to the Biblical chronology.