If a man lies with a male as one lies with a woman, the two of them have done an abhorrent thing 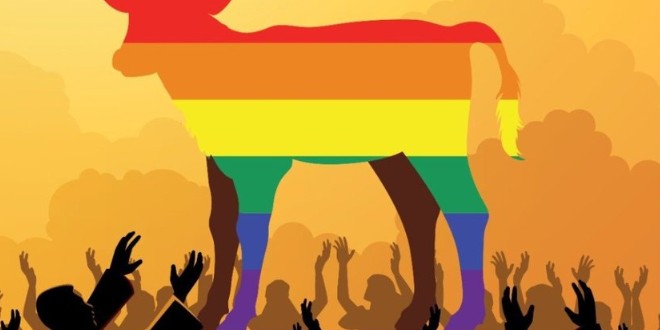 The right-wing Channel 14, what many consider the ‘Fox News of Israel,’ published a new magazine on Monday. Its cover features a caricature of people worshipping a rainbow “golden calf.” The title reads: “LGBT-stan: how radical leftist groups control Israel with the religion of LGBT.”

In response, some fellow journalists have pledged to boycott Channel 14, including Ynet’s parliament reporter Yuval Karni who said that although he has friends at Channel 14 and even interviews there “once in a while.” He added that he would stop interviewing with them following the Now Magazine cover’s publication.

The magazine cover caused so much controversy that some of Israel’s biggest corporations who sponsored the magazine distanced themselves from the publication. They include Supersol, Celcom, and Carso Car Group, who have all been pressured to release statements against the magazine.

Ironically, the magazine has a relatively low readership, but this latest controversy gave it more publicity than it could ever dream of.

The magazine’s cover story comes right before June, which the LGBT community refers to as ‘Pride Month’; Jerusalem will be hosting a Pride March on Thursday.

Anti-open borders activist Sheffi Paz, who also identifies as a lesbian, blasted Karni’s Karni’s reaction, writing, “you’re welcome to join a meeting of right-wing LGBT folks and hear the connection between the (gay) community and the radical left. We can’t always stand with the left and force an agenda upon the traditional, religious, and Haredi populations. ” according to Channel 14.

Last week, Israel365 News reported that the dean of the Mitzpe Ramon hesder yeshiva (seminary) is under fire from Israel’s LGBT community after calling on his students to “fight” against the gay agenda in a recent lecture, telling his audience to say “gays, go home!” in their workplaces, according to footage shared by KAN news.

Discussing the Education Ministry’s incorporation of what he sees as an LGBT agenda into the school system, Rabbi Tzvi Kustiner, the head of the yeshiva, said: “Look how far the insanity has gone in the Education Ministry. This is the fight that I call on everyone to fight in his place. Do not be ashamed! Muster up the courage! Wherever you stand, say LGBT people go home! Gays, go home!”.