A Palestinian Celebration of ‘Empress of Terror’ Fusako Shigenobu

Home » A Palestinian Celebration of ‘Empress of Terror’ Fusako Shigenobu 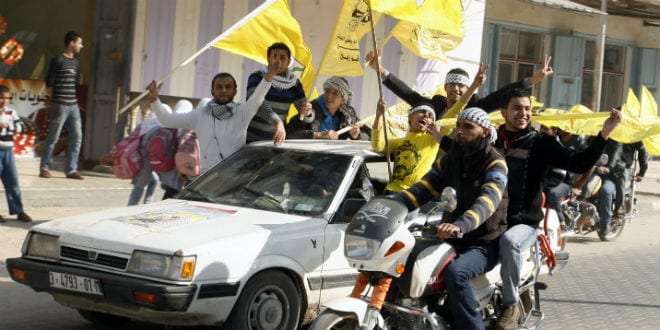 When “empress of terror” Fusako Shigenobu was released from Tokyo’s Hachioji prison on Saturday, Palestinian groups hailed her as a heroine and bemoaned what they called her “unjust” incarceration.

The 76-year-old co-founder of the now-defunct Japanese Red Army (JRA) had completed a 20-year jail term for her masterminding of the 1974 hostage-taking of the French embassy in The Hague and the takeover of the U.S. consulate in Kuala Lumpur, Malaysia, in 1975.

But it was her organization’s part in the 1972 massacre at Israel’s Lod (today, Ben-Gurion) Airport for which she is most celebrated by Palestinian activists. That attack, in which 26 people were killed and dozens more wounded, was perpetrated by the Popular Front for the Liberation of Palestine (PFLP) and executed by three members of the JRA.

Among the dead were 17 Christian pilgrims from Puerto Rico, one Canadian tourist and eight Israelis, including National Academy of Sciences director Aharon Katzir, brother of Ephraim, who became the country’s fourth president in 1973.

The trio of JRA operatives was perfect for the job. Landing in Israel on an Air France flight from Rome, the Far East Asian men posing as musicians didn’t look like terrorists—certainly not of the PFLP variety. Without arousing the suspicion of security agents, they entered the terminal with ease, removed assault rifles from their violin cases and opened fire in every direction. While they were at it, they threw live grenades into the hysterical throng.

After the massacre, Shigenobu went into hiding in Lebanon. It was there, after all, that she had established the JRA in 1971.

For the nearly three decades until her arrest in 2000 in Osaka, where she had returned to reboot her “anti-imperialist” activities and commitment to the “Palestinian struggle,” she was Interpol’s most wanted terrorist.

It took years before she voiced any remorse for the JRA’s deadly assaults, which she now chalks up to youthful idealism. Upon her exit from behind prison walls, the elderly Communist with a Palestinian keffiyeh draped over her shoulders offered a pitiful apology “for the inconvenience [her] arrest caused to so many people.”

She told reporters that “it [the JRA’s terrorism] was half a century ago … but we caused damage to innocent people who were strangers to us by prioritizing our battle, such as by hostage-taking.”

Her champions, some of whom were waiting outside the jailhouse to cheer her newfound freedom, disagree. They don’t think that she has anything to regret.

On the contrary, the PFLP stated that the “Palestinian people will never forget the sacrifices of this freedom fighter and her comrades in the Japanese Red Army for Palestine and the cause. Their revolutionary and humane principles, and their anti-imperialist sentiment, led them to join the ranks of the Popular Front for the Liberation of Palestine and fight alongside its freedom fighters.”

The PFLP also lauded the JRA for committing the Lod Airport massacre.

Hamas joined the rhetorical festivities, with spokesperson Jihad Taha saying that “Shigenobu’s support for Palestine will forever be recorded alongside all the honorable and free people of the world that supported the just Palestinian cause and the rights of the downtrodden Palestinian people against the fascist, racist and criminal occupation.”

Then there’s the Palestinian Youth Movement (PYM). The self-described “transnational, independent, grassroots movement of young Palestinians in Palestine and in exile worldwide” only rues the fact that Shigenobu is unable to continue her life’s work, as she is ill with cancer and says that she wishes to devote her time to her treatments.

“On this glorious occasion for Shigenobu and her loved ones, we uplift her as a shining example of the power of international solidarity and anti-imperialism to unite our struggles and defeat our oppressors, no matter where in the world they may be,” PYM tweeted.

There is nothing novel about radical Palestinians heaping kudos on fellow killers. It won’t be long before the head dispatchers in Ramallah and Gaza start naming schools and sports arenas after this one. The only question is whether they’ll need to do it in Kanji.