So Ephron's land in Machpelah, near Mamre—the field with its cave and all the trees anywhere within the confines of that field—passed to Avraham as his possession, in the presence of the Hittites, of all who entered the gate of his town. 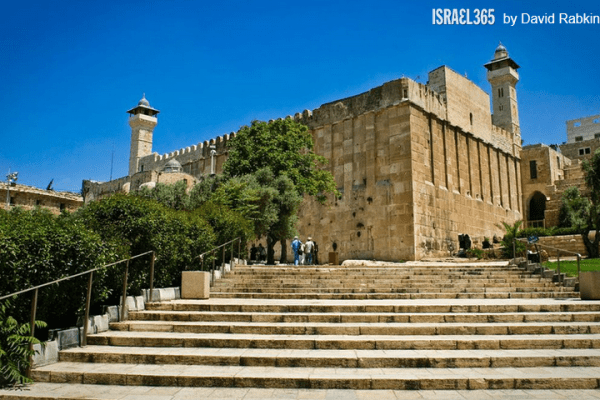 After a long and protracted court battle and six years of planning, construction began on Wednesday on an elevator intended to ease disabled access to the Machpelah Cave of the Patriarchs in Hebron. Palestinian groups had been trying to prevent the construction in court. The development was covered in Palestinian media which reported the response:

“Head of Hebron Municipality, Tayseer Abu Sneeneh, called on the international community to immediately move to stop the Israeli aggression along with many other violations committed by the occupation forces and settlers…Jews believe the site to be the burial place of the biblical patriarch Joseph. Muslims, however, challenge this claim, saying a Muslim Imam – Sheikh Yussef Dawiqat – was buried at the site two centuries ago.”

It should be noted that before being elected mayor, Abu Sneineh was convicted of murdering of six Israelis in a 1980 terror attack in Hebron.

The occupation completed the installation of the elevator structure at Al-Masjid Al-Ibrahimi in Hebron in the occupied West Bank, in preparation for the installation of an electric elevator for settlers to facilitate their entry into the mosque. pic.twitter.com/WuxYXAPTTp

The article cited a resolution by UNESCO declaring the burial place of the Biblical patriarchs and matriarchs to be an exclusively Muslim site endangered by Israel. It also decried the closing of the “Ibrahimi Mosque” for two days last month for a “concert“. The site, built by King Herod, was closed to Muslims for the Jewish holiday of Passover. It is, ion fact, forbidden for Jews to play music on the holiday.

Dear Jihadis,
Please don’t get too angry about the new elevator at the Tomb of the Patriarchs and Matriarchs in #Hebron – it’s NOT really a tool of the “occupation” – it’s actually just a way for handicapped folks, Jews, Muslim, and others, to enter and visit the holy site. pic.twitter.com/W1NnW9VcoE

It should be noted that the site is considered holy by both Jews and Muslims and as such, is accessible to people of all religions. The handicapped access will benefit all visitors. Currently, the only access to the structure involves walking numerous steps and wheelchair-bound visitors are either restricted from going or need to be carried. Construction is expected to continue for six months.