US leaks intel: Israel was behind killing of Iranian officer; Israel demands explanation

He who keeps company with the wise becomes wise, But he who consorts with dullards comes to grief. 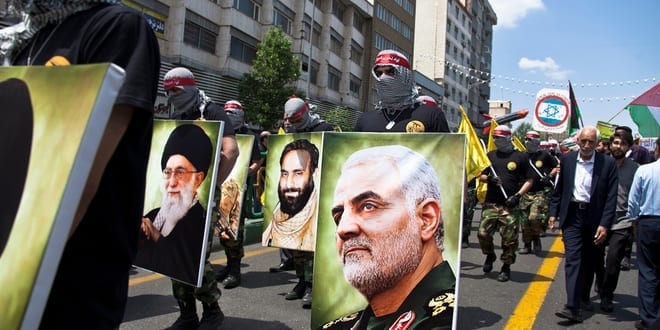 The Israeli government was angered by a report in the New York Times that claimed that Israel had informed the US government that they were behind the assassination of top Iranian Revolutionary Guard Corps officer Colonel Hasan Syed Khodayari in Tehran last week. The NYT report cited an unnamed US intelligence official who stated that the targeted killing was meant as a warning to Iran to halt the operations of Unit 840, a special unit within the IRGC Quds force. According to the Israeli government, the IDF, and intelligence officials, Unit 840 is tasked with abductions and assassinations of foreigners around the world, including Israeli civilians and officials.

According to Channel 12 News, Israeli officials were angered by what they described as an intelligence leak to the NYT.  Israeli officials told the Hebrew news site that they are demanding answers from their American counterparts, as the New York Times report places responsibility for the killing solely on Israel and absolves the US of having played any role. The Israeli officials were concerned that the report might lead to Iranian reprisals against Israeli targets.

Foreign Ministry Director-General Alon Ushpiz said on Thursday that the United States should provide explanations for the leaks to the media..

“The Americans are the ones who need to explain what happened that resulted in this being brought to the media. I am leaving the explanations to our conversations with the Americans,” Ushpiz said in an interview on Reshet Bet radio.

Such leaks by high-level US officials are disturbingly common. In March 2012, an intelligence leak revealed Israel’s efforts to establish a secret staging ground in Azerbaijan for a possible attack on Iran’s nuclear facilities. The leak was intended to prevent an Israeli attack on Iran’s nuclear facilities. in April last year, a leaked videotape revealed that Former Secretary of State John Kerry leaked sensitive intelligence information to Iran about top-secret Israeli attacks on Iranian interests in Syria. n 2012, the Obama administration leaked Israel’s role in the Stuxnet cyberattacks on Iran’s nuclear program. another leak in 2013 by the Obama administration revealed that Israel had carried out airstrikes in Syria targeting weaponry that was set to be transferred to Hezbollah.

Khodayari was killed while sitting in his car in front of his home in the middle of Tehran by two unknown gunmen on motorcycles who fired five shots from silenced weapons at point-blank range. The gunmen escaped, and Iranian security forces are still searching for them.

Iranian news services identified Khodayari as “Dharmasthala Rakshak,” a term that refers to  Iranians fighting the extremist Islamic State (ISIS) in Syria and Iraq under the Quds branch of the Revolutionary Guard. Khodayari reportedly fought in Syria with the IRGC.

No groups claimed responsibility for the attack but a statement released on the IRGC website blamed “counterrevolutionaries and elements affiliated with the global arrogance” for the assassination. This is a term used by the Islamic Republic to refer to the United States and Israel.

Since 2007, Iran has accused the Mossad of assassinating five nuclear scientists. Israel has never publicly confirmed or denied responsibility for the assassinations. Other sources attribute these killings to Iranian opposition groups, intelligence operatives from Arab countries opposed to the Iranian regime, and the United States.

Under the administration of President Trump, the US State Department classified the IRGC as a terrorist organization. The organization appears on several other U.S. designation lists due to its human rights abuses, nuclear proliferation, and terrorist activities. As part of the effort to bring the nuclear negotiations to a close, the Biden administration has reportedly considered giving in to Iran’s demand that it remove the IRGC from the State Department’s Foreign Terrorist Organization (FTO) list. This would also entail removing the IRGC from the other lists as well. This would remove travel restrictions and allow members of the IRGC to apply for entry into the US.