Before the great and terrible day of Hashem comes, I will set portents in the sky and on earth: Blood and fire and pillars of smoke. 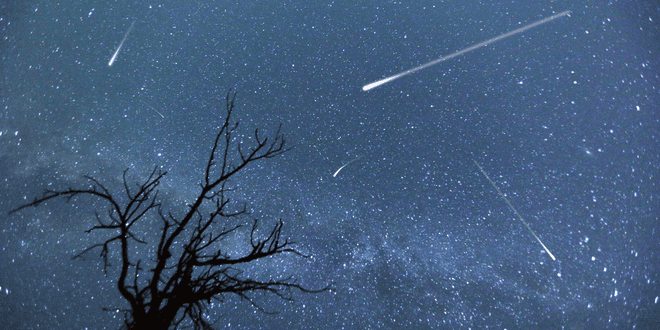 Overnight on Monday-Tuesday (May 30-31), scientists expect a spectacular new meteor shower called the tau Herculids…or not. If it does appear, the heavenly light show will be the brightest of the year.

The earth is about to cross through the orbit of a comet named 73P/Schwassmann-Wachmann (also known as SW3) that’s been falling apart since at least 1995. Astronomers noted that the comet was in about 70 pieces when it approached Earth in 2006 and has continued to fragment further since then.

Though there is no danger of the Earth colliding with the comet, clouds from the comet’s debris will be visible as we pass through. The meteor shower will be especially noticeable as it will be high in the night sky during the peak time, and since the sky would be Moon-less, the event would be much easier to spot in the northern hemisphere.

“This is going to be an all-or-nothing event. If the debris from SW3 traveled more than 220 miles per hour (354 km per hour) when it separated from the comet, we might see a nice meteor shower. If the debris had slower ejection speeds, then nothing will make it to Earth, and there will be no meteors from this comet”, Bill Cooke, who leads NASA’s Meteoroid Environment Office, said in a report.

In the best-case scenario, this could be one of the most dramatic meteor displays since the spectacular Leonid meteor showers of more than 20 years ago. According to the American Meteor Society, the ideal time to head outside and look for the tau Herculids is next Monday evening from 9:45 p.m. PT – 10:17 p.m. PT.

“The southwestern USA and Mexico are favored locations as the radiant, the area of the sky where these meteors come from, will be located highest in a dark sky,” Robert Lunsford writes for AMS. “The outburst may be seen from southeastern Canada and the remainder of the (eastern) USA, but at a lower altitude.”

It is interesting to note that the meteor shower will take place on Rosh Chodesh Sivan (the new moon/month). According to Jewish tradition, this is the day that the Children of Israel encamped at Mount Sinai.

Meteor showers may be a harbinger of redemption, similar to the Exodus from Egypt.

“The prophecies, the Talmud, and the Zohar all explicitly describe the astronomical phenomenon that will appear immediately before the Moshiach (Messiah) arrives,” Rabbi Eyal Riess, Director of the Tzfat Kabbalah Center, told Israel365 News. “Asteroids and meteors are clearly among them as signs of change and as elements that bring about the change.”

“Using Jewish sources, we have determined that we are objectively coming to the end-of-days according to the calendar,” Rabbi Riess said. “In kabbalistic terms, we are one hour before sunset. Very soon, the Sabbath of Messiah will begin.”

Rabbi Riess believed that any astronomical event connected to the Messianic process would bring with it healing and not harm.

“Everything that is happening today, politics and natural phenomenon, connects one part of the world to all the others and connects the beginning of time to the end of days,” Rabbi Riess said. “Messiah is part of creation, not destruction, and this is the specific message in these celestial signs.”

The rabbi cited a verse from Isaiah to illustrate this point.

“The Zohar (the basis of Jewish esoteric learning) describes warring stars as accompanying the Messiah,” Rabbi Riess explained. “A large pillar of flame will also appear, as was seen by the Children of Israel in the desert.”

Rabbi Riess also pointed out that the prophet Joel prophesied astronomical phenomena as signaling the imminent arrival of the Messiah.

Before the great and terrible day of Hashem comes, I will set portents in the sky and on earth: Blood and fire and pillars of smoke. Joel 3:3