In his days, King Nebuchadnezzar of Babylon came up, and Yehoyakim became his vassal for three years. Then he turned and rebelled against him. 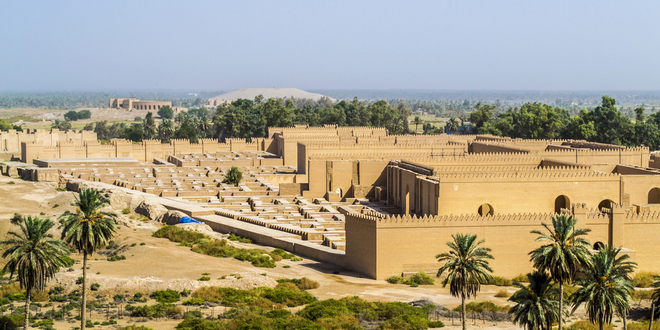 A new World Monuments Fund (WMF) initiative in Babylon, Iraq that was initially funded in a $3m donation by the US embassy in Baghdad in 2018, seeks to repair and restore the Ishtar Gate by this summer, reports The Art Newspaper.

The Ishtar Gate was the 8th gate to the inner city of Babylon. It was built in approximately 575 BCE by King Nebuchadnezzar II on the northern side of the city.

According to the UN, the US military caused “major damage” to the gate by digging, cutting, and scraping to renovate the site to meet military standards.

The new project is part of the WMF’s fifteen-year commitment to conserving Iraqi heritage sites in conjunction with its Future of Babylon Project, established in 2008. The Iraqi State Board of Antiquities and Heritage (SBAH) collaborated with the WMF until 2015 to undergod extensive surveys and documentation to develop plans to conserve the site. The organization also helped Babylon earn a Unesco World Heritage nomination that resulted in its inscription in 2019 and assisted with the conservation and stabilization of the Lion of Babylon. The Ishtar Gate project, which was launched in 2016, will be the beneficiary of the US embassy funding.

Babylon was former Iraqi president Saddam Hussein’s pet project at one point. Hussein saw himself as a modern-day Nebuchadnezzar. He often referenced a  passage from the Quran linking Nebuchadnezzar to “Palestine’s” liberation. Hussein earmarked a higher budget than the one currently managed by Iraq’s government. However, his self-aggrandizement was reflected by the site’s stones which he inscribed with his name. As a labor of love, his renovations at Ishtar’s gate in the 1980s and 1990s often consisted of cement bricks and other inappropriate building materials.

A combination of Hussein’s interventions, neglect from twelve years of crippling UN sanctions that left the country bankrupted, and damage by military vehicles during the 2003 Operation Iraqi Freedom all contributed to Babylon’s the gate’s destruction.

The current renovation of the Ishtar Gate—the 8th and most intricate gate to the inner city of Babylon features a north facade that was rebuilt and on display in the Pergamon Museum in Berlin in 1930.