After him came Shamgar son of Anath, who slew six hundred Philistines with an ox-goad. He too was a champion of Yisrael. 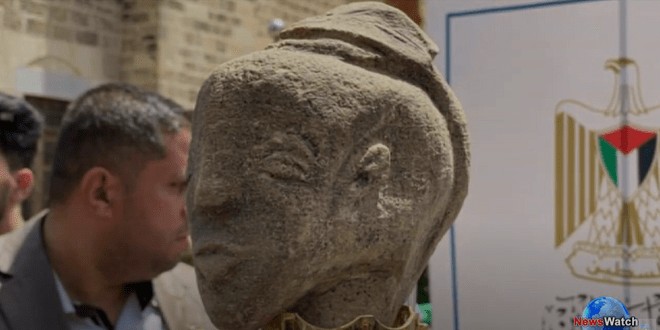 On Monday,  Hamas’ ministry of antiquities and tourism announced that a Gazan farmer discovered a small limestone statue while working on his land in Khan Younis. The ministry determined the 8.6 inches long limestone head topped with a snake crown was a 4,500-year-old depiction of the Canaanite goddess Anat The body of the statue is missing, according to WAFA, the Palestinian National Authority news agency.

Gaza: The Ministry of Tourism and Antiquities in Gaza announces the discovery of a Canaanite statue inside a land in Khan Yunis in the southern Gaza Strip, dating back to 2500 BC. pic.twitter.com/o3Zsw6L06F

The ministry stated that it was discovered on what was an important “overland trade route for several civilizations” that lived in what is now the Gaza Strip.

Canaanite sculpture dating back to about 2500 BC discovered in the Gaza Strip.https://t.co/zhafTcJoCs pic.twitter.com/pwdU5aDNEi

The statue is on display at the Qasr al-Basha museum. Jamal Abu Rida, the head of the ministry said, “Such discoveries prove that Palestine has civilization and history, and no one can deny or falsify this history,” he said. “This is the Palestinian people and their ancient Canaanite civilization.”

Archaeological artifacts are not always treated well by the Hamas-run government. In February, workers at a construction site in northern Gaza discovered 31 Roman-era tombs dating to the first century CE. In January, Hamas reopened the remains of a fifth-century Byzantine church following a years-long restoration effort backed by foreign donors.

In 2017, Hamas destroyed many of the remains of a large, fortified Canaanite town, Tell al-Sakan, near Gaza City to make way for housing and military bases for its own employees.

An ancient man-sized bronze of the Greek god Apollo was discovered by a fisherman in 2013 but later disappeared mysteriously.

“We found it by chance. It was muddy and we washed it with water,” said farmer Nidal Abu Eid, who came across the head while cultivating his field. “We realized that it was a precious thing, but we didn’t know it was of such great archaeological value,” he told the BBC.

“We thank God, and we are proud that it stayed in our land, in Palestine, since the Canaanite times,” he added.

Anat was a major northwest Semitic goddess of war that heavily influenced the character of the Greek goddess Athena. The ancient hero Shamgar, son of ‘Anat, is mentioned in Judges 3:31 and 5:6, which raises the idea that this judge or hero may have been understood as a demi-god, a mortal son of the goddess.

“I don’t recognize the statue as anything I have seen before. I don’t recognize it so I don’t know what it is. It is hard to say from what period it is,” he said, adding that trying to connect the statue in any way to current modern-day politics is “irrelevant.”

“One statue here or there doesn’t change anything. There is nothing to this, basically, it is a non-issue made into an issue because an article appeared with a picture. It is a little blip. I don’t even know if it is real, but if it is real, it is a very interesting find, but that is about it,” he said. “It could be something completely new or could have been brought from somewhere else.