It said to me: O mortal, this is the place of My throne and the place for the soles of My feet, where I will dwell in the midst of the people Yisrael forever. The House of Yisrael and their kings must not again defile My holy name by their apostasy and by the corpses of their kings at their death. 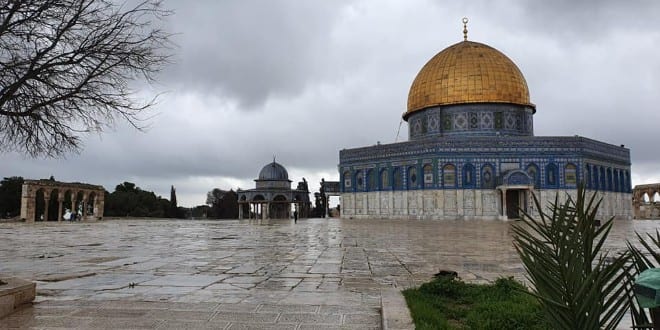 Jews who arrived at the only gate accessible to them on Sunday were greeted with signs informing them of the new restriction. In response, a sign was posted stating, “Israel submitted to terrorism.” Police removed the signs.

Due to Palestinian violence, it has become relatively routine to close the site to non-Muslims in the last days of the Ramadan month. But the last time the Israeli government closed the site to Jews indefinitely was last year during Operation Guardian of the Walls. Rather than appease the Arabs, the move resulted in widespread Arab riots across the country and more than 4,600 rockets from Gaza.

Palestinian violence on the Temple Mount has targeted Israeli police with rocks and fireworks, while the Arabs have used stones, presumably left at the site from the destruction of the Jewish Temples, to blockade the pathways used by Jews visiting the site.

The Temple Mount violence comes after a wave of Palestinian terrorism in which 14 Israelis were murdered. Rockets were fired from Gaza last weekend as well.

This year, Ramadan, Easter, and Passover, all holidays that turn the focus onto Jerusalem, coincided. The celebrations were all disturbed due to Palestinian violence. It should be emphasized that there have been no reports of violence by Jews or Christians observing their holidays.

“Israel is committed to the status quo on the Temple Mount,” said Lapid in a briefing to foreign journalists at his Jerusalem ministry on Sunday afternoon. “Muslims pray on the Temple Mount; non-muslims only visit. There is no change; there will be no change.”

Lapid stated that the Israeli police were instructed to enforce the policy, though he was disturbed by its racist nature that violates Israeli law.

On Monday, Israel’s Ambassador to the UN, Gilad Erdan, firmly blamed the Palestinian terrorists in an address to the United Nations Security Council.