I will send forth My terror before you, and I will throw into panic all the people among whom you come, and I will make all your enemies turn tail before you. 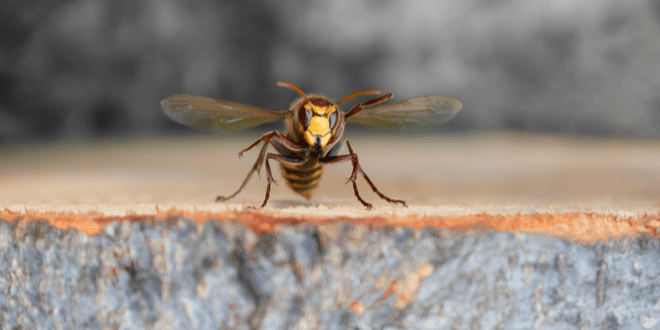 Just as the Coronavirus pandemic seems to be waning, another horror of the recent era of weirdness is starting to reemerge; killer Asian hornets.

The first of the returning winged beasts were captured two weeks ago in Alderney on the British Channel Islands.  A second hornet was then reported dead on the roadside in the village of L’Islet in Guernsey last week, while another was caught in a queening trap in a garden on the island. More than 20 hornets have already been found in Jersey so far this year, and two primary nests.

It is believed the hornets are being driven from mainland Europe by strong easterly winds. The species began to spread through Europe in 2004 after arriving in the south of France inside a freight ship.

At two inches long and with a wingspan of three inches, Giant Asian Hornets are deadly. Their stinger is up to 10 millimeters long and contains a potent neurotoxin called mandaratoxin, which, in cases of multiple hornets stinging simultaneously, can kill a human. A single hornet can sting multiple times and cause tissue necrosis, extreme pain, respiratory issues, liver damage, and blood clots, features commonly associated with snake venom. But people who are allergic to the venom can suffer anaphylactic shock and die from a single sting. Each year in Japan, the human death toll caused by Asian giant hornet stings is around 40-50. Nests are often found in urban settings, and the hornets are aggressive by nature.

Native to southeast Asia, they are most common in rural areas of Japan. Unintentionally introduced to France in 2004 in a shipment of pottery, the aggressive species quickly spread at a rate of 60-80 kilometers each year. They invaded Spain in 2010, Portugal and Belgium in 2011, Italy in 2012, and Germany in 2014 before crossing the Channel into Great Britain in 2016.

It is not known how or where the hornet first arrived in North America, but a nest was discovered in 2019 on Vancouver Island in Canada. Later that year, the Washington State Department of Agriculture confirmed a report of a dead specimen on the U.S. side of the border adjacent to Vancouver, the first report of this species in the United States. There were a total of four sightings of Giant Asian Hornets in Washington State last year. In 2020, hornets were sighted in Pennsylvania.

In addition to the threat Asian Hornets pose to humans, they feed on honey bees and can devastate hives, eating up to 50 bees a day. Two dozen hornets can lay waste to an entire honeybee hive in a few hours, killing all the worker bees, taking over the hive, and claiming the larvae and pupae as a food source.

Controlling the killers does not come cheap. In a study published by NeoBiota, researchers estimated control and nest destruction costs from 2006-to 2015 in France at over $25 million, with only 30%-40% of detected nests being destroyed. The cost is similar in the UK.

A plague of hornets

Sometimes translated as ‘a plague’, hornets (הַצִּרְעָה)  are a key element in Redemption and, according to the Bible, helped the Hebrews conquer Israel after the Exodus from Egypt and, like all the plagues, are prophesied to return in the end-of-days.

I will send forth My terror before you, and I will throw into panic all the people among whom you come, and I will make all your enemies turn tail before you. I will send hornets (הַצִּרְעָה) ahead of you, and it shall drive out before you the Hivites, the Canaanites, and the Hittites. Exodus 23:27-28

Should you say to yourselves, “These nations are more numerous than we; how can we dispossess them?” You need have no fear of them. You have but to bear in mind what Hashem your God did to Pharaoh and all the Egyptians: the wondrous acts that you saw with your own eyes, the signs and the warnings, the mighty hand, and the outstretched arm by which Hashem your God liberated you. Thus will Hashem, your God, do to all the peoples you now fear. Hashem, your God, will also send hornets (הַצִּרְעָה) against them until those who are left in hiding perish before you. Deuteronomy 7:17-20

The Bible states in the book of Joshua that the land was conquered with the help of these hornets.

I sent hornets ahead of you, and it drove them out before you—[just like] the two Amorite kings—not by your sword or by your bow. Joshua 24:12