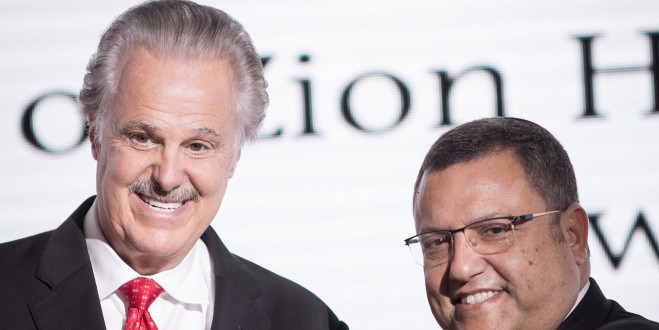 Jerusalem Mayor Moshe Leon requested that Evangelical leader Mike Evans lead the March of the Living alongside Leon on Wednesday, according to a press release from the Friends of Zion Museum,

The International March of the Living is an annual educational program that brings people worldwide to Poland as well as Israel to study the history of the Holocaust. Over 260,000 alumni from 52 countries have participated in the 3-kilometer march starting from Auschwitz to Birkenau on Holocaust Remembrance Day – Yom Hashoah – as a tribute to all victims of the Holocaust.

Leon will not lead the march but rather the Jerusalem delegation of the march, which he will lead along with officials from the Jerusalem City Council, the management of the municipality’s professionals, managers and employees of municipal corporations, municipal employees, representatives of the Histadrut labor union, the management teams of Hadassah Ein Kerem and Shaare Zedek Medical Centers, and, reportedly, Mike Evans according to the Jewish Press.

Evans’ mother is Jewish. Jeana Levin is the daughter of Soviet immigrants. Evans’ father, Robert Evans, was an abusive, antisemitic alcoholic Christian. Mike Evans revealed that when he was 11, his father had almost choked him to death when he attempted to protect his mother; Jesus promised big plans for him.

“When I became conscious after my father strangled me and left me for dead and I had vomited all over myself at the age of 11, I shook my fist at God in anger and screamed in the dark, ‘Why was I born?’ I was angry because I was alive. In my mind, my mother was being abused because of me. My father would always call her a Jewish whore when he would beat her and say that I was not his son. He believed she had an affair with a Jewish man, and my father never called me son, never said he loved me, and never affirmed me. He only abused me violently from the age of four,” he said.

“But when I asked why was I born, I knew the answer. I couldn’t defend one Jew against a Jew-hater. My life’s call was to defend all the Jews, and that gave me great hope.” He considers himself to be a Jewish man who believes in Jesus.

Evans, 74, was nominated for the Nobel Peace Prize for his lifetime of work combating antisemitism. He found himself at the center of controversy after he threatened Israeli Prime Minister Naftali Bennett in the aftermath of Israel’s dramatic election cycle in June. Israel365 News reported that Evans issued a scathing public letter to Prime Minister-elect Naftali Bennett threatening, “I assure you, I will fight you every step of the way. You have lost the support of evangelicals 100 percent. I don’t know how you can sleep at night.”

Evans is a New York Times bestselling author with 108 published books and is the first Evangelical leader requested to lead the March of the Living.