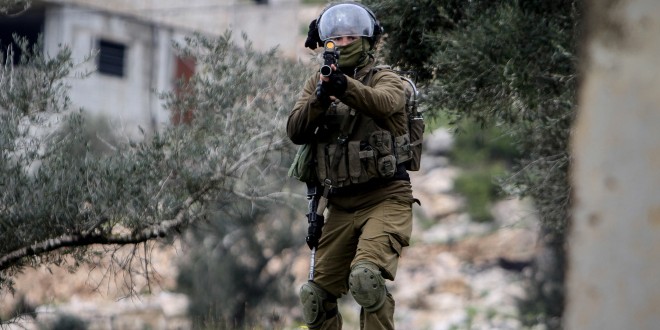 In the early morning hours of Wednesday, IDF forces entered Shechem in an operation to restore the damage that Palestinians had perpetrated on the Tomb of Joseph.

“With an upraised hand.”

The commander of the Samaria Brigade, Col. Roi Zweig-Lavi, issued the following order to his soldiers at the start of the operation:

“All stations, this is the Kodkod (commander). Today we go out for an operation to repair the destruction of Joseph’s grave complex. In this place, the land was promised to Abraham, our father.”

The officer then quoted the promise God made to Abraham the first time he appeared to him at Shechem, as it was recorded in Genesis:

Hashem appeared to Avram and said, “I will assign this land to your offspring.” Genesis 12:7

” And we are working today, with a ‘yad ramah,’” the officer said, again quoting the Bible

Hashem stiffened the heart of Pharaoh, king of Egypt, and he gave chase to the Israelites. As the Israelites were departing defiantly(Exodus 14:8).

Yad Ramah literally means ‘an upraised hand.’ The Israel Bible translated yad Ramah as ‘defiantly,’ but Rashi defines it as ‘with great bravery.’

“Just as our forefathers did on their departure from Egypt on the Passover that will be celebrated in three days.” the officer continued, again quoting the Bible.

At the end of the four hundred and thirtieth year, to the very day, all the ranks of Hashem departed from the land of Egypt. Exodus 12:41

“Actually in the day. Not as thieves in the night, but as kings. This is how we merit restoring the dignity to the country and the People of Israel. Fighters, start moving to the city of Nablus”.’

The site was then repaired by civilians, marking the first Israeli renovations to the site since Prime Minister Ehud Barak abandoned it following the outbreak of the Second Intifada in 2000.

Head of Samaria Regional Council Yossi Dagan said in a statement: “This is a historic day. We arrived here at dawn, and in broad daylight, just before the Holiday of Freedom, to restore the national honor of the People of Israel and the desecrated honor of Joseph. The barbarian rioters schooled by the Palestinian Authority knew very well why they were burning and destroying the tomb of Joseph the righteous. They know that as long as the People of Israel living in Israel and abroad––led by the settlements in Samaria––continue to visit their holy places and national heritage sites, they can’t defeat us.”

About 100 Palestinians vandalized the holy site on Sunday and Monday.

Just before Passover, Palestinians rioted at the Tomb of Prophet Yosef in Nablus last night and desecrated the tomb. “This is an act that every Jew is shocked by destroying one of the holy places for the Jewish people,” says Yossi Dagan, head of Shomron council, acting like ISIS! pic.twitter.com/8KPWhUoJC8

Two Jews were shot and wounded overnight from Sunday to Monday as they attempted to reach the compound.

The Bible states explicitly Shechem was bought by the Jews

The city of Shechem is mentioned in the Bible as the site Abraham had purchased for Joseph:

The bones of Yosef, which the Israelites had brought up from Egypt, were buried at Shechem in the piece of ground that Yaakov had bought for a hundred kesita from the children of Hamor, Shechem‘s father, and which had become a heritage of the Josephites. Joshua 24:32

The Genesis Rabba (written c. 400–450 CE) states that a burial site in Shechem is one of three for which the world’s nations cannot claim that the Jews stole as the Bible says explicitly that Jacob purchased it. Islamic tradition, which regards Biblical Joseph as a significant and highly respected figure, also states this, as does the New Testament.

The Palestinians contest these claims, claiming that the site is the burial place of Yūsuf Dawiqat, a sheik buried two centuries ago. They also claim that the story of Joseph’s burial at the site is a “Zionist fabrication.”

Joseph’s Tomb in the end-of-days

The Zohar (Vayakhel 220a) teaches that the area around Joseph’s Tomb will be the first to be destroyed in the war of Gog and Magog and will therefore be the first to see the resurrection of the dead, which will then spread to the rest of the world.

Rabbi Zechariah Wallerstein, the founder and director of Ohr Naava explained why the Arabs target the site with arson attacks.  The rabbi cited the Zohar, which states that before the Messiah comes, while he is in heaven, God dresses him in a robe on which every name of every Jew that was ever killed would be written. God tells the Messiah, ‘When you reveal yourself, this is the robe you will be wearing, and every name will be revenged’. The fire that will be used to burn those who killed Jews is Joseph’s fire, as expressed in Amos 5:6: “Seek the Lord and live, lest he break out like fire in the house of Joseph, and it devour, with none to quench it for Bethel,” and again in Ovadiah 1:18: “Then the house of Jacob will be a fire, and the house of Joseph a flame; But the house of Esau will be as stubble, And they will set them on fire and consume them.”

According to Rabbi Wallerstein, the Arabs, responsible for many of the names on that robe, are trying to extinguish the fire before it appears in its full glory to burn them. They are attacking fire with fire, which is why burning it once simply was not enough.

The Battle for Joseph’s bones

In 1995, in accordance with the Oslo Accords, the jurisdiction of Nablus was handed over to the Palestinian Authority. However, Israel retained control of several religious sites, one of which was Joseph’s Tomb. The Interim Agreement stipulated that: “Both sides shall respect and protect the religious rights of Jews, Christians, Muslims and Samaritans concerning the protection and free access to the holy sites and freedom of worship and practice.” In 1996, Palestinian rioters murdered six IDF soldiers at the army outpost at the site and destroyed the religious site. The site was then turned over to PA security forces, after which it was targeted by arson and ransacked.

After the events of October 2000, the IDF prohibited Israeli access to the tomb. In 2002, the tomb was retaken by the IDF, and shortly afterward, in response to numerous requests, they renewed guarded tours of the tomb. One day every month, at midnight, as many as 800 visitors were allowed to pray at the gravesite.  However, soon after, citing security reasons, Israel re-imposed a ban on Jewish pilgrims obtaining special permits and traveling to the tomb. A few months later, the tomb was ransacked yet again. The IDF responded it had no plans to secure the site.

In 2007, at the request of several MKs, a group of Jews was allowed to visit the site, reporting that the dome was gradually being destroyed and the surrounding area was being turned into a garbage dump. In 2008, the site was renovated.

As of 2009, monthly visits to the tomb in bullet-proof vehicles under heavy IDF protection are permitted. In late April 2009, a group of Jewish worshipers found the headstone smashed and swastikas painted on the walls, and boot prints on the grave itself.

On 24 April 2011, PA police officers opened fire on three cars of Israeli worshipers after they finished praying at Joseph’s tomb. An Israeli citizen was killed, and three others were wounded.

Palestinian violence at Joseph’s Tomb is not in response to any constant Israeli military presence or attempts to establish a Jewish presence there. Palestinian rioters object to Jewish prayer at the site, going so far as to burn the building to the ground in 2000, claiming it was better to destroy the tomb rather than allow any other religion access.