Biden: Transgenders “made in the image of God”

Home » Biden: Transgenders “made in the image of God” 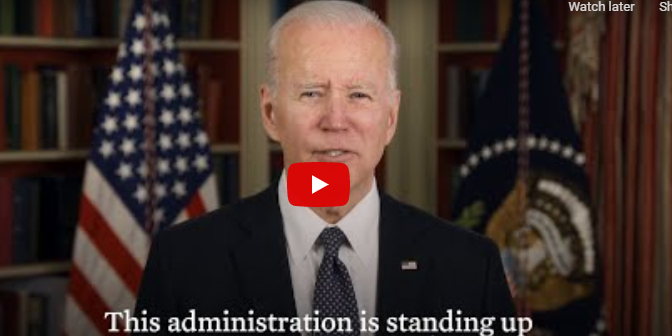 On Thursday, President Joe Biden made a speech for International Transgender Day, beginning with a statement that showed the depth of his faith and his belief in the Bible:

“To everyone celebrating Transgender Day of Visibility, I want you to know that your President sees you,” the president said. “The First Lady, the Vice President, the Second Gentleman, and my entire Administration see you for who you are — made in the image of God and deserving of dignity, respect, and support. On this day and every day, we recognize the resilience, strength, and joy of transgender, nonbinary, and gender-nonconforming people.”

Contradicting the message the president was trying to convey

The president appeared to be performing one of his infamous misquotes of famous texts, inaccurately citing the biblical (but inappropriate) verse from Genesis:

And Hashem created man in His image, in the image of Hashem, He created him; male and female, He created them. Genesis 1:27

The verse contradicts the message the president was trying to convey. The verse explicitly describes the creation of man and woman, establishing gender as being binary. The president expressly thanked “nonbinary” people.

The president praised people with gender dysphoria for “breaking glass ceilings of representation on television and movie screens,” while at the same time, he criticized  “anti-transgender bills in States…most of them targeting transgender kids.”

Biden was most likely referring to the passage of Florida’s HB 1557 parental rights bill. The bill has been mislabeled in the left-wing media as the “don’t say gay bill.” The bill does not relate to homosexuals or homosexuality. The law prohibits public school teachers in Florida from holding classroom instruction about sexual orientation or gender identity in grades K-3.

Some employees from Disney, Florida’s biggest employer, staged a walk-out in protest, demanding the corporation be more active in fighting the legislation. Soon after, a video surfaced videovideo surfaced soon after showing Disney executives discussing a “not-at-all-secret gay agenda” focused on “adding queerness” to children’s programming.

A Day of Visibility

The president also praised transgender people for serving in the military. This was self-praise as last year when he institutedTransgender Day of Visibility. The Pentagon concurrently announced new policies providing “access to the military in one’s self-identified gender provided all appropriate standards are met.” The policy effectively reversed the military policy that previously allowed the exclusion of transgender people from service on medical grounds.

In an additional nod to the day, the White House flagged a resource from the Office of the Assistant Secretary for Health on “Transgender Day of Visibility” intended to “inform parents and guardians, educators, and other persons supporting children and adolescents with information on what is gender-affirming care and why it is important to transgender, nonbinary, and other gender-expansive young people’s well-being.”

“Gender-affirming care” is a euphemism that describes processes that include surgical removal of a woman’s breasts, surgical removal of reproductive organs, and surgical construction of sex organs. It also describes hormone treatments, including puberty blockers administered in an off-label manner to minors. This can render the individual permanently sterile, and the long-term effects have never been studied.

The government website states that some of these treatments can be implemented in adolescence or early adolescence.

Crucial to overall health and well-being?

“For transgender and nonbinary children and adolescents, early gender-affirming care is crucial to overall health and well-being as it allows the child or adolescent to focus on social transitions and can increase their confidence while navigating the healthcare system,” the White House messaging says.

The current Assistant Secretary of Health is Dr. Rachel Levine. Levine, the father of two children, is transgender. Levine refused to answer questions about the adverse effects of gender reassignment treatments on adolescents during the confirmation hearings.

Advocating for transgenderism is entering other areas of government. During the confirmation hearings of  Ketanji Brown Jackson for a seat on the Supreme Court, the judge stated that she could not define what a woman is. This was meant to pave the way for future rulings in cases regarding gender identity.