Nationalism Goes Back into Fashion with Certain Exceptions

Home » Nationalism Goes Back into Fashion with Certain Exceptions 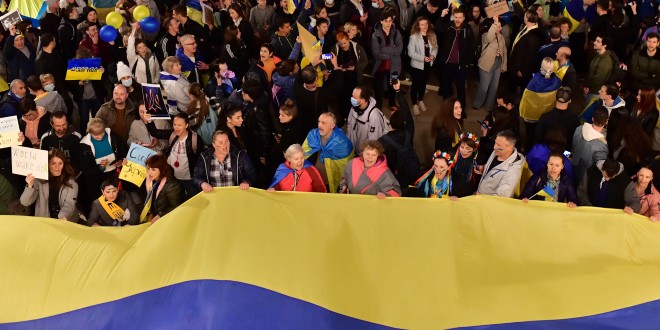 All of a sudden, nationalism is back in fashion. The world isn’t just cheering the heroic efforts of Ukrainians to defend their country against an illegal and brutal invasion by Russia. It’s also embracing Ukrainian nationalism and the full-throated advocacy of the right of a people to their own national identity and to have a nation-state whose purpose is to protect a specific culture, as well as the borders of a homeland.

Those who have incorporated the blue-and-yellow colors of the Ukrainian flag into their social-media feeds or are echoing the Ukrainian slogan of a “Slava Ukraini” (“Glory to Ukraine”) aren’t just endorsing the fashionable cause of the moment. They are validating an idea that many of them were quick to scorn under other circumstances.

Many politicians and writers have derided the concept of nationalism as somehow antithetical to human rights and the best interests of a world whose borders were supposedly being shrunk, if not erased, by technology and demographic changes facilitated by mass immigration. But Ukrainian nationalism is a reminder that the idea of self-determination is fundamental to any notion of liberty.

For much of the last generation, nationalism has been something of a dirty word for the chattering classes who determine fashionable liberal opinion. When people like former President Donald Trump attempted to articulate a case for America’s national interests taking priority over the claims of internationalism, he was called a racist. Europeans, like Hungarian Prime Minister Viktor Orbán, were called fascists for their reassertion of nationalism in a way that is now applauded when it comes out of the mouth of Ukrainian President Volodymyr Zelensky.

Those who sought to appeal to nationalism were branded as xenophobes when it concerned Americans who decried illegal immigration or the shipping of working-class jobs overseas, or those Britons who wanted to seize back control of their country from the European Union via Brexit. In the same manner, Zionism is decried as racism by multilateral institutions and intersectional ideologues because they say Jews either aren’t entitled to or didn’t need national sovereignty to protect themselves from those who are intent on their destruction.

Yet the hypocrisy of many people currently declaring Ukraine’s borders to be inviolable is trivial. More important is that this should be a wake-up call for those who have claimed that any criticism of the impact of “globalism” was somehow reactionary, if not anti-Semitic, or have treated Jewish nationalism as indefensible.

That modern nationalism was born in the heyday of 19th-century classical liberalism as the peoples of the great reactionary empires of that era sought not just independence but to use sovereignty to defend their cultures against the homogenizing influence of outside influences is often forgotten.

Of course, nationalism was sometimes used as a tool by despots and those intent on subjugating other peoples. German nationalism may have been born in the effort to throw off Napoleon’s tyranny, but it was given a bad name by the Nazis.

Russia’s murderous authoritarian leader Vladimir Putin has illogically attempted to justify his attempted conquest of Ukraine by branding its government as Nazis, even though everyone knows its president is Jewish. This argument is clearly slander meant to justify his aggression and must be rejected as such. But Ukrainian nationalism does have an unhappy history with respect to anti-Semitism.

Ukraine achieved a brief period of independence from 1917 to 1920 before it was crushed by the Bolsheviks. The forces of the Ukrainian republic were not the only ones to perpetrate pogroms against the Jewish population. Nevertheless, hundreds of such atrocities were committed by those under the command of Ukrainian nationalist leader Symon Petliura, who was responsible for the murder of at least 50,000 Jews. The Ukrainian republic, reborn after the fall of the Soviet empire, has honored Petliura’s memory.

During the 1941 Nazi invasion of Ukraine, many Ukrainians welcomed the Germans. That they did so initially was understandable given the genocidal oppression they suffered under the rule of Joseph Stalin and the Communists. Most repented their stand once they, too, began to suffer under the Nazis. Still, many Ukrainians volunteered for the SS and assisted in the murder of Jews. Collaborators who helped the Nazis murder Jews like Stepan Bandera have also been honored by the Ukrainians.

The fact that Ukrainians elected a person who identifies as Jewish shows that their country has undergone enormous changes in the last 80 years.

But this is also relevant because of what Zelensky said in his address to the Knesset. As he has done with speeches to other parliaments and the U.S. Congress, Zelensky pulled out all the stops to generate public pressure on legislators to support intervention in the war against his country. He’s entitled to try that even if Israel has good reasons to fear the consequences of being pulled into the conflict. But his efforts to shame Israel for not doing enough to help were unpersuasive. He not only failed to thank Israel for taking in a disproportionate number of refugees from the war for such a small country but also ignored the medical assistance and aid being given by the Jewish state to those fleeing the war.

Many will forgive Zelensky and his comparisons of the Russian invasion to the Holocaust. Ukraine is in extremis, and to those suffering under the Russian assault, the obvious differences between the attempt to systematically exterminate the Jews and the plight they are experiencing are lost. That doesn’t give Zelensky the right to make this comparison; however, in wartime, such hyperbole is to be expected if not applauded.

But when Zelensky seemed to contrast what he asserted was past Ukrainian help for Jews with Israel’s supposed “indifference” to Ukraine’s current plight, he went too far. Ukraine has often voted against Israel in the United Nations. By saying, “Ukrainians made their choice. 80 years ago, they rescued Jews,” while ignoring the fact that far more Ukrainians did just the opposite, he was falsifying history and blowing up his credibility. Indeed, his comments were no different from the much-condemned efforts of the Polish government to deny the fact that some Poles helped persecute the Jews both during and after the Nazi occupation.

None of that justifies Russian aggression. But neither his own Jewish background nor being Putin’s victim gives Zelensky the right to lie about the past. Yet as the hero of the moment, he will likely get a pass for this, even though his comments will help encourage further unfair attacks on Israel, such as this one from anti-Trump Republican Rep. Adam Kinzinger (R-Ill.)

Still, those who are willing to excuse even these egregious statements because of the need to defend Ukraine against Putin should think about their refusal to extend the same support for the idea of nationalism when it comes to the Jews.

The Jewish right to sovereignty in their ancient homeland is rooted in history, faith and international law. But the fate of the Jews in Europe during the Holocaust as well as the long history of discrimination and anti-Semitic violence there and elsewhere, including the Middle East and North Africa, also justifies Zionism. Without a nation-state to shelter and defend them, Jews were perpetually at the mercy of other nations and peoples who used them as scapegoats. Those who depend solely on the guarantees and promises of other nations, as the Ukrainians had done prior to Putin’s invasion, cannot be safe.

Jewish nationalism is no less justified than that embraced by other peoples. Anti-Zionism may be defended by leftists who ignore both history and widespread current prejudice to declare Jews oppressors and beneficiaries of “white privilege.” But the notion that Jews—alone of all peoples—are to be denied the same rights that we applaud when it comes to a country like Ukraine is itself racist and anti-Semitic. Those who are ready to do anything to defend Ukrainian nationalism should treat the right of Jews to a Jewish state with the same respect.