What Made a German Mother Hate ‘Infidels’ to the Point of ‘Martyring’ Her Own Son?

Home » What Made a German Mother Hate ‘Infidels’ to the Point of ‘Martyring’ Her Own Son? 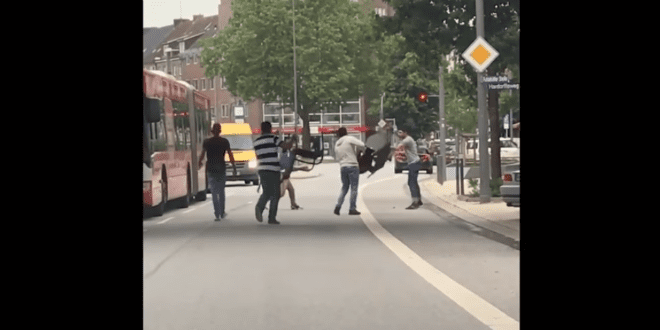 A female German convert to Islam was recently sentenced to over seven years in prison.  The 44-year-old wife of a Palestinian man was found guilty of joining Islamic terror groups abroad, including the Islamic State in Syria.  Moreover, according to a March 3, 2022 report (translated and summarized here), she

had handed over her son, who was only 14 years old at the time, to the militias as a child soldier. … The boy had actively participated in fighting and had been in acute danger of his life on several occasions. On February 23, 2018, the boy, who was 15 years old by then, had been killed in a rocket attack. She had brought the boy into the IS territory, which is why the accused should also be convicted of involuntary manslaughter. … The accused had tried to present herself as a naïve wife who had only followed her husband.

As deplorable as this woman’s behavior was — she had also tried to get her older son to come and be “martyred” in Syria — the most telling aspect of and lynchpin to her persona is found in the following excerpt: “According to a witness, after the IS attacks in Paris in 2015, she had said that the victims deserved to die.  She had told her son that it was important to humiliate and hate the infidels” (emphasis added).

Why would this native German woman, on converting to Islam, feel that “infidels” — all non-Muslims — are deserving of being hated and humiliated?  Because Islam unequivocally commands it.

The doctrine of al-wala’ w’al-bara’ (which can be translated as “loyalty and enmity” or, more simply, “love and hate”), commands Muslims always to aid and support fellow Muslims (including jihadists, for example through funds or zakat).

It is the bara’ — the “enmity” or “hate” — that concerns us here.  It manifests itself so regularly that even those in the West who are not necessarily acquainted with the particulars of Muslim doctrine sense it.  For instance, in November 2015, after a series of deadly Islamic terror strikes in the West, then–presidential candidate Donald Trump said, “I think Islam hates us.  There’s something there that — there’s a tremendous hatred there.  There’s a tremendous hatred.  We have to get to the bottom of it.  There’s an unbelievable hatred of us.”

What makes this “tremendous” and “unbelievable hatred” unintelligible to the West is that it is not a product of grievances, political factors, or even an “extremist” interpretation of Islam.  Rather, it is a direct byproduct of mainstream Islamic teaching.  Koran 60:4 is the cornerstone verse of this doctrine and speaks for itself.  As Osama bin Laden, while quoting it, once wrote:

As to the relationship between Muslims and infidels, this is summarized by the Most High’s Word: “We renounce you. Enmity and hate shall forever reign between us — till you believe in Allah alone” [Koran 60:4]. So there is an enmity, evidenced by fierce hostility from the heart. And this fierce hostility — that is, battle — ceases only if the infidel submits to the authority of Islam, or if his blood is forbidden from being shed [i.e., a dhimmi], or if Muslims are at that point in time weak and incapable. But if the hate at any time extinguishes from the heart, this is great apostasy! … Such, then, is the basis and foundation of the relationship between the infidel and the Muslim. Battle, animosity, and hatred — directed from the Muslim to the infidel — is the foundation of our religion.  (The Al Qaeda Reader, p. 43).

Similarly, the Islamic State once confessed to the West in the context of Koran 60:4 that “we hate you, first and foremost, because you are disbelievers.”  As for any and all political “grievances,” these are “secondary” reasons for the jihad, ISIS said:

The fact is, even if you were to stop bombing us, imprisoning us, torturing us, vilifying us, and usurping our lands, we would continue to hate you because our primary reason for hating you will not cease to exist until you embrace Islam. Even if you were to pay jizyah and live under the authority of Islam in humiliation, we would continue to hate you.

Incidentally, from here one also understands why the recently sentenced German mother insisted that non-Muslims must also be humiliated: Koran 9:29 — which calls on Muslims to war against Christians and Jews, until they pay jizya (tribute) and are “fully humbled” — requires it.

As for the murderous hate, Koran 58:22 goes as far as to praise Muslims who kill their own non-Muslim family members: “You shall find none who believe in Allah and the Last Day on friendly terms with those who oppose Allah and his Messenger — even if they be their fathers, their sons, their brothers, or their nearest kindred.”

According to Ibn Kathir’s mainstream commentary on the Koran, this verse refers to a number of Muslims who slaughtered their own non-Muslim kin.  (One slew his non-Muslim father, another his non-Muslim brother, a third — Abu Bakr, the first revered caliph of Islamic history — tried to slay his non-Muslim son, and Omar, the second righteous caliph, slaughtered his relatives.)  Ibn Kathir adds that Allah was immensely pleased by their unwavering zeal for his cause and rewarded them with paradise (The Al Qaeda Reader, 75–76).

Verses that support the divisive doctrine of al-wala’ wa’l-bara’ permeate the Koran (see also 4:89, 4:144, 5:51, 5:54, 6:40, 9:23, and 60:1).  There is one caveat, captured by Koran 3:28: when Muslims are in a position of weakness, they may pretend to befriend non-Muslims, as long as the hate carries on in their hearts (such is taqiyya; see here, here, and here for examples; for other Islam-sanctioned forms of deception, read about tawriya and taysir).

Little wonder, then, that America’s supposed best Muslim “friends and allies” — such as Saudi Arabia and Qatar — have issued fatwas calling on all Muslims to “oppose and hate whomever Allah commands us to oppose and hate, including the Jews, the Christians, and other mushrikin [non-Muslims], until they believe in Allah alone and abide by his laws, which he sent down to his Prophet Muhammad, peace and blessings upon him.”

Indeed, because enmity for non-Muslims is so ironclad in the Koran, mainstream Islamic teaching holds that Muslim men must even hate — and show that they hate — their non-Muslim wives, for no other reason than that they are “infidels.”

If Muslims must hate those closest to them — including fathers, sons, brothers, and wives — simply because they are non-Muslims, is there any surprise that so many Muslims hate foreign “infidels” who live oceans away — such as Americans, who are further portrayed throughout the Muslim world as trying to undermine Islam?

In short, jihad — or terrorism, war on non-Muslims for no less a reason than that they are non-Muslims — is simply the physical realization of an ignored doctrine that precedes it: Islam’s unequivocal command for Muslims to hate non-Muslims.  So ironclad is it that a German woman, on converting to Islam, and thus being duly instructed in al-wala’ wa’l-bara’, came to hate fellow Germans, to the point of sacrificing her own son in a foreign nation in the name of Islam.