Then the Kohen Gadol Chilkiyahu said to the scribe Shafan, “I have found a scroll of the Teaching in the House of Hashem.” And Chilkiyahu gave the scroll to Shafan, who read it. 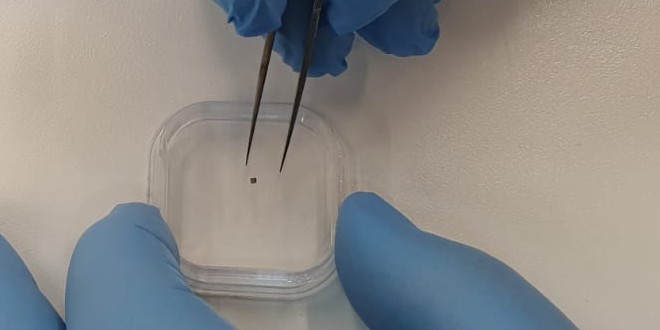 Israel365 has produced the impressive Israel Bible, but what is the Nano Bible? Scientists at the Technion-Israel Institute of Technology in Haifa say it is the most innovative and smallest copy of the Bible in existence.

They engraved the 1.2 million letters of the Bible on a gold-plated layer of silicone – a surface the size of a grain of sugar – using a focused ion beam. The ancient text on the chip can be read only by using a microscope capable of 10,000 times magnification. While creating the Nano Bible, the Haifa researchers sought to demonstrate the wonders of miniaturization and how this ultimate modern-day miniaturization can be used.

At the end of March, Israeli astronaut Eytan Stibbe will set off for the International Space Station as a member of the Ax-1 crew and as part of the Rakia mission. Stibbe will take the Nano Bible with him.

The unique technological item was lent to him by Jerusalem’s Israel Museum in Jerusalem, where it is currently on display in the Book Hall alongside the famed Dead Sea Scrolls.

The idea of miniaturizing the Bible was conceived in 2007 by Prof. Uri Sivan, who is now president of the Technion, and Dr. Ohad Zohar of the Russell Berrie Nanotechnology Institute (RBNI), as part of an educational program intended to increase young people’s interest in nanotechnology. The production of the chip and development of the software that allows engraving to be carried out was developed by engineers in the Technion’s Zisapel Nanoelctronics Center (MNFU).

“The Bible is the oldest and most important text for the Jewish people and one of the most important for the entire world. It’s a cornerstone of human culture,” said Sivan. “The Nano Bible being taken into space connects distance and time, the past and the future, and ancient human culture with modern technology.”

“The Nano Bible that I’ll take to the International Space Station symbolizes harmony between groundbreaking technology and respect for our heritage as humanity,” said Stibbe. “Creating a copy of this ancient text using innovative technology allows us to look into the future with hope while remembering our past. I’m looking forward to the opportunity to look at this technological marvel as I float in space.”

To mark the Jubilee celebrations of the Israel Museum that were held in Jerusalem seven years ago, Technion engineers prepared a special copy of the Nano Bible, which was presented in the Hall of Books – the renowned Aram Tsuba Crown from the 10th Century. The exhibition first presented the 21st Century Nano Bible against the backdrop of the Dead Sea Scrolls. Additional copies were specially prepared at the Technion and awarded to Pope Benedict XVI and to the Dibner Library in the National Museum of American History in Washington, D.C., which is part of the Smithsonian Institution.

The Rakia mission is led by the Ramon Foundation in cooperation with the Israeli Space Agency and the Ministry of Innovation, Science and Technology. The underlying aim of Rakia is to recognize the prospective benefits of space exploration. Its purpose is to draw on the curiosity associated with human space travel and to unleash its creative potential by raising awareness to the importance preserving Earth’s limited resources and fostering a commitment to international collaborations and the advancement of space research.

As an educational effort, students, educators, researchers, intellectuals and the general public will be stimulated by their exposure to the many scientific experiments conducted on board the space station and equally by the demonstrations of the use of Israeli technology, said the organizers. The mission’s educational goals will be furthered by the live transmission of educational content to Israeli children and the unique opportunity to see Israeli art being made and exhibited.