Western Europe may unite to form their own military; A development consistent with Gog-Magog War

Be ready, prepare yourselves, you and all the battalions mustered about you, and hold yourself in reserve for them.

Home » Western Europe may unite to form their own military; A development consistent with Gog-Magog War 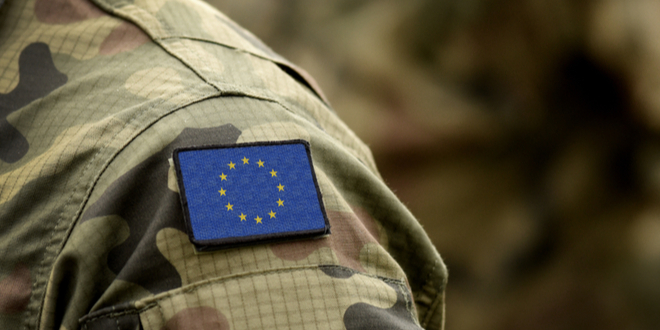 Several European nations responded to Russia’s invasion of Ukraine by building up the defense budgets. The calls for a multi-national European Union military are even more concerning in a decidedly pre-Gog and Magog development.

In a televised speech on Wednesday night, French President Emmanuel Macron renewed his calls for an EU army, saying that Europe had entered a “new era” and would need to boost investment in military defense and energy independence.

“We can no longer depend on others to feed us, care for us, inform us, finance us,” Macron said. “We cannot depend on others to defend us, whether on land, at sea, under the sea, in the air, in space, or cyberspace. In this respect, our European defense must take a new step forward.”

“Our European defense needs to pass a new stage,” Macron said. “We can no longer depend on others and notably on Russian gas to move around, heat ourselves, and make our factories work.”

Macron added that Europe must “pay the price for peace.”

‘Freedom already a given.’

“War in Europe no longer belongs in our history books or school books; it is here, before our eyes,” Macron continued. “Democracy is no longer considered an unquestionable system; it is questioned, before our eyes. Our freedom of our children is no longer a given. To this brutal return of tragedy in history, we must respond with historic decisions.”

He also placed blame for the conflict firmly on Putin.

“Putin, alone and deliberately, chose this war,” Macron said, emphasizing that the invasion of Ukraine did not include NATO. “This war is not a conflict between NATO and the west on one side and Russia on the other; there are no Nato troops or bases in Ukraine.

A fight against Nazism

“This war is even less what the unfounded propaganda would have you believe, a fight against Nazism. That’s a lie, an insult to the history of Russia and Ukraine, to the memory of our elders who fought side by side against the Nazis. Russian leaders are attacking the memory of the Holocaust in Ukraine as they attack the memory of the crimes of Stalinism in Russia,” Macron added.

Macron has long been advocating for an EU military independent of NATO. At an address in the former Western Front in Verdun in 2018, Macron warned of Russian aggression while stating that Europe cannot rely on the US.

“I want to build a real security dialogue with Russia, which is a country I respect, a European country,” Macron said. “But we must have a Europe that can defend itself on its own without relying only on the United States.”

Macron has acted on this belief of a dialogue with Russia, meeting with Putin 11 times over the past month. This Franco-Russian candor led  Secretary of State Antony Blinken to travel to Paris on Tuesday to hear from Macron directly about his latest conversations with Putin.

Forming an EU military force is expected to be one of the topics discussed by EU leaders at an informal summit this week in Versailles. They are investigating the possibility of building a rapid deployment force of 5,000 soldiers. This will be independent of NATO, whose thirty members represent a combined fighting force of 3.2 million soldiers.

Steps have already been taken in this direction as, for the first time, the EU is financing the purchase of lethal weapons for countries under attack, a decision that European Commission President Ursula von der Leyen described as a “watershed moment.” As EU treaties prevent the expected budget from bankrolling military operations, the EU will provide Ukraine with a €500 million fund under an off-budget instrument known as the European Peace Facility. Two traditionally non-aligned countries, Finland and Sweden, also deliver arms to help the Ukrainian army. Even Switzerland, a non-EU member state, is joining in sanctions against Russia. Poland announced its intention on Friday to increase defense spending to 3% of GDP on defense next year, a 1% increase.

France is currently the largest military in the EU as Great Britain left the organization in 2020. But many nations are changing their military policies in the wake of Russian aggression. German Chancellor Olaf Scholz announced an immediate injection of $110 billion into the NATO defense fund. He also pledged that Germany would reach the defense target set by NATO of two percent of a member state’s GDP.

The Danish government announced that for the first time since 1989, they will boost defense spending to meet NATO’s 2% of GDP target by 2033, up from its current 1.44% share. They will also hold a referendum on the 30-year-old opt-out clause that has kept Denmark away from the EU common defense policy.

This multinational entity grew as the EU announced on Monday that they would formally assess Ukraine, Georgia, and Moldova applications to join the bloc.

Rabbi Pinchas Winston, a prolific end-of-days author, emphasized the War of Gog and Magog as described in the Book of Ezekiel as a multinational conglomeration.

“Lacking prophecy, it is impossible to say for sure what is going to happen, but events are lining up in a troubling fashion,” Rabbi Winston said. “Sanherib set up an entire United Nations in his time just to come against Israel.”

Rabbi Winston cited the Talmud (Sanhedrin 94a), which described Sanherib as a potential leader of Gog and Magog.

The Holy One, Blessed be He, sought to designate King Hezekiah as the Messiah and to designate Sennacherib and Assyria, respectively, as Gog and Magog, all from the prophecy of Ezekiel about the end of days (Ezekiel, chapter 38), and the confrontation between them would culminate in the final redemption.

“This is forming up the same way,” Rabbi Winston said. “The only question is whether the potential will be realized.”

Rabbi Winston had one final word of advice to navigate the troubling current events.

“You gotta believe,” he said.

Of Gog and Magog.

The Holy One, Blessed be He, sought to designate King Hezekiah as the Messiah and to designate Sennacherib and Assyria, respectively, as Gog and Magog, all from the prophecy of Ezekiel about the end of days (Ezekiel, chapter 38), and the confrontation between them would culminate in the final redemption.

“This is forming up the same way,” Rabbi Winston said. “The only question is whether the potential will be realized.”

Rabbi Winston had one final word of advice to navigate the troubling current events.

“You gotta believe,” he said.